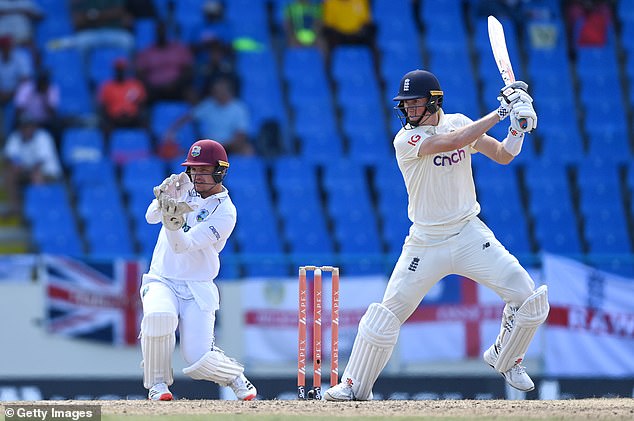 By James Cohen For Mailonline

England erased their deficit from the first innings for the loss of just one wicket in the first session on day four of the first test against West Indies on Friday.

Joe Root (20) and Zak Crawley (45) were unbeaten as England advanced to 72 for one at lunch in their second innings, an overall lead of eight runs in North Sound on the island of Antigua.

Test debutant Alex Lees (6) was the player to go, the left-hander trapped lbw by Kemar Roach for the second time in the match.

Roach set up the dismissal nicely, sending down several balls outside off during his spell before angling one back in and rapping Lees on the front pad.

The inevitable review showed the ball would have cannoned into leg stump, sending the disappointed opener on his way for a cumulative contribution of 10 runs for the match.

Earlier, West Indies were all out for 375 in their first innings.

The hosts added only two runs to their overnight score before losing their final wicket when Jayden Seales was out lbw for a duck to spinner Jack Leach on the third ball of the day.

Nkrumah Bonner top-scored for West Indies with a marathon nine hour-plus 123, while captain Kraigg Brathwaite (55) was the only other player to reach a half century.

The England bowlers shared the spoils, with Ben Stokes, Craig Overton and Leach each getting two wickets.

Five sessions remain in a test that to date has provided bowlers with little help on a slow flat pitch.

The match is the first in a three-test series in the Caribbean, where England have enjoyed only one series victory in the past half century.