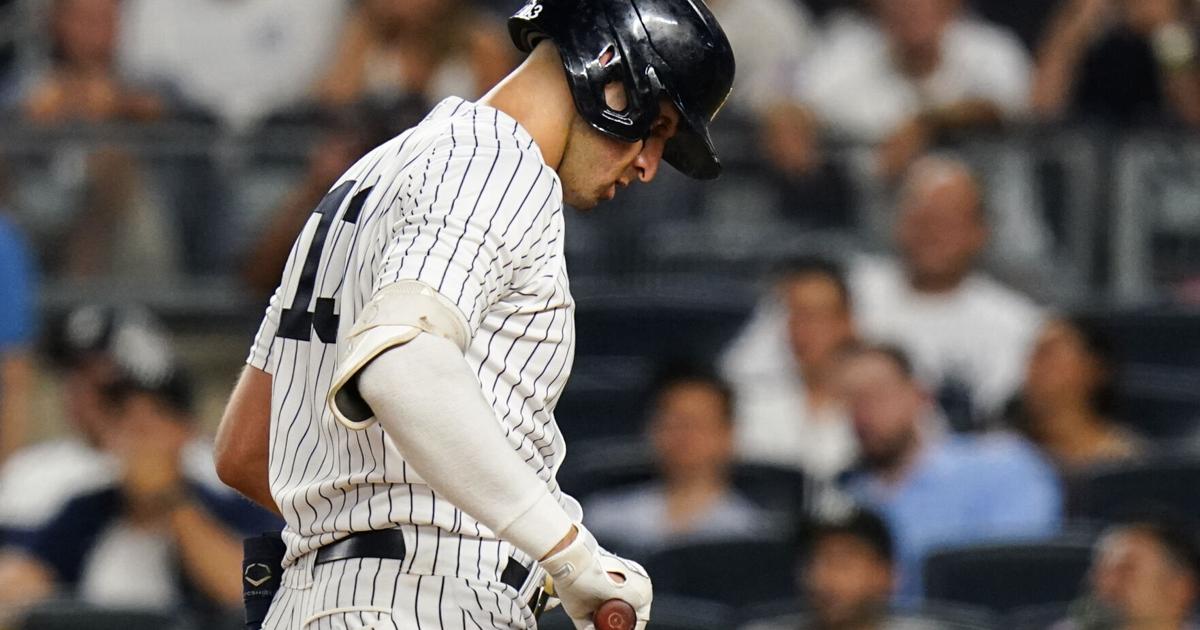 Here’s a look at trending news for today, Aug. 2:

NEW YORK (AP) — Joey Gallo’s unproductive tenure with the New York Yankees ended when he was traded to the Los Angeles Dodgers on Tuesday for minor league right-hander Clayton Beeter.

The 28-year-old outfielder was acquired from Texas on July 29 last year and hit .159 for the Yankees with 25 homers, 46 RBIs and 194 strikeouts in 421 at-bats. He was booed repeatedly by fans at Yankee Stadium, lost playing time in recent weeks to Matt Carpenter and became superfluous when New York acquired Andrew Benintendi from Kansas City last week.

“I have a lot of respect for how he worked, how he carried himself,” Yankees manager Aaron Boone said. “A lot of us really feel for the situation he was in and the burden he felt and carried.”

Tiger Woods turned down an offer worth approximately $700-$800 million to join the Saudi-backed LIV Golf series, according to the tour’s CEO Greg Norman.

During an interview on Fox News that aired on Monday, former world No. 1 Norman was asked by Tucker Carlson if it was true that Woods was offered $700-$800 million to join the LIV Golf series.

“That number was out there before I became CEO,” Norman replied. “So, that number’s been out there, yes. Look, Tiger’s a needle mover, right?

“So, of course, you’re going to look at the best of the best. They had originally approached Tiger before I became CEO, so, yes, that number is somewhere in that neighborhood.”

“Bullet Train” certainly moves at an appropriately brisk pace, with Brad Pitt heading a sprawling cast. But the breakneck action is offset by a smart-alecky tone that proves both uneven and occasionally too cute for its own good, along with a mashup of styles — from the music to the visuals — that comes across like a Quentin Tarantino wannabe, with a dash of “Deadpool” for good measure.

That latter influence shouldn’t be surprising, since director David Leitch oversaw the “Deadpool” sequel, in addition to toiling in the “John Wick” and “Fast & Furious” franchises. The Tarantino echoes are also heightened by Pitt’s presence, having shown off his playfully macho side in that director’s films, most recently winning an Oscar for “Once Upon a Time in … Hollywood.”

Read more of the review here:

President Joe Biden has announced that al-Qaida leader Ayman al-Zawahri was killed in a U.S. drone strike in Kabul. Biden is hailing the operation as delivering “justice” while expressing hope that it brings “one more measure of closure” to families of the victims of the Sept. 11, 2001, attacks on the United States. The president said in a Monday evening address from the White House that U.S. intelligence officials tracked al-Zawahri to a home in downtown Kabul where he was hiding out with his family. The president approved the operation last week and it was carried out Sunday. Al-Zawahri and Osama bin Laden plotted the 9/11 attacks.

U.S. House Speaker Nancy Pelosi has arrived in Taiwan. She is the highest-ranking American official in 25 years to visit the self-ruled island claimed by China, which quickly announced that it would conduct military maneuvers in retaliation for her presence. Pelosi arrived aboard a U.S. Air Force passenger jet and was greeted on the tarmac at Taipei’s international airport by Taiwan’s foreign minister and other Taiwanese and American officials. She posed for photos before her motorcade whisked her unseen into the parking garage of her hotel. Her visit has ratcheted up tension between China and the United States.

Another round of rainstorms are hitting flooded Kentucky mountain communities. The rain fell Monday as more bodies emerged from the sodden landscape, and the governor warned that high winds could bring another threat — falling trees and utility poles. Gov. Andy Beshear said the death toll rose to 37, and hundreds of others remain unaccounted for. Radar indicated that up to 4 more inches of rain fell Sunday. The National Weather Service warns that slow-moving showers and thunderstorms could provoke more flash flooding through Tuesday morning.

Russia’s Supreme Court has declared Ukraine’s Azov Regiment a terrorist organization. That designation could lead to terror charges against some of the captured fighters who made their last stand inside Mariupol’s shattered steel plant. Russian forces and their allies are holding an estimated 1,000 Azov fighters prisoner, many since their surrender in mid-May. Russian authorities have opened criminal cases against them, accusing them of killing civilians. The addition of terrorism charges could mean even longer prison sentences and fewer rights. The Azov Regiment dismissed the high court ruling, accusing Russia of “looking for new excuses and explanations for its war crimes.” It urged the U.S. and others to declare Russia a terrorist state.

A Texas man convicted of storming the U.S. Capitol with a holstered handgun, helmet and body armor has been sentenced to seven years and three months in prison. The sentence imposed Monday is the longest so far among hundreds of Capitol riot cases. Prosecutors said Guy Reffitt told fellow members of the Texas Three Percenters militia group that he planned to drag House Speaker Nancy Pelosi out of the Capitol building by her ankles, “with her head hitting every step on the way down,” according to a court filing. Reffitt was the first person to go on trial for the Jan. 6, 2021, attack.

The Republican Party’s embrace of Donald Trump’s election lies is being tested in Arizona. Voters on Tuesday are choosing between candidates who say they wouldn’t have certified the results of the 2020 campaign and those who argue it’s time to move on. The Arizona races are poised to provide important clues about the GOP’s direction. In Michigan, conservative commentator Tudor Dixon won the GOP primary for governor days after Trump endorsed her. In Missouri, Attorney General Eric Schmitt won the Republican nomination for senator. And voters in Kansas were the first to weigh in on abortion rights since the U.S. Supreme Court revoked a woman’s constitutional right to an abortion.

Missouri Attorney General Eric Schmitt has defeated scandal-scarred former Gov. Eric Greitens and 19 others in the Republican primary for U.S. Senate. Republican leaders have long feared that a Greitens win would jeopardize a red state Senate seat in the November general election. Greitens resigned four years ago in the midst of a sex scandal, two criminal charges that were eventually dropped amid a very real risk of impeachment. This year, his ex-wife accused him of abuse. Republican Sen. Roy Blunt’s announcement last year that he would not seek a third term set off a frenzy for his job, with nearly three dozen people in the two major parties filing to run.

Republican primary voters in Arizona and Kansas are deciding whether to elevate loyalists to former President Donald Trump who support his false claims that he won the 2020 election and send them to the general election. The GOP primary elections for secretary of state on Tuesday are the latest this year to feature candidates who doubt the security of their states’ elections despite the lack of evidence of any problems widespread enough to change the results. A secretary of state primary in Washington state includes one candidate who has made voter fraud claims without evidence.

Three Republican U.S. House members who voted to impeach Donald Trump over the Jan. 6 insurrection are being challenged in Tuesday’s primary elections by rivals endorsed by the former president. The primaries for Reps. Peter Meijer, Jaime Herrera Beutler and Dan Newhouse are the biggest test yet for GOP incumbents who broke with Trump after a mob of his supporters stormed the U.S. Capitol last year. Trump has vowed revenge against the 10 House Republicans who voted to impeach him. In other races Tuesday, two Democratic incumbents in Michigan are competing in a newly drawn congressional district.

American basketball star Brittney Griner is back in court for her trial for cannabis possession amid U.S. diplomatic efforts to secure her release. The WNBA star and two-time Olympic gold medalist returned to court on Tuesday, a month after her trial began. She could face 10 years in prison if convicted. As her trial has progressed, the Biden administration has faced growing public pressure to get her released. In an extraordinary move, Secretary of State Antony Blinken last week spoke to his Russian counterpart, Sergey Lavrov, urging him to accept a deal under which Griner and Paul Whelan, an American imprisoned in Russia on an espionage conviction, would go free.

Authorities say two more bodies have been found within the burn zone of a huge Northern California wildfire, raising the death toll to four in the state’s largest blaze of the year. The Siskiyou County Sheriff’s Office says in a statement that search teams discovered the bodies Monday at separate residences along State Route 96. Two bodies were also found Sunday inside a charred vehicle in the driveway of a home near the tiny unincorporated community of Klamath River.  More than 100 homes, sheds and other buildings have burned in the McKinney Fire since it erupted last Friday.

Family members from three of Florida school shooter Nikolas Cruz’s 17 victims gave heartrending testimony about how their 2018 deaths at Parkland’s Marjory Stoneman Douglas High School have affected their lives. The families of Joaquin Oliver, Alaina Petty and teacher Scott Beigel detailed Monday lost loves, lost moments and even fading memories. Oliver’s sister glared at Cruz as she left the witness stand, while other families appeared not to look at him. Cruz pleaded guilty to the 17 murders that happened on Valentine’s Day 2018. The jurors are deciding whether he will be sentenced to death or life without parole.

Beyoncé is the second artist to remove an offensive term for disabled people from a new song after complaints. Both Beyoncé and rapper Lizzo decided to remove the word “spaz” from their lyrics. The word is considered a derogatory reference for a form of cerebral palsy. Lizzo acknowledged her mistake in June after her song “Grrrls” used the word and re-released a new version without it. Beyoncé uses the word in her song “Heated,” from her new record “Renaissance,” out Friday. Disability advocate Hannah Diviney, who pointed out Lizzo’s lyrics, wrote that hearing the word again used by Beyoncé “felt like a slap in the face.”

Tiger Woods turned down a Saudi offer Greg Norman says was in the neighborhood of $700 million to $800 million. Norman confirmed a figure he previously told the Washington Post. Norman was speaking to Fox News’ Tucker Carlson for an interview aired Monday night. The interview took place Sunday at Trump National in Bedminster, New Jersey. That’s where the third LIV Golf Invitational was held. Norman says he wasn’t the CEO of LIV Golf when Woods got the offer. Woods has spoken out against the Saudi-funded league. He says players who sign are turning their backs on the PGA Tour.