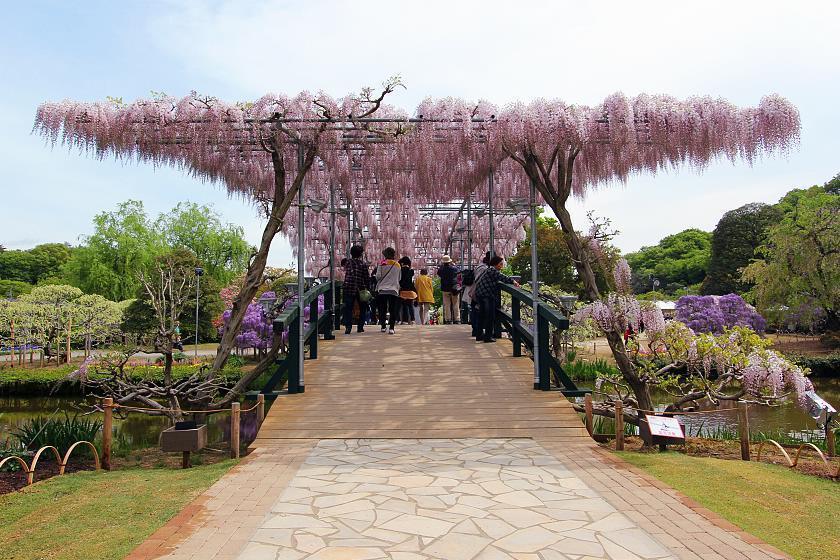 Today I traveled to Ashikaga Flower Park in Ashikaga, Tochigi Prefecture to take in some of the floral delights the park has to offer. The park boasts spectacular displays of seasonal flowers at various points throughout the year, but is particularly well known for its wisteria flowers that typically come into full bloom around late April to mid May and invariably draw in droves of flower fanatics.

The park can be reached from central Tokyo in under two hours if riding the shinkansen, and in around two and half hours using local trains. The relatively easy accessibility of the park makes it a great day trip idea for those staying in the capital. It is advised however to arrive early during peak seasons, as the park can get packed!

I arrived this morning just as the park opened and immediately went in search of wisteria. I didn’t have to look far before I found myself under one of the numerous wisteria trellises about the park, including one made up partly of the park’s famous old purple wisteria that is over a century old. The wisteria today were a mixed bag, with many trees being at different stages of bloom. In general, the purple wisteria looked to be around a day or two from full bloom, whilst the pink wisteria seemed to be on the verge of full bloom.

I got chatting with one of the park staff and she revealed the expected best viewing dates of some of the park’s varieties of wisteria. According to her, the purple wisteria are generally expected be in full bloom until late next week, whilst the white wisteria’s best viewing period is estimated to be from May 1 to May 11. The yellow kingusari that resemble wisteria and make up the park’s Tunnel of Golden Chain are not expected to enter their best viewing stage until the week after next. These estimations made sense looking around the park this morning, with the white wisteria and yellow kingusari trees generally looking bereft of petals.

Wisteria aside, the park is packed with a wide variety of flowers, many of them looking to be spectacularly in full bloom at the moment and giving the park a tinge of vivid color at every turn. There are even a few late-blooming cherry trees dotted about the grounds for good measure. The park is lit up every evening from 17:30 until 21:00, ending May 14th, meaning now is a great time to visit, by day or night.