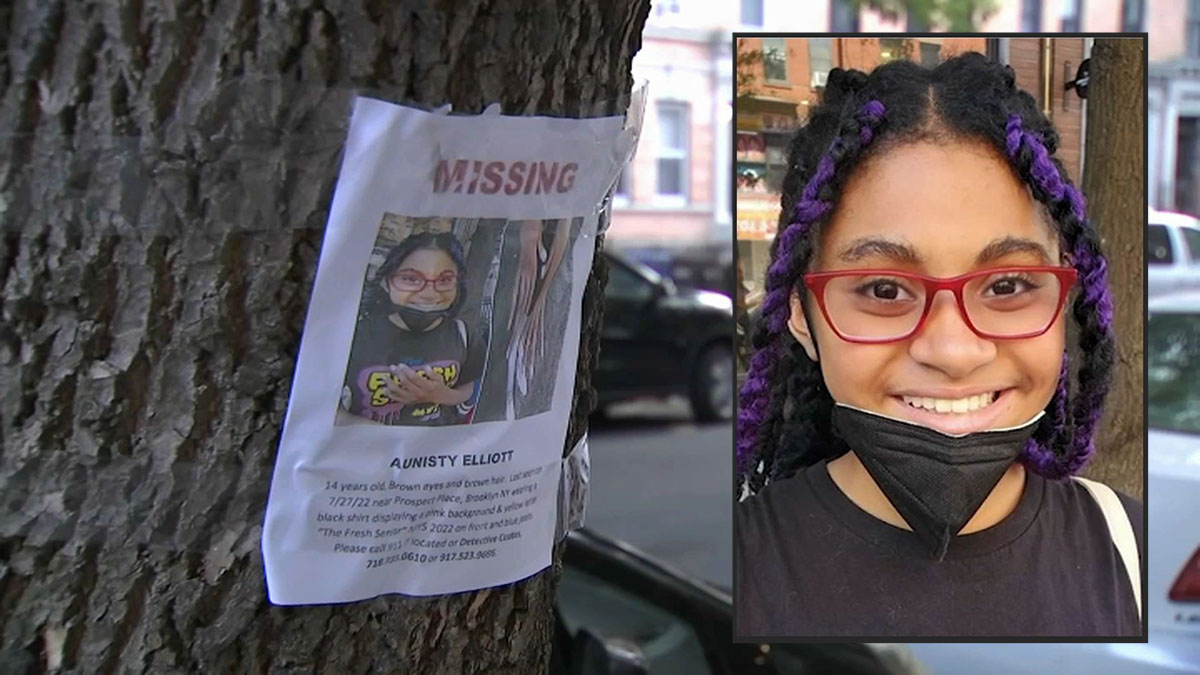 A Brooklyn mother is making a desperate plea to find her teenage daughter, who left home following an argument and has not been seen for nearly a week — and as her mother fears the worst, the family is beginning to question the police response to her case.

The heartbroken mother, Racquel Caines Elliot, and a loyal group of family and officials have been passing out flyers, asking people to take a good look at the photo. It’s of 14-year-old Aunisty Elliot, who is missing, the family said.

“You come home — you hear me baby? I’ll see you soon, alright?” the mother said at a press conference Tuesday afternoon at Grand Army Plaza. “She has to be afraid, she’s never been without me.”

It was July 27 when the family says that Aunisty left the family’s home, without telling anyone she was leaving. She has not returned since then.

Aunisty wasn’t allowed to have a cell phone, but she did have a computer, her mother said. Elliot said her daughter was upset because she took her computer away, but she’s never done anything like this before.

“I am a mother and I did what I thought I should do. She left two days after the computer was taken,” said Elliot. “She knew she was gonna get it back. I don’t know what happened.”

Those who know her say Aunisty is a good, studious kid who never got into trouble.

The family says police have been following leads and looking for Aunisty, but they are frustrated that no one picks up the phone when they call the number on the flyer. They fear that when Black girls go missing, it doesn’t spark the kind of enough outrage needed to bring them back home.

“I learned about the case today. My office learned about it today, and she’s been gone for seven days. That is shameful,” said Brooklyn City Councilmember Crystal Hudson. “This city should be knocking on every door and turning over every stone.”

In response to the ongoing search for Aunisty, the NYPD said they have interviewed the teen’s friends, canvassed for video, taken possession of her laptop, subpoenaed her social media accounts, used social media facial recognition, and notified human trafficking. The department said they also searched hospitals and have put out radio transmissions about the missing teen in Brooklyn.

The family says Aunisty had dreams of becoming a cardiologist, and that she is a well behaved and trusting teen — with their greatest fear being that she might have trusted the wrong person.