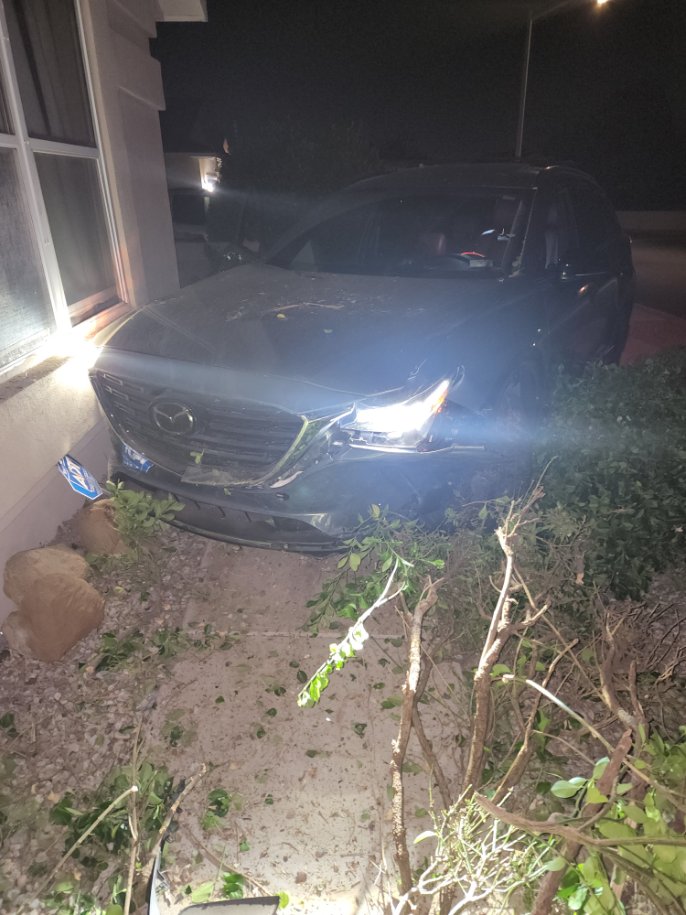 ALBUQUERQUE, N.M. (KRQE) – A peaceful Albuquerque neighborhood is on edge after a vehicle barreled into a home and the suspects took off. The whole thing was caught on camera.

In the video, the vehicle is seen speeding down Port Road NW near Central and Unser. The vehicle plows into the yard, hitting the home. From there, five suspects take off on foot, leaving a stolen Mazda behind in the front yard of Esperanza Palomin’s home.


Man accused of driving though Gallup parade held until trial

“So they drove past, almost hit that light post, hit (my neighbor’s) carport post. Then came up and hit this bush, ran into the bush, and then just went in. This rock, right here, was underneath the vehicle that heightened the vehicle so it like tucked over,” Palomin said.

She was on her way home from an evening out when she heard about the news from a neighbor. Her ex-husband was sleeping just inches away from the crash. “I find out that he was asleep in the room, in the master bedroom, which is right here behind me, and that he heard a loud boom. He didn’t know what was going on, it woke him up and that he heard people jumping out of the vehicle,” she said.

The suspects abandoned the vehicle, leaving behind alcohol, and even an apparent bullet hole on the side of the vehicle.

Palomin says it was her garden that stopped the vehicle in its tracks. “If it wasn’t for that bush and this rock here. If it wasn’t for those two items, that vehicle would have gone into our house because it came fast around that curb.”

Now, she’s stuck paying the bill to replace her front yard and the damage done to the home. “It’s just devastating when you come, you work hard, and then we’re trying to get ready to sell our house and here we are. This is a stumbling block here,” Palomin said.

The Albuquerque Police Department confirmed the vehicle was stolen and said no arrests have been made at this time. They are currently investigating.