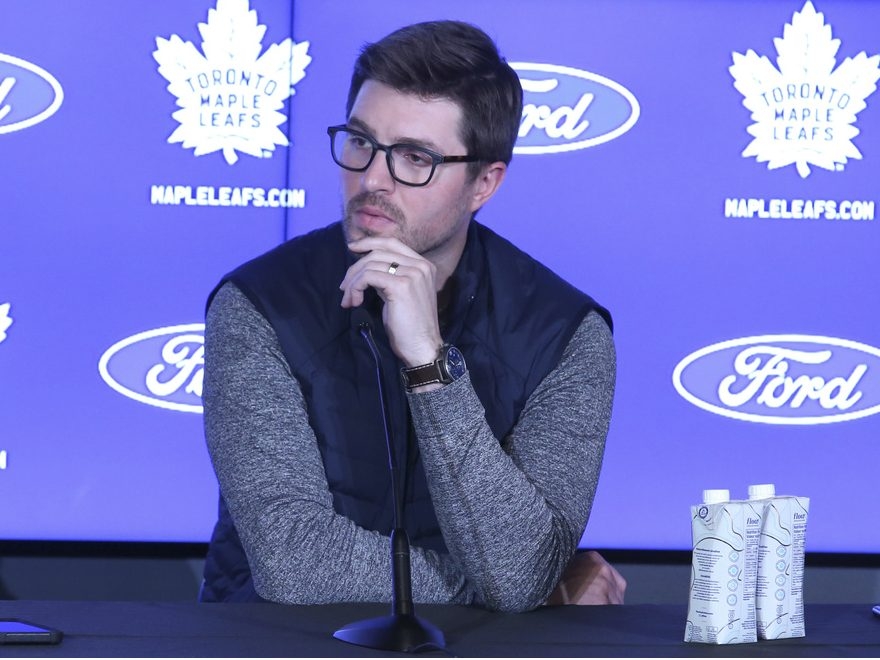 It was sometime last month when Toronto Maple Leafs GM Kyle Dubas met with team president Brendan Shanahan in hopes of negotiating a contract extension, only to be told that there would be no extension coming.

Not yet, anyway. Maybe not ever.

It will all depend on what this team does — or more importantly, where it finishes — at the end of this season.

Win a Stanley Cup or get close to at least competing for one and Dubas, who is on the fifth and perhaps final year of a deal he signed in 2018, will be coming back. Fail to advance past the first round and Dubas won’t necessarily be fired. Then again, you probably won’t have to. You can just let him expire.

In other words, it’s truly a make-or-break year for the Leafs.

“What do you mean by make or break?” asked Dubas on the first day of training camp on Wednesday. “I’ll tell you first off, our goal is not to win one round and get into the second round. Our goal is to win four (rounds). Our goal is to win the Stanley Cup. That’s what we set our mind on every day and there’s no thought on amongst anyone that works in this facility about anything less than that and what the repercussions are going to be or not be.”

Already, we’re starting to see glimpses of those consequences.

The decision to not extend Dubas may have been based on a wait-and-see approach after four straight years of failing to get out of the first round of the playoffs. But it was also based in part on what Dubas did — or didn’t do — this summer.

Dubas didn’t make a big trade. He didn’t bring in a true No. 1 goalie or significantly upgrade a defence that will start the year with Rasmus Sandin still looking for a contract and Timothy Liljegren on the injured list. With the exception of a few and insignificant small moves, he mostly stood pat, believing that this group is still capable of breaking through and winning a championship.

It’s a belief that others in the organization sound like they are starting to become skeptical of.

“We’re an organization that preaches accountability. And in my position, I don’t view myself as any different,” said Dubas. “I fully expect to be judged on the full body of my work over the five-year term of my contract. And I have zero issue to be evaluated over the entire body of work here. I have full belief in our players and our staff and in our group that we’re going to have a great season.”

This was not Dubas betting on himself. Rather, it was Dubas betting on the core group of four forwards — Auston Matthews, Mitch Marner, William Nylander and John Tavares — who account for nearly 50% of the salary cap.

This was the summer where Dubas could easily have changed things up. Where he could have taken a risk by trading Nylander for a top-pairing defenceman or done something even more shocking, like what Florida Panthers GM Bill Zito did when he packaged Jonathan Huberdeau, MacKenzie Weegar and a draft pick to the Calgary Flames for Matthew Tkachuk.

Maybe that is why he didn’t get extended. Who knows, maybe it will be his eventual downfall.

Either way, his future in Toronto is out of his hands now. That is, unless the lack of job security encourages him to be more aggressive at the trade deadline than he was in the off-season. It’s part of the downfalls of having a lame-duck GM in charge at such a critical time for a franchise that is beyond impatient.

This is Dubas’s group. This has been his grand experiment.

He was the one who signed John Tavares to a $10-million cap hit and who made Auston Matthews and Mitch Marner two of the highest earners in the league. He was the one who fired Mike Babcock and hired Sheldon Keefe. He is also the one who painted himself into a financial corner and had to let heart-and-soul winger Zach Hyman walk as a free agent last year and then said goodbye to goalie Jack Campbell this summer.

On paper, this year’s team might not seem to be any better than last year’s team. In fact, it might be a little worse.

Meanwhile, the Atlantic Division didn’t get worse. Tampa Bay, Florida and Boston are once again expected to battle Toronto for one of the top-three playoff seeds. But with Ottawa, Detroit and Buffalo ready to make the jump after having made significant improvements in the off-season, the battle for wild card spots also got a lot more competitive.

Toronto is still considered a Cup favourite. But we’ve been saying the same thing for the past four years. Now, for the first time, jobs are on the line — Dubas’, along with Shanahan’s and Keefe’s.

“I don’t obviously decide what the organization wants to do. I can only control what I can do each day,” Dubas said. “My view of it is that if we have the year that we’re capable of and the team plays the way that it’s capable of, my situation will get taken care of without issue. I don’t worry about it.”