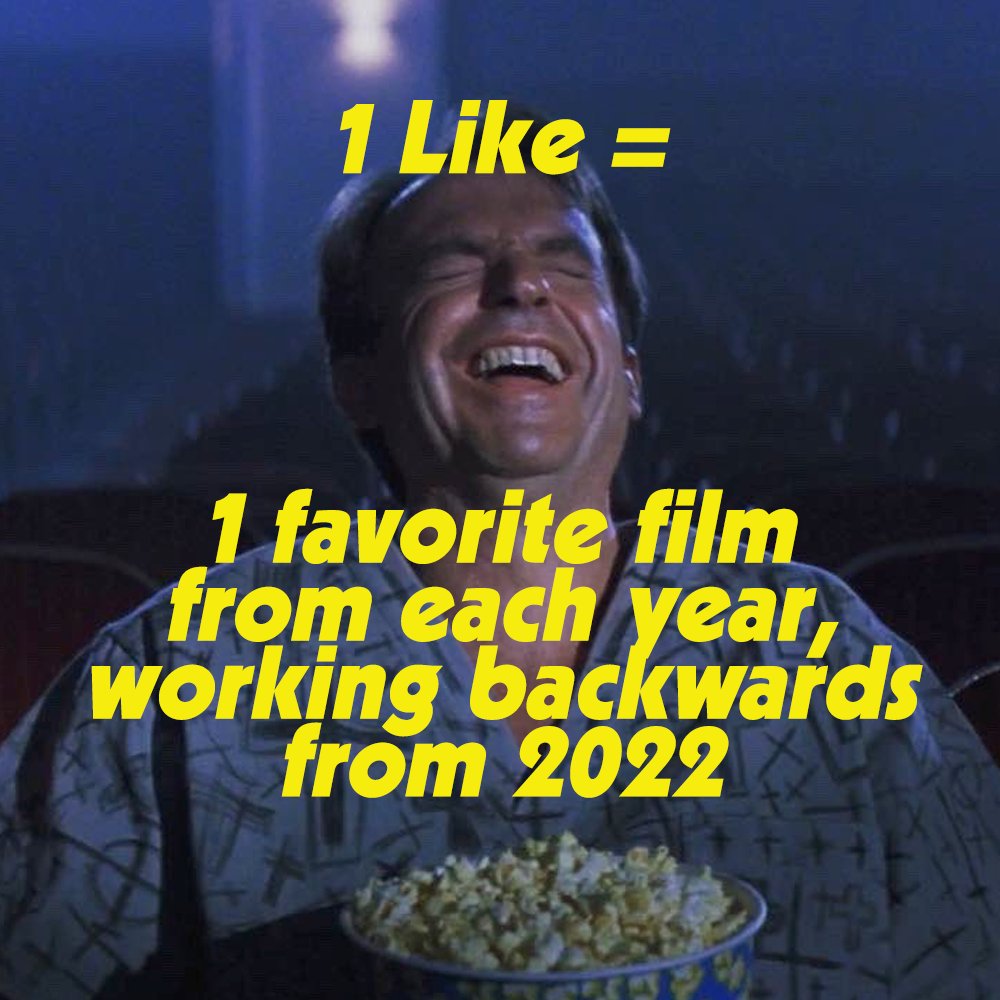 Last Thursday afternoon, I decided to occupy myself by creating one of those “1 Like = 1 Opinion” Twitter games. You may have seen this sort of thing before, where for each user who likes a particular post, you’re required to add another entry to a list of some sort, like “1 Like = One Hot Take about New York.” You hope to get enough engagement that you feel nourished by the attention, but not so much that you run out of things to say and start spouting nonsense. It’s a well-tread format, so if you want to create a fresh one, you have to put an additional spin on it.

Looking to post some Film Content and engage with friends and followers, I chose to add the element of time. My prompt was: “1 Like = 1 favorite movie from each year, working backwards from 2022.” I threw together a quick image using a screengrab from John Carpenter’s In the Mouth of Madness, posted it on Twitter, and followed it up with my answers going back to 1964, proportional to the respectable but not overwhelming number of sweet, sweet Faves I received from the public.

The following day, I got a second little treat: my game was spreading, first to Twitter friends, then to more distant relations inspired to take on the challenge. By the end of Friday, my prompt had become Film Twitter’s meme du jour, and kept going from there. In my 13 years on Twitter, I have never gone viral on purpose, though I’d chosen not to watermark the image and was now watching my baby appear on the feeds of people with hundreds of thousands of followers without credit. So did I go viral?

There were, however, silver linings to be found. I enjoyed the conversations started by my goofy experiment, and I’d finally contributed something of value to the world of Film Twitter. Also, I had a chance to document the phenomenon, and — not coincidentally — Monetize That Shit.

Throughout the weekend, I earmarked every instance of the meme that came across my screen, whether or not I was familiar with the poster. I rummaged some examples from strangers by searching for popular answers, leading me to threads, leading me to quote retweets of more threads, etc. I created a spreadsheet and recorded each poster’s favorite film from each year, whether they flamed out within a decade or made it all the way to the birth of cinema. I tried to be consistent by using the results from the first 50 lists I found, discarding nothing, which added up to 1,849 data points. While not exactly scientific, it does create a window into the subculture of Film Twitter, a self-selecting sample of people who have the confidence to dare someone to ask for their favorite movie from 1973. (This group disproportionately represents individuals who have Letterboxd accounts.)

My study yielded some interesting results, revealing which films and filmmakers are most commonly agreed upon, and which eras generated the widest variety of culturally important films. What massive hits do respondents still stand behind? Which flops are they eager to endorse? As time passes, do opinions become more similar, or more diverse? I was surprised by some of the findings, though others were very predictable.

Anyone who’s spent time among American cinephiles this year would easily guess that Everything Everywhere All at Once, the Michelle Yeoh-starring, genre-mashing indie darling by director duo Daniels, was the most commonly picked favorite film of 2022. EEAAO was one of the most dominant competitors in my sampling (as well as my own pick), chosen by 14 of the 50 list-makers. Tollywood historical blockbuster RRR came in a distant second with 4 picks, tied with Jordan Peele’s Nope, which was released only a week ago. Other recent years were much more competitive: No film ran away with 2021 (where the frontrunners were The Green Knight, Pig, and The Power of the Dog) or 2020 (split by Birds of Prey, The Invisible Man, and Palm Springs). 2019 hosts two of cinephiles’ favorite modern films, Bong Joon-ho’s Best Picture-winning Parasite (9 votes) and the Safdie Brothers’ famously snubbed thriller Uncut Gems (10 votes). There were, however, some heavy favorites throughout the rest of the 2010s. Spider-Man: Into the Spider-Verse (2018) and Get Out (2017) were both box office hits that won the cinephiles’ endorsement, and no movie dominated its year more completely than Mad Max: Fury Road, which received nearly half of all of 2015’s votes.

When it comes to contemporary films, however, there are certain titles that are considered box office failures but which are beloved amongst People Who Post About Movies Online. The year 2016 was handily won by The Nice Guys, a Shane Black detective comedy that barely recouped its budget but has since acquired a vocal cult following. 2011’s winner and runner up, Nicolas Winding Refn’s Drive and Joe Cornish’s Attack the Block, are both indie darlings. While nearly every Edgar Wright feature received at least one vote (no one stuck their necks out for Last Night in Soho), his best performer by far in our sampling was Scott Pilgrim vs. the World, which won 2010 with 7 out of 38 votes. The Coens’ comedy A Serious Man edged out Tarantino’s wildly popular Inglourious Basterds for 2009. The Wachowskis’ box office bomb Speed Racer won a competitive 2008 against chart-toppers The Dark Knight and WALL-E and critical favorites In Bruges and Synecdoche, New York.

Looking back further, there are some generational classics that appear to still be ironclad. The Lord of the Rings: The Return of the King, The Matrix, Jurassic Park, Raiders of the Lost Ark, Alien, and Star Wars won 2003, 1999, 1993, 1981, 1979, and 1977, respectively, all by significant margins. On the other hand, some classics faced such steep competition that no film could be crowned a clear winner. American Psycho and O Brother, Where Art Thou? came in neck and neck for 2000. 1994 was a tie between Pulp Fiction and In the Mouth of Madness (though its image appearing at the top of every list was surely a help). Who Framed Roger Rabbit? just barely edged out Die Hard for 1988, as did The Princess Bride over RoboCop for 1987. 1980, where popular answers were The Shining and The Empire Strikes Back, was too close to call, as were 1985 with Ran and Back to the Future, and 1976, which was Rocky vs. Taxi Driver. Not even The Godfather was safe, winning 1972 by only one vote over Bob Fosse’s Cabaret, within any reasonable margin of error. Steep competition wasn’t enough to muddy 1982’s result, though, as The Thing trounced the year’s other beloved (and higher-grossing) sci-fi films E.T., Blade Runner, and Star Trek II: The Wrath of Khan.

Some years offer such a variety of beloved films that no frontrunners emerged at all. Twenty-five different films were named as favorites for 2008, with Brick and Batman Begins being the only three-time picks. No film was named more than twice for 1998 or 1995, even though half of the lists in our sample extended through the nineties. Our sample size decreased significantly going into the 1970s, but the lens of history did not tighten. The years 1975 (Jaws, Monty Python and the Holy Grail), 1971 (Fiddler on the Roof, McCabe & Mrs. Miller) and 1970 (Patton, Catch-22) offered no obvious favorites. Only eight of our lists continued to 1965, but every one of them named a different film for that year. Die-hards were united about only a few years before 1950, with The Third Man and Citizen Kane each receiving the majority of votes for 1949 and 1941.

Looking at the bigger picture, some interesting trends emerge across multiple lists. Most users avoided repeating directors (sometimes apologizing for repeats), but that didn’t stop some filmmakers from making many appearances throughout the sample data. Only one participant in my sample named two Quentin Tarantino films, but his entire filmography between 1994 and 2012 turns up in our data. Fifteen Coen Brothers films (including Joel’s The Tragedy of Macbeth) were selected, but no participant contributed more than two. The filmmakers who appeared in my data most often without running away with any given year were Spike Lee, Hayao Miyazaki, and Paul Thomas Anderson.

But our real winners were contributors Colette Arrand and MightyGodKing, who each answered their followers’ demand to complete the game, going all the way back to the birth of motion pictures in 1887 and skipping as few years as possible. Their picks for that year were Capybara Walking and Man Walking Around a Corner, two of the earliest sequentially assembled photographs in history. MightyGodKing earned his title by not drawing a blank until 1917 and picking one film each from a total of 121 years. There may be more users out there who completed the entire gauntlet, but despite several people in my sample receiving Likes in the triple digits, only two braved the complete history of cinema, and I salute them.

Personally, I’m gratified to have played a small part in keeping movie buffs occupied through the weekend. I received validation from seeing wiser cinephiles praise some of my personal favorites, and a few common recommendations from unaffiliated sources. (I, evidently, really need to check out the 1958 Hammer Films classic Horror of Dracula.) And as much as many of the popular picks perpetuate the stereotype of the male auteur-worshipping Film Bro, the most exciting data on my graph was when multiple lists highlighted a film with which I wasn’t familiar, like Tongues United, a 1989 documentary about the Black gay community, or Branded to Kill, a 1967 yakuza drama. Most encouraging of all, reading lists from top to bottom revealed that individual tastes are not confined to a particular genre. Horror fans know horror best, but the same person who picks Black Christmas for 1974 might pick Tampopo for 1985. Even those who prefer high-brow dramas will tip their hats to a great action movie, and everyone enjoys a good laugh. We can establish a consensus, but there’s no single definition of great cinema. Even most people have more than one.