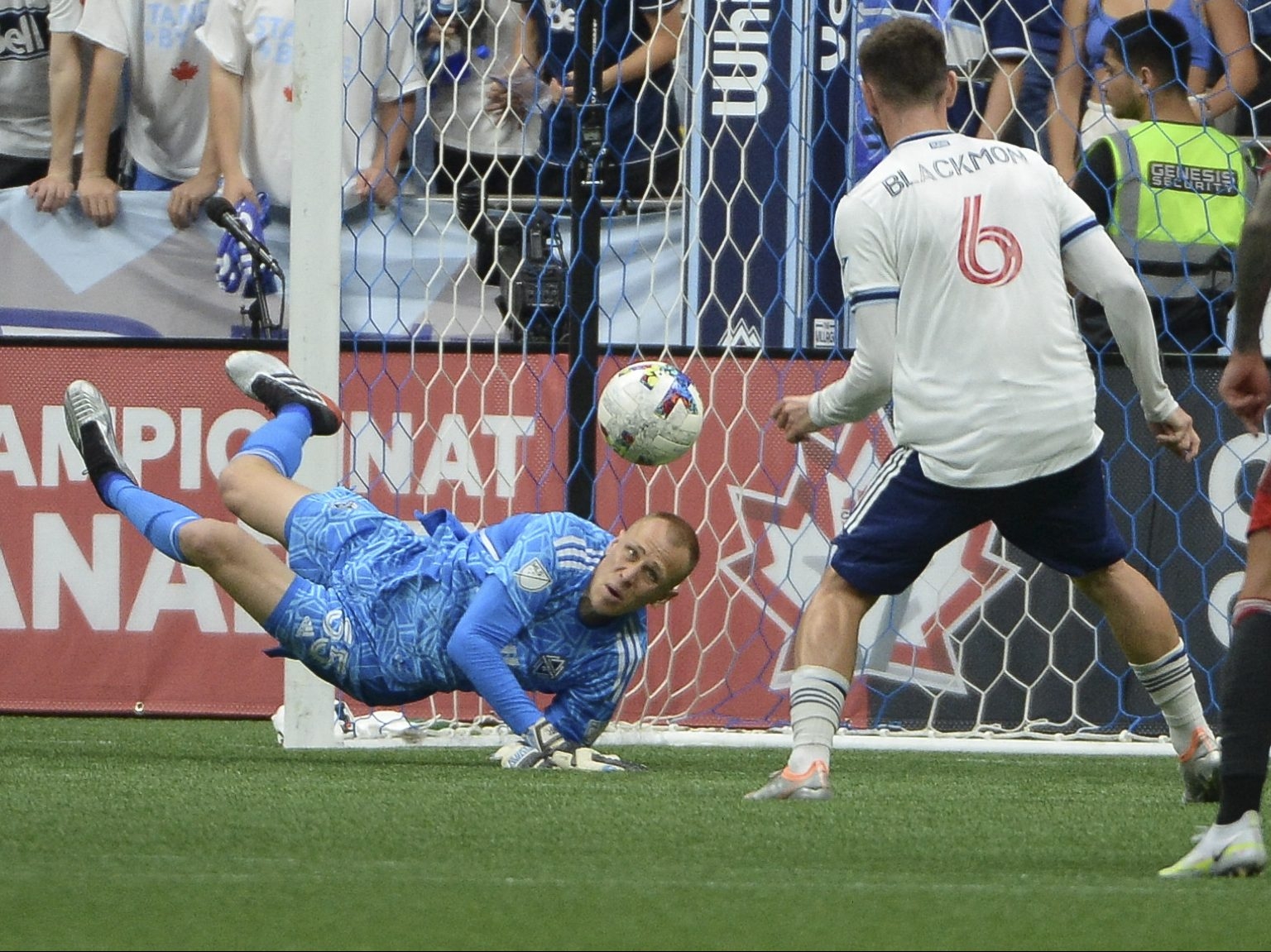 Vancouver Whitecaps coach Vanni Sartini pulled off his shirt and ran onto the BC Place field in celebration after his club won the 2022 Canadian Championship final on a penalty kick shoot-out victory over Toronto FC on Tuesday night.

The ’Caps went a perfect 5-5 in penalty kicks with Tristan Blackmon taking the final shot to win it for Vancouver, sending the crowd of 24,307 into ecstasy. It was the second Canadian Championship title for the Whitecaps who have now qualified for the 2023 Concacaf Champions League. The only TFC player to miss on the penalty kicks was midfielder Jonathan Osorio, who happens to be the all-time leading scorer in Canadian Championship history. The Brampton native was the third to kick for Toronto and hit the goal post.

Toronto won the 2020 Voyageurs Cup in June (a competition that was postponed for two years because of the COVID-19 pandemic) in penalty kicks over Forge FC in Hamilton.

The two sides fought to a 1-1 draw in regulation time. Brian White scored in the 19th minute to put Vancouver ahead 1-0 and centre back Lukas MacNaughton scored his first goal for TFC when he headed a perfect cross from Federico Bernardeschi into the goal after a corner kick with 15 minutes left in the game to tie it 1-1.

TFC coach Bob Bradley started all three new Italian internationals in the match, Lorenzo Insigne, Bernardeschi and Domenic Criscito. It could have been fatigue, the artificial turf or a lack of games recently, but the big Italian three was not as dynamic at BC Place as it was in Saturday’s match in the 4-0 victory over Charlotte FC when Insigne and Bernardeschi made their Reds debuts, though both attacking juggernauts ramped up the pressure in the second half.

Insigne was finally taken out of the game in 87th minute, clearly a tough decision for Bradley as he didn’t want to overplay him. On the other hand, with penalty kicks looming, the Italian winger would have been a huge weapon for Toronto. As TFC trailed after the first half against Vancouver, Bradley felt compelled to keep Insigne and Bernardeschi on the field likely longer than he wanted to as Toronto plays New England Revolution at Gillette Stadium in Foxborough, Mass. on Saturday night — a crucial match as the Revs are one of six teams standing between Toronto and a playoff spot.

Bradley was without new midfielder Mark-Anthony Kaye, who picked up an injury in Saturday’s match against Charlotte. Jayden Nelson was inserted into the starting XI in Kaye’s place.

Toronto has won a record eight cup titles, but couldn’t add a ninth on Tuesday night on the west coast.

Vancouver played with home field confidence right off that bat while TFC certainly did not seem to carry the same swagger from Saturday’s win over Charlotte though it held a huge edge in possession in the first half.

TFC keeper Alex Bono made a good save seconds into the game on a Lucas Cavallini try in front of the goal. Cavallini, a Toronto native, left the game in the 73rd minute and played well, at both ends of the field.

White scored his goal after Ryan Gauld made a excellent cross to the far side of the goal and White headed it in past Bono from the left side of the six yard box.

Bono made a second good save on Hamilton native Ryan Raposo in the 29th minute after another good set-up by Gauld. Raposo just missed putting the Whitecaps ahead 2-0 in the added time in first half when he right-footed a cross from Andrés Cubas towards the far post but just missed.

Toronto forward Jayden Nelson just missed from close in early in the second half as TFC continued to dominated possession in the second half, though the Whitecaps did a commendable job shutting down the Reds in the final third.

TFC’s perseverance paid off when MacNaughton tied it 1-1 in the 75th with a header right in front of the Vancouver goal after the world-class cross by Bernarndeschi.

Bono made a huge save on Vancouver substitute Tosaint Ricketts in the 80th minute when a lunging save to keep the match tied after a great pass in front from White.