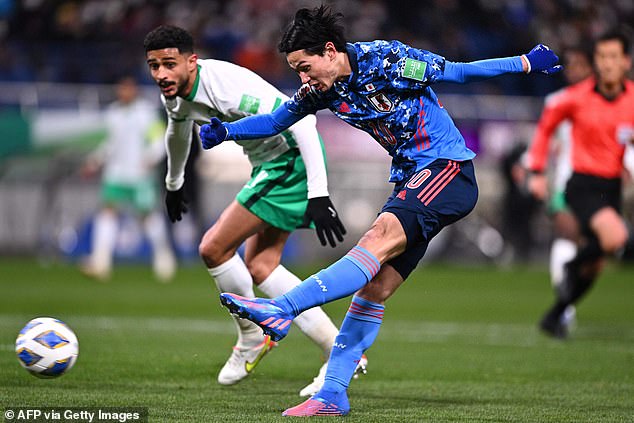 Liverpool forward Takumi Minamino got on the scoresheet on Wednesday as Japan eased past Saudi Arabia 2-0 in Saitama to edge closer to booking their spot at this year’s World Cup.

The 27-year-old gave his nation the lead in their crucial qualifying match when he got on the end of Junya Ito’s cross and hit his shot with enough venom to squeeze past goalkeeper Mohammed Al-Owais.

Ito then doubled Japan’s lead five minutes after the break with a sensational strike from the edge of the area that flew into the top corner.

This result means that Japan have won both of their games during the current international break without conceding a goal, and they will return to action in March against Australia, hoping to seal their place in Qatar.

Minamino’s performance in his homeland was particularly impressive given that it came off the back of speculation regarding his future at Liverpool.

In the final days of the January transfer window, Minamino was linked with a switch to Leeds and Monaco. However, neither move materialised as he ended up staying at Anfield.

It has been revealed that this was Minamino’s decision to remain on Merseyside as he wants to fight for his place in Jurgen Klopp’s team between now and the end of the season, according to The Telegraph’s Mike McGrath.

Minamino has not started a single league game for the Reds this term, with Mohamed Salah and Sadio Mane occupying the wide positions for the majority of the campaign thus far.

He appears to feel that he could still get opportunities in the second half of the season, though, despite the recent arrival of Luis Diaz from Porto, which looks set to make competition for places even fiercer.

With Salah and Mane both still away at the Africa Cup of Nations for now, Minamino could get a rare chance to impress on Sunday when Liverpool take on Cardiff City in the fourth round of the FA Cup.