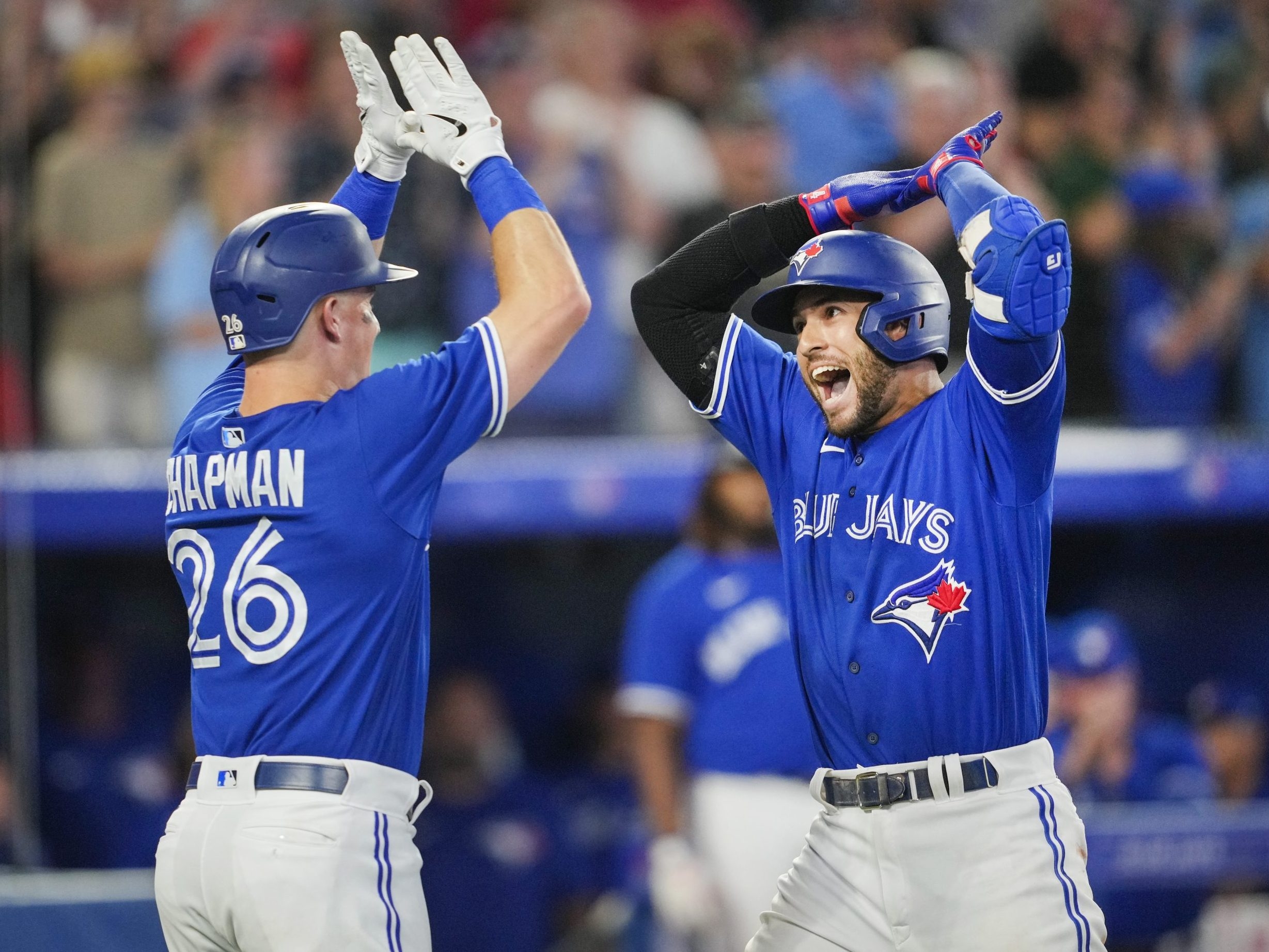 George Springer stole the show Tuesday night with one swing of his mighty bat.

It was an emotional, heartfelt evening with Hall of Fame person and baseball personality Buck Martinez returning to the TV booth and future Hall of Fame player Albert Pujols appearing in his penultimate game in Toronto before he calls it a career.

Each received warm and loud ovations, but none compared to the roars afforded Springer, whose grand slam sent Rogers Centre into a frenzy.

It was his seventh slam of his career and 18th home run of the season as the Jays toppled the St. Louis Cardinals, 10-3, in a battle of birds flying on different paths.

For Springer, it was his third hit of the game on a night every player in Toronto’s starting lineup recorded at least one hit.

These red-hot Jays have won seven games in a row and nine of 10.

Before this current streak began, the Jays had lost nine of 10.

Under interim manager John Schneider, the Jays have lost one game, but keep in mind the opposition hasn’t exactly been stellar.

The Cards came to town minus two of their best players in Nolan Arenado and Paul Goldschmidt because neither received the COVID-19 vaccination, a condition for entering the country.

St. Louis could have used both, but what the visitors needed more was pitching.

The hit parade was initiated early, but the Jays couldn’t create separation on the score sheet.

Then came the decisive sixth and the lethal blow launched by Springer on a 3-2 count.

In Toronto’s next at-bats, Alejandro Kirk went deep for his 12th bomb of the season.

Jays starter Jose Berrios couldn’t make it past the sixth inning, but he would join an exclusive club of Toronto pitchers.

After yielding a home run in the top of the first inning, Berrios was the recipient of a torrent of hits the Jays would use to score three runs to take a 3-1 lead.

The damage was mitigated when Santiago Espinal’s leap at second triggered a 4-3 double play in the fifth inning.

The Jays started Cavan Biggio at first base with Vladimir Guerrero Jr. serving as DH.

Vlad Jr. went deep in the first inning for his 21st homer on a two-run blast.

Berrios was making his 20th start of the season.

In each of his 11 starts at home, the Jays won, leaving him one game off the longest streak in club history set by Roy Halladay.

Tim Mayza earned the win, his fifth of the season.

Pujols gave Martinez a big hug prior to the game, which would see the veteran make only his eighth start of the season at first base.

He came to the plate in the first inning after the Cards took an early 1-0 lead on a Dylan Carlson home run.

In one of those rare moments when fans of the Jays cheer an opposing player with no ties to the city or club, Pujols received an overwhelming amount of support.

He was genuinely touched by the gesture and acknowledged the applause by fans by tipping his helmet.

Pujols announced way back in spring training that the 2022 season would be his last.

He began his illustrious run in the big leagues back in 2001 with the Cardinals.

He entered the night with a career batting average of .302 at Rogers Centre.

He flew out in his first at-bat.

In his second plate appearance, the ovation was polite, but hardly pulsating.

He singled to right field to knock in a run, a hit that received some applause by fans, even though the RBI single by Pujols tied the game, 3-3.

And according to a report by MLB Pipeline’s Jim Callis, the Jays signed the kid to a deal that exceeds his No. 23 overall draft slot.

Normally, the draft slot carries a value of US$3.0769 million.

Barriera, 18, is a left-handed pitcher whose signing means he is forgoing his commitment to play at Vanderbilt.

Barriera was selected out of Florida’s American Heritage School.

A lot of buzz has been created surrounding the fate of Juan Soto, the 23-year-old currently plying his trade in Washington whom many in the game have compared to the great Ted Williams.

With the trade deadline looming, one of the teams said to be in hot pursuit of Soto’s services are the Cardinals.

The Jays have been linked as well, but no one believes they’ll be able to engineer a deal that satisfies the Nats’ conditions.

Those in the know, better known as baseball insiders, say the Nationals want four to five elite prospects who are young and big leaguers with low service time.

Soto is on the block, but whether a deal gets done by next week is anyone’s guess.

Soto, for those not aware, declined a 15-year offer made by Washington worth a total of $440 million.

His higher-profiled clients have a history of routinely hitting free agency.

Hyun-Jin Ryu is among the higher-profiled players in the Boras stable, but the lefty did hit free agency and the Jays swooped in to sign the former Cy Young candidate who may have pitched his final time in Toronto following an elbow injury.