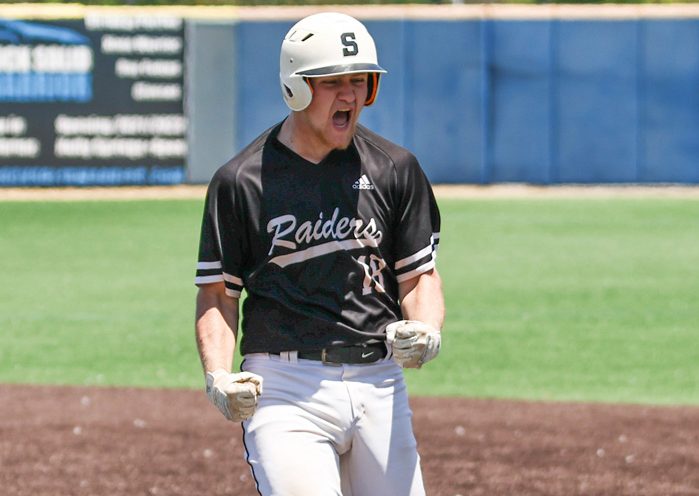 “That’s the nicest, politest catcher I’ve ever worked with,” the umpire told Chrismon. “He addressed me as Mister all night. No one’s ever done that.”

Ritchie may be the most gentlemanly catcher in the world, almost too good to be true, but good manners didn’t prevent him from being one of the toughest customers behind the dish.

All season long, Ritchie hung in there to make the rugged tags that cut down runners at the plate on Kane Kepley’s lone-hop lasers from center field and Nathan Chrismon’s bullets from shortstop. Ritchie bounced back from a potentially devastating injury in the Western Championship Series in record time and came through for his teammates time after time in the 3A State Championship Series.

“Polite, sure, but that’s a really tough kid and a really clutch kid,” Coach Chrismon said. “You can’t say enough about Ritchie and what he meant to our team’s success this season.”

Ritchie displayed a combination of character and determination that make him a perfect recipient of the third annual J.T. Bost Sportsmanship Award. He’s the first male winner from South. The first two were North Rowan’s Malcolm Wilson and Salisbury’s Christian Morgan. Andrew Poston, an umpiring colleague of Bost’s, sponsors the award.

“I remember Mr. J.T. very well because he would always work my middle school football games,” Ritchie said. “He was super-nice all the time, helping not only the players, but the younger officials. His death (in a motor vehicle accident in 2018) was tragic, but this award is his legacy going forward and it’s an inspiration.  I’m going to do everything I can in my life to honor his memory.”

Ritchie’s school year began with taking his lumps as a linebacker/tight end for South’s football team that was undermanned in most of its games in the South Piedmont Conference. The Raiders were 1-10.

“I got hurt in the homecoming game with Central Cabarrus and was limited to holding and punting for some games after that, but I wanted to try to come back and play in our last game,” Ritchie said. “We’re playing Carson, and I know it’s going to be my last football game, and I really wanted to end my career on a high note. I was playing linebacker, and there was a pileup, and I heard something in my leg pop. It was a difficult season.”

South head football coach Chris Walsh’s lasting memory of Ritchie didn’t come from a game. It was from the senior dinner.

“Jacob was so kind and gracious to my family that he made some fans for life,” Walsh said. “He made enough on an impression on my 5-year-old daughter that she wanted to go to the baseball games just to root for Jacob. He’s a fantastic young man. You wish every player would emulate him on and off the field.”

The ankle injury he suffered against Carson delayed his senior basketball season. By the time Ritchie was cleared to play in December, it was a season already headed for 0-22.

Ritchie gave everything he had and was South’s best player.

“Even if you’re playing someone like Central Cabarrus, your job is to give 100 percent and play as hard as you can down to the end,” Ritchie said.

He averaged double figures and had some huge rebounding games as a 6-foot-2 center, but it wasn’t enough to get South over the hump.

“When he was injured, we made him ‘Coach Ritchie’ for a while,” South coach Daniel Blevins said. “He’d do the fist-bumps with the opposing team when they were introduced. Officials would come over and shake hands with him before the game, thinking he was an assistant coach. He had a little fun with it. Then when he got healthy enough to play, any success we had was mostly due to him. He led us. In the gym or out of the gym, he’s someone you could always count on to do the right thing.”

Blevins said his youngest son is devastated that Ritchie won’t be around next season, but Ritchie gave back one last time to South basketball this summer.

“He didn’t have to but he wanted to work our first summer camp session,” Blevins said. “We gave him the third and fourth-graders just to test his patience. He was wonderful with them.”

The struggles of South Rowan football and basketball didn’t deflate Ritchie. He knew there was a chance for an epic spring baseball season with a seasoned group of seniors.

As South’s cleanup hitter, Ritchie enjoyed a phenomenal spring. Hitting behind a trio — Kane Kepley, Nathan Chrismon and Ty Hubbard — that was always on base, he drove in 37 runs.

“A lot of those RBIs were big hits,” Coach Chrismon said. “Lots of two-out hits and lots of two-strike hits.”

Ritchie shrugs and says anyone would have had a banner season hitting behind Kepley, Chrismon and Hubbard, but his contributions to the pitching staff were just as valuable. South’s front line trio of Haiden Leffew, Carson Crainshaw and Chandler Oddie went a stunning 27-3.

“As the catcher,  I tried to help all those guys be confident in their pitches,” Ritchie said. “All three made so much improvement this year, and it was rewarding for me to watch their confidence grow. Carson went from being a guy who was a little tight early in the season to being a guy pitching calmly and with total confidence with the state championship on the line. Chandler’s fastball may not be the fastest and his curve doesn’t break as much as some, but he can get guys out. He found his role and he believed in himself. Those three are my guys, and if one of them called me to catch a bullpen tomorrow at 6 a.m., I’d be there for him.”

Next for Ritchie is Appalachian State. He expects to room with three Carson athletes — Carter Dowd, Hunter Burris and Jordan King — and will major in exercise science.

Not surprisingly, the All-American boy is a guy with a plan for life. He wants to become a physician’s assistant.

Sports has been his life, so it’s going to be tough to leave the grind behind. But he moves on with a well-earned state championship ring and with a prestigious sportsmanship award that honors a man he respected a great deal.

“There are probably schools where I could play baseball, but I decided back in November that I was going to concentrate on academics in college and go to Appalachian State,” Ritchie said. “I’ll miss sports, but I feel fortunate to go out on top.”