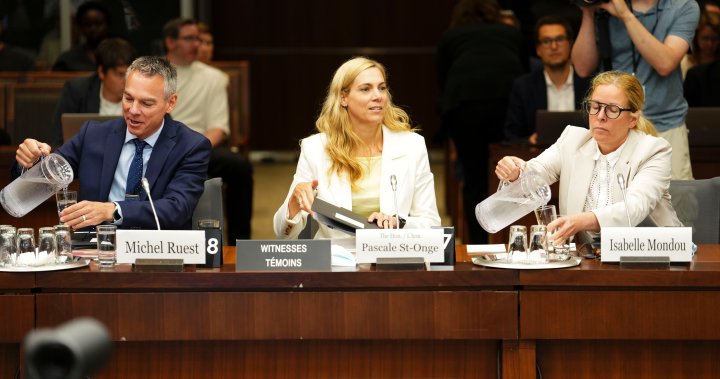 Sport Canada was aware of an alleged sexual assault tied to a Hockey Canada event in 2018 — but, according to a senior director of the organization, did not inform the sport minister’s office.

Michel Ruest told members of Parliament at a House of Commons heritage committee meeting Monday that no one followed up with the national governing body, either.

MPs immediately expressed their frustration with the revelation.

“For four years, not once did you or your organization follow up with Hockey Canada about these allegations? Is that what you’re telling me?” asked Conservative MP John Nater.

5:30
What will it take for Hockey Canada to rebuild the trust of hockey fans?

What will it take for Hockey Canada to rebuild the trust of hockey fans?

Sport Minister Pascale St-Onge, who also appeared before committee on Tuesday, did not hold her current ministerial role in 2018.

In a June 20 committee meeting, she shared that she was “informed of the affair a few days after the story broke in the media” — despite the fact that Sport Canada had been aware of the allegations since 2018.

St-Onge had been in her role as sport minister since December of 2021.

When it comes to cases like the 2018 allegations, Ruest said the minister’s office generally receives “statistics,” rather than specific information about cases, so they can get a “general idea” of what’s happening.

However, speaking on Tuesday, St-Onge defended Sport Canada’s decision to keep her in the dark.

“The information that Sport Canada received in 2018 was that there was an allegation of a sexual nature, but they didn’t have the details that came out in the media later,” she said.

“Sport Canada did not know the scope of what happened in 2018, they got minimal information.”

What are the allegations?

The comments come after two separate allegations of group sexual assault have rocked the world of Canadian hockey in recent months, prompting calls for widespread culture change in the sport.

In 2018, a woman filed a complaint saying eight unnamed players from Canada’s 2018 world junior team assaulted her while she was intoxicated at a gala event in London, Ont. The allegation made headlines when, in May, TSN first reported that Hockey Canada had quietly settled a lawsuit with the woman.

Global News reached out to the agents for all players who were on the roster at the time of the alleged incident. Several players have since released public statements denying their involvement. Read the full list of responses from the team in this online post.

2:03
‘It got to the point where I became suicidal’: Ex-player reflects on hockey’s toxic culture

‘It got to the point where I became suicidal’: Ex-player reflects on hockey’s toxic culture

Last week, reports surfaced that Hockey Canada maintained a fund that drew on membership fees to pay for uninsured liabilities — including sexual abuse claims. This information was included in a July 2021 affidavit sworn by Glen McCurdie, who was then Hockey Canada’s vice-president of insurance and risk management, as part of a lawsuit launched by an injured player in Ontario.

Last Tuesday, Hockey Canada said they would no longer use this fund for sexual abuse claims.

1:13
‘Hard for anyone in Canada to have faith or trust in anyone at Hockey Canada,’ Trudeau says

‘Hard for anyone in Canada to have faith or trust in anyone at Hockey Canada,’ Trudeau says – Jul 19, 2022

Then, on Friday, another allegation emerged. Hockey Canada and Halifax police both confirmed they are investigating an “alleged group sexual assault” that they say involved members of the 2002-03 world junior hockey championship team.

The backlash against Hockey Canada’s handling of the allegations has been swift. By late June, MPs had convened an initial parliamentary committee to grill Hockey Canada officials and sport minister Pascale St-Onge about the settlement of the 2018 allegation.

Not long after the committee convened on June 20, Hockey Canada lost corporate sponsorships and federal funding was frozen.

On Monday, Hockey Canada released its plan to combat any “toxic” behaviour in the sport. The plan includes the implementation of a centralized tracking and reporting system for abuse complaints by the end of September.

Hockey Canada also said it will implement enhanced screening for high-performance players and will mandate that breaching the organization’s code of conduct or refusing to participate in an investigation could result in a lifetime ban.

Speaking to the heritage committee on Tuesday, a lawyer from the firm conducting a third-party investigation into allegations of sexual assault against players from Canada’s 2018 world junior hockey team said her probe is still “ongoing.”

Danielle Robitaille, a partner at Henein Hutchison LLP, said she has interviewed 10 of the 19 players from the roster — though she didn’t specify who those players were.

She also interviewed seven members of staff, including coaches.

“I am laser focused on my conduct investigation,” she said.

“I appreciate that it’s very frustrating to Canadians that we don’t have an outcome yet,” Robitaille said.

“This is something that we have seen in the area of sexual violence in the justice sector as well. What I can say is justice takes time and my investigation is taking time.”

The lawyer frequently told the committee she was bound by Hockey Canada’s claims of solicitor-client privilege — including when members of Parliament asked what specific recommendations she provided to the organization in her interim report.

“I can indicate I’ve seen some implementation,” she said.

When pressed for specifics, she added that “there were recommendations around alcohol that were implemented.”

Meanwhile, as Robitaille works to finish her investigation, she said there are some outstanding concerns from counsel representing eight of the nine players she has yet to interview.

“They have expressed concern about my investigation — particularly as it relates to comments made by politicians and members of Hockey Canada — they have a concern that the issue has been prejudged,” she said.

“I am attempting to address those concerns and assuage those concerns, and I hope that I will receive voluntary compliance with my investigation.”

However, Robitaille added, Hockey Canada has empowered her to put the pressure on players who refuse to cooperate.

“Should a player not participate in my investigation, Hockey Canada has advised me that they will receive a lifetime ban in participating in Hockey Canada.”

— with files from The Canadian Press