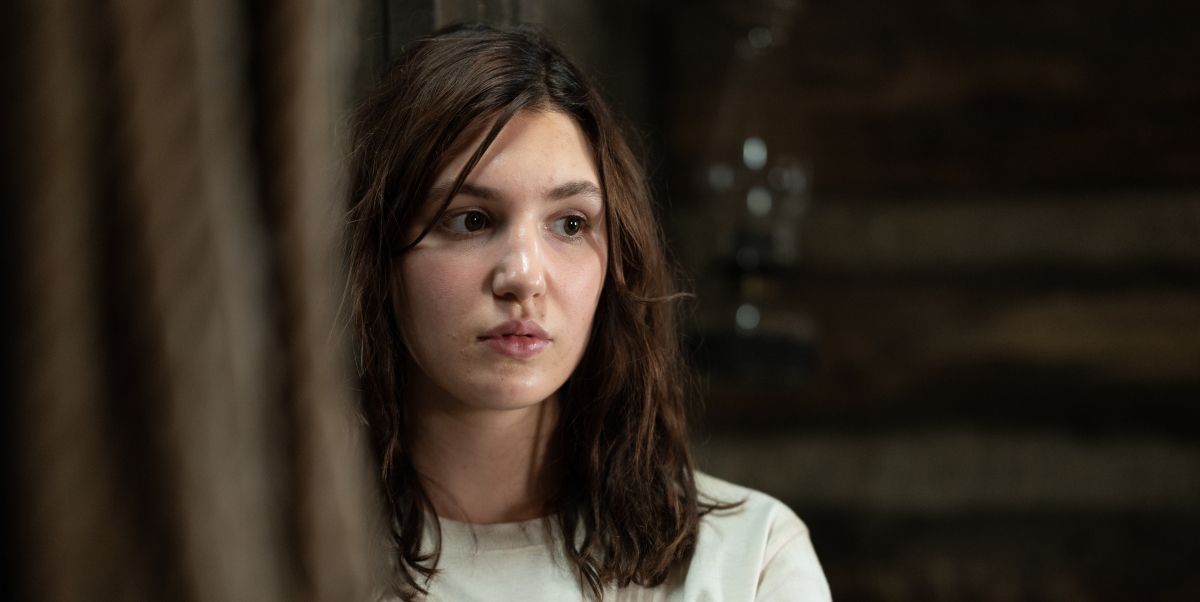 Unless you’ve been stranded in the remote wilderness for the last two months, you’re probably aware that it’s a Yellowjackets world and we’re all simply living in it. Showtime’s cooler version of Lord of the Flies is eating us all up with a sordid story of a high school girls soccer team who survives a plane crash that lands them in the not-so-great outdoors, where they remain left to starve–or not–for 19 months.

Thanks to impressive performances from veteran actresses like Juliette Lewis and Christina Ricci, who play the adult versions of the survivors, plus a band of breakout newcomers like Sophie Thatcher, Jasmin Savoy Brown, Sammi Hanratty, and Sophie Nélisse, it’s safe to say Yellowjackets has satisfied the TV bloodlust clearly craved by the masses.

Ahead of tonight’s Yellowjackets season finale, Cosmo spoke to series standout Sophie Nélisse (aka teen Shauna) about the show’s wildest fan theories, the future for our favorite spiraling teenagers, and the time she sat at a table read with Melanie Lynskey (aka adult Shauna) and thought, “I’m getting fired.”

Cosmo: This show has become a hit seemingly overnight because of how much it has to offer—a fresh story about women’s survival, well-realized characters, and sharp, suspenseful writing. What in particular drew you in?

Sophie Nélisse: When I came onto the project, I had only read the pilot and was hooked from the beginning because I loved every single character. I thought they were so unique but also complex. They had these gray areas where you cared for them but kind of hated them too.

I also loved that it was a mostly female cast who embraced their flaws, which we saw right off the bat in the pilot. For Shauna, there’s that early reveal of her sleeping with Jeff [her best friend’s boyfriend], and yet you’re still kind of rooting for her in a way. And even with Jackie, there’s something sweet about her and you care for her even though she is kind of a bitch (laughs).

One thing the audience learned about Shauna this season is she’s a very layered character whom we can’t always predict. What’s it been like for you to portray someone who maintains such an air of mystery? How much were you able to work with Melanie Lynskey [who plays adult Shauna] in determining how she should be read on screen?

Shauna has a little bit of every character. I think she has the leadership and the strength of Taissa, yet the kindness and sweetness of Laura Lee, but also the craziness of Misty. She can live very well and I think she can be quite unreasonable at times. There’s a lot more going on in her head than we think, and she definitely has this dark side that she herself is scared to admit is there.

With Melanie, I remember at the table read when I heard her speak for the first time–her voice is a higher pitch than mine–I thought ‘I’m getting fired.’ I was already shocked when I got the part because I don’t look like her at all, and then we didn’t even sound alike. But ultimately, we sat down for a couple of coffees and discussed the character and made sure we had the same idea of her. There were moments on set where I would start writing in her journal–and I’m a lefty–then be like, ‘Wait, how did Melanie write?’ and shoot her a text. It’s those tiny details right down to how she would tie her shoelaces that were important.

This first season includes political and social commentary on topics like sexual identity and abortion. The scene where Shauna decides to attempt to abort her baby is a real standout as it feels so relevant in this particular time. What was that like to film?

We all got chills when we read it because of the rawness of the scene. We wanted to treat it with the most respect possible because it’s an important subject. I think even more than the abortion itself, she’s putting her own life at risk and it’s the most vulnerable she’s ever been so far in the show.

It also says so much about Shauna that at the end of the day, she’s willing to sacrifice her own life in order to spare Jackie’s feelings. It was beautiful to get to do it with Jasmin [Savoy Brown, who plays teen Taissa], who was just an incredible partner in all of this. Even after the scene was done, we would just stare at each other like, ‘We did this.’ We had people on set helping us through the process and create what it would be like. It’s a hard scene to watch, but I’m glad I got to do it.

As of right now, Shauna and Jackie’s friendship has really been put through the wringer, and I have a feeling the finale is going to culminate in some kind of confrontation. Is there anything else you can share about the finale episode? Where is this friendship heading?

Some tears will definitely be shed, and it will reach its climax. I think there will be no turning back. So far, Shauna has always kind of been put in a box where she’s been told what to do, who to be, how to act, and after episode 9 she gets very annoyed of always having to feel guilty and the pressure that comes with that. There’s a breaking point when Shauna will finally get it off her chest.

Fan theories are all over the internet about lingering questions–from how the survivors are eventually rescued to who gets eaten first. Given all the foreshadowing, can we assume the Antler Queen is Lottie? And what do you think will become of Shauna’s baby?

Yeah, Lottie’s slowly starting to lead people in a certain way so I definitely think she’ll step into the role of some sort of leader. Then again, the girl running with the long black hair in the pilot looks a lot like Lottie, so I don’t know. I am hoping Lottie will be the Antler Queen because I love Courtney [Eaton, who plays Lottie] so much and I don’t want her to die.

And as for my baby, I think it wouldn’t survive because realistically, we’re deprived of sleep and nutrition so it just doesn’t make sense. I feel like it would die before she’d be able to give birth, but maybe she will and it won’t survive then? Maybe they’ll eat the newborn? I don’t know what they’re going to put in the second season, so it’s a possibility…but that would be the most disgusting thing I think I’d ever witness on TV.

This interview has been edited and condensed for clarity.