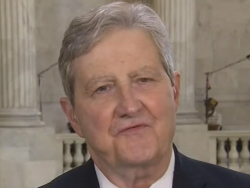 SEN. JOHN KENNEDY (R-LA): I support Speaker Pelosi’s trip to Taiwan unconditionally, but with an explanation. As petty and self-absorbed as Washington looks like from the outside, you ought to see it from the inside.

This entire exercise began with Speaker Pelosi’s ego. Now, when you’re talking about a nuclear war with China, you should take your ego out back and shoot it. But that’s not Speaker Pelosi’s way. She knows after the mid terms she’s not going to be Speaker anymore. She may not be in Congress anymore. So I think she thought up this trip as a way to say well, look at me one more time.

She talked to the White House and some knucklehead, either on Speaker Pelosi’s staff or the White House leaked it. And on top of that, President Biden spoke publicly about it and said ‘Oh, maybe she shouldn’t go.’

Well, at that juncture, she had to go. Because weakness or the appearance of weakness invites the wolves.

So I’m glad the speaker went but if she really wanted to demonstrate strength from the United States of America, she would have made it a bipartisan trip. She would have brought Kevin McCarthy along, she would have brought the Secretary of Defense along. But no, it’s her. It’s the Speaker Pelosi Show and added benefit of all this is that we’re not talking about inflation or crime or the open border or her husband’s stock trades. And that’s the way this town works.