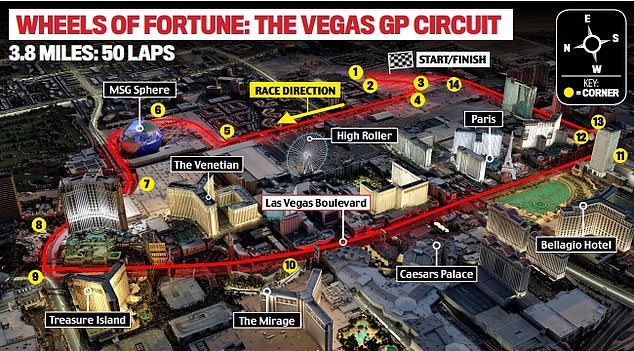 F1 drivers Sebastian Vettel and Sergio Perez back £1bn Las Vegas Grand Prix but urge bosses not to lose ‘historic’ and traditional tracks… while Lewis Hamilton wants SOUTH AFRICA to return to the calendar after 29 years!

By Ian Ransom For Reuters Jonathan Mcevoy For The Daily Mail

Formula One drivers on Friday welcomed the prospect of racing in the bright lights of Las Vegas next season but said the championship should try to respect history and keep its traditional races in Europe.

Las Vegas will join Austin and Miami as the third race in the United States in the 2023 calendar as F1 looks to make further inroads into the lucrative market.

The championship’s expansion into new territory has put some of the older European races under scrutiny, with F1 boss Stefano Domenicali warning that some might need to make way for new ones elsewhere.

The 3.8-mile circuit will consist of 50 laps and roar past iconic venues such as Caesars Palace

Four-times world champion Sebastian Vettel said while it was exciting to have new destinations on the calendar, it would be a shame to drop older European races like Monaco or Monza in Italy.

‘Obviously there is financial interest in new places that we are going to and F1 is a business. But I think for us it’s a sport; it’s a passion,’ the Aston Martin driver said.

‘So we don’t see it as a business.

‘Places mean something because of the history they have or the tradition they have.

‘I think it needs a sort of mixture between exploring but also holding onto places that have history.’

Red Bull’s Sergio Perez was thrilled with the prospect of Las Vegas joining the calendar but said F1 needed to keep its ‘historic tracks’.

‘And we have to make sure that when we go to new venues, to really have some character on the tracks, you know,’ said the Mexican.

‘I felt like some of the new tracks kind of lack a bit of character. So that will be very important.’

Rather than receive a fee from the host city, as is usually the case, F1 will themselves promote the event.

Sources believe this could accrue more than £100million per race. If the arrangement lasts for a decade, as is minimally hoped, the billion-pound mark should be exceeded, making Las Vegas the most lucrative grand prix ever.

Lewis Hamilton wants South Africa to return to the map, having last hosted a race in 1993

Nearly 30 years have passed since the country hosted an F1 race in 1993, and Africa is the only inhabited continent which does not feature on the current calendar.

‘We’re pretty much on every other continent, so why not?’ said Mercedes driver Hamilton.

‘And ultimately, my ancestors are from there so that’s why it is important for me personally.’