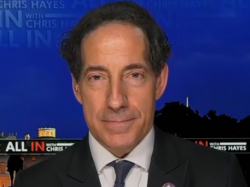 Rep. Jamie Raskin (D-MD) said Wednesday on MSNBC he has “entered so much” of Donald Trump’s head that he can see his “blood thirst for power” and predict the former president’s next move.

“I guess the sad thing for me is that I have entered so much in Donald Trump’s head that I can see exactly where he’s going to go in the next move. I mean, he has a real blood thirst for power,” Raskin said to MSNBC host Chris Hayes.