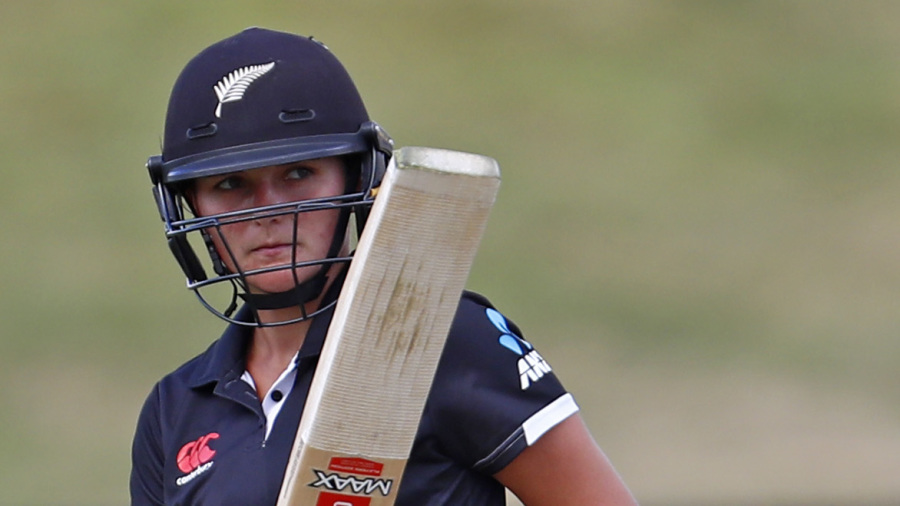 Amelia Kerr smacked an unbeaten 33-ball 68, took two impressive catches to get rid of opener Smriti Mandhana and half-centurion Richa Ghosh and then picked up three wickets in the 18th over of India’s botched 192 chase to cap off a memorable performance for New Zealand in a rain-reduced 20-overs-a-side shootout in the fourth ODI in Queenstown.

It was the first five overs of each innings that pretty much defined the match. Where New Zealand posted 42 without loss with seven fours after being sent in under cloudy skies, India managed only 24 with four fours and as many wickets lost. That by itself was an indication of the hosts’ dominance in their 63-run win, as they went 4-0 up in the five-match ODI series.

Captain Sophie Devine and her opening partner Suzie Bates set the tone with the bat for what turned out to be a non-stop assault from New Zealand’s batters. Devine made her intentions clear early enough by hitting two fours off the first three balls of the innings, and hit one more in the fourth over, taking them to 30 without loss.

In the following over, Devine cracked three fours off Meghna Singh before Bates joined in the action, in the sixth over, hitting consecutive fours off Renuka Singh.

It took a dramatic fielding effort from India to get their first opening, with Mandhana, playing her first game on the tour following her stay at the New Zealand government’s quarantine facility, diving to her left at point to snaffle a Devine cut, making even the batter wonder at the effort as she fell for 32 from 24 balls.

New Zealand had by then raced to 53 in the first six overs. Bates smashed another three consecutive fours off Pooja Vastrakar in the seventh over to ensure New Zealand didn’t lose momentum after a rapid start. And that is when the hero of the day started the carnage. Kerr deftly dabbed the first ball she faced to third man, before swinging across the line against Deepti Sharma just two balls after Rajeshwari Gayakwad dropped Bates at midwicket.

So good were New Zealand with the bat that even the second wicket took some special effort in the field – this time from wicketkeeper Ghosh, who whipped the bails off as the ball took an inside edge on to Bates’ back leg and trickled behind only to find the batter short of the crease.

Kerr, however, seemed unmoved. New Zealand’s first ten overs fetched them 89, by which time she had raced to 14 in seven deliveries, and soon clattered two more fours off Sneh Rana to keep the engine running.

It was then Amy Satterthwaite’s turn to join the party: Deepti’s first three balls of the 13th over went for 6, 6 and 4, before Meghna was also hit for consecutive fours in the 14th. Satterthwaite hammered 32 from 16 balls, as Kerr provided the finishing touches to the innings.

New Zealand piled up 46 from the last four overs, as Kerr dispatched five fours and a six on her way to her team’s second-fastest ODI fifty, which she reached off her 28th ball. They raked up 191 – three more than the highest score in a women’s T20I in New Zealand – as all of their top four scored a minimum of 32 while batting at a strike rate of at least 133, far superior than their India counterparts, who got 13, 0, 0 and 4, as only three batters entered double-figures in the chase.

India had made five changes to their line-up from the third ODI, bringing back Mandhana and opting to leave out Harmanpreet Kaur, the designated ODI vice-captain, and Jhulan Goswami. However, it was Deepti and not Mandhana who was Mithali Raj’s deputy for the match, a surprising fact considering Mandhana was vice-captain during India’s tour of Australia last year when Harmanpreet had missed the ODIs through injury. At the post-match press conference, Deepti said she had been chosen the vice-captain for the fourth and fifth ODIs.

Among the visitors’ line-up, only Ghosh seemed to be in the mood to mount a fightback, arriving at No. 6 in the fifth over and thumping her first ball for four in an attacking knock of 52 from just 29 deliveries. She cracked four fours and as many sixes on her way to India Women’s fastest ODI fifty – her 26 balls were three fewer than Rumeli Dhar’s record against Sri Lanka in 2008 – as she set about the feat with 17 of her first seven balls.

All of her fours had already been hit by then – a first-ball pull followed by a scythe over mid-off, a swing to beat mid-on and then a sweep drilled through deep square leg – as Ghosh provided India with some hope of scaling the mountain.

With 146 to get off the remaining 73 deliveries, Ghosh went the distance with her first six, a slog off Frances Mackay over midwicket. Next over, she sent Amelia sailing for another maximum in the same place. And while Raj remained quiet at the other end, Ghosh deposited Rosemary Mair for six over cover one ball after being hit on the helmet by a bouncer in the 10th over.

She hit her fourth six in the next over, but perished while trying to take on the bowling again, as Amelia took a superb catch running to her left and going low from deep midwicket.

And soon after, Raj fell to Jess Kerr, who foxed her with change of pace to leave her clean bowled, having earlier dismissed No. 3 Yastika Bhatia for a golden duck digging one short and getting a top edge to midwicket on playing the pull.

The batting collapse with the score at 19 for 4 and the final result means India now stare at a 5-0 whitewash, just days ahead of the World Cup to be played in the same country.