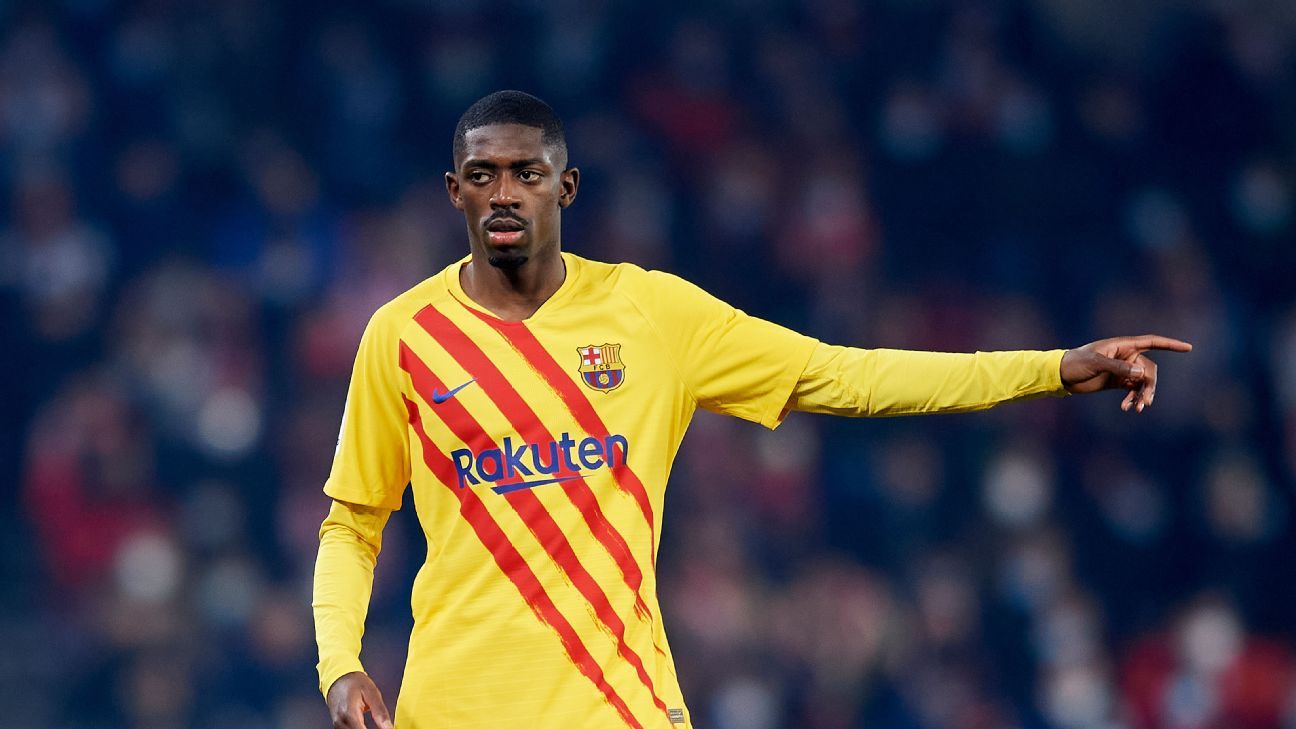 The 2022 January transfer window has reached its final day (find out when it closes here), and there’s plenty of gossip swirling about who’s moving where. Transfer Talk brings you all the latest buzz on rumours, comings and goings and, of course, done deals!

Ousmane Dembele has been part of one of the biggest transfer sagas of this January window and the Barcelona winger could be moving for around €20 million on Deadline Day.

Sky Sports report that the France international’s representatives are in talks with Paris Saint-Germain, with Foot Mercato adding that a verbal agreement had been reached between the two sides. However, AS says Barca will only sanction a move if forward Angel Di Maria is included in exchange and Le Parisien claims that PSG have now pulled out of the race altogether.

The 24-year-old winger had been linked to Chelsea, Man United and a number of other Premier League clubs, according to The Daily Mail. Dembele is out of contract in the summer and his representatives have been desperately seeking a solution for him that would enable him to leave in this window, while Barcelona want him to depart in order to free up wages to sign a new striker — namely, Alvaro Morata or Pierre-Emerick Aubameyang.

Mark Ogden gives the latest on Luis Diaz after Liverpool confirmed the signing of the winger from FC Porto.

Rogers, 19, has spent the first half of the season on loan at Bournemouth where he’s made 16 appearances, but he’s looking for more regular football before the end of the campaign.

A move to Huddersfield or Blackpool is most likely, but there are other Championships clubs also interested.

De Tomas, 27, has a €70m release clause which Arsenal are going nowhere near, but they are keen to do some kind of a deal if Aubameyang departs.

10.16 GMT: ESPN’s Barcelona correspondent Sam Marsden sums up the situation for the club on Deadline Day.

Barcelona’s Deadline Day will be dominated by two names: Ousmane Dembele and Pierre-Emerick Aubameyang. Nearly two weeks have passed since Barca told Dembele to leave the club after his agents turned down several contract renewal offers. However, with his deal up at the end of the season, he’s still not left. Barca hope the threat of leaving him in the stands for the rest of the season will force him to reconsider his future on Monday.

If Dembele does leave, Barca will free up space on their wage bill to turn to the market themselves. Arsenal striker Aubameyang, who is close to Dembele from their time at Borussia Dortmund, is a target. Coach Xavi Hernandez wants to add another striker to his squad before midnight and, after running into complications in their pursuit of Alvaro Morata, Aubameyang has jumped to the front of the queue. The signing of the Gabon international on loan until the end of the season may even be possible if Dembele stays, as long as he’s prepared to accept a low salary.

Elsewhere, Barca also want a left-back, with Ajax’s Nicolas Tagliafico an option, but the delay in finding a solution to Dembele’s future could see them run out of time when it comes to any more incomings. As for exits, goalkeeper Inaki Pena is likely to join Galatasaray on loan.

09.55 GMT: Liverpool striker Divock Origi could move before the deadline and has Burnley, Atalanta and Fiorentina on his trail, according to The Sun.

Origi, 26, has only played 10 games across all competitions this season, though he has managed to score five goals, and the Reds are ready to listen to offers.

09.41 GMT: Jesse Lingard is still looking to leave Manchester United on Monday and Newcastle have not given up hope of landing him on loan, sources have told ESPN’s Rob Dawson.

Newcastle have so far refused to agree to a £12m Premier League survival bonus demanded by United but, at the moment, lines of communication remain open. It has been complicated by Newcastle’s interest in signing Tottenham’s Dele Alli because the club would only want to sign one or the other.

Newcastle boss Eddie Howe, according to sources, has made it clear Lingard is his preferred target but a deal for Alli may be easier to do.

09.24 GMT: Arsenal need a striker and are now getting a bit desperate.

If Barcelona end up loaning Pierre-Emerick Aubameyang, then the Daily Mirror says the Gunners will turn to Juventus loanee Alvaro Morata.

Morata, 29, struggled in the Premier League with Chelsea a few years ago before moving back to Atletico Madrid and then heading out to Juve on loan.

Arsenal were heavily linked with a move for Dusan Vlahovic before he finalised a €75m deal to Juventus. The club have been told they will have to pay Alexander Isak‘s €90m release clause if they want to sign the Real Sociedad striker now, while sources have told ESPN’s James Olley that Lille’s Jonathan David is another player under consideration but the Ligue 1 club want to wait until the summer before letting him go.

Everton’s Dominic Calvert-Lewin, Napoli’s Victor Osimhen and Aston Villa’s Ollie Watkins are names that have been discussed but, again, Arsenal face an uphill task in convincing any of those three clubs to part company with a key player in the middle of the season.

United accepted offers from Everton and Crystal Palace and the Dutch midfielder has decided to join incoming manager Frank Lampard at Goodison Park. When the move is confirmed, it is likely to be a straight loan with no option to sign him permanently.

United want to bring Van de Beek and Anthony Martial back in the summer to allow their new permanent manager to assess the squad himself before making decisions on individual players.

08.58 GMT: The Daily Telegraph reports that Newcastle are making a £25m move, plus add-ons, to sign Stade Reims’ Hugo Ekitike.

Ekitike, 19, was originally valued at around £33m, but Newcastle are looking to do a cheaper deal and have reportedly had a bid accepted.

The striker has eight goals in 18 games in Ligue 1 so far this season and has also been linked with Paris Saint-Germain and West Ham.

08.50 GMT: Tottenham winger Bryan Gil is on the verge of joining Valencia on loan for the remainder of the season, according to Cope.

The Spain international will return to La Liga six months after leaving Sevilla in a €30m transfer to Tottenham.

Gil, 20, has a contract with Spurs until the end of the 2025-26 campaign, but the former Sevilla forward has played only 86 minutes of league football across nine substitute appearances.

Juventus new signing Denis Zakaria on his way for medical tests and contract signing. Deal set to be announced today for €5m plus €3m add ons to Gladbach. ⚪️⚫️ #Juventus

08.33 GMT: Brazilian club Palmeiras has turned down a €12m offer from Ajax for their young star Giovani, according to ESPN Brasil.

The 18-year-old forward has scored more than 100 goals for the Palmeiras youth teams and netted one goal in three league appearances for the first team. He has attracted the attention of several European clubs after scoring in his his team’s 4-0 win over Santos in the Copa Sao Paulo youth final earlier this month.

Palmeiras president Leila Pereira insisted this week that Giovani would only leave the club in this transfer window if his €60m release clause were to be met.

Giovani, who has represented Palmeiras since the Under-11s, is under contract with the Sao Paulo outfit until June 2026.

Carvalho, 19, is highly rated and Liverpool are willing to offer €7m for his services. Fulham want Carvalho to stay on loan until end of the season.

08.06 GMT: Christian Eriksen has signed a contract with Brentford, the club have announced, making a remarkable return to football just seven months after suffering a cardiac arrest while competing for Denmark at Euro 2020.

The midfielder had been out of contract since he left Inter Milan due to not being permitted to compete in Serie A after being fitted with an cardioverter defibrillator (ICD) device; a type of pacemaker which can prevent fatal cardiac arrests.

Eriksen has not played since he suffered the on-field cardiac arrest during his country’s opening game of Euro 2020 in June against Finland, where he received life-saving treatment on the pitch.

08.00 GMT: Barcelona are locked in talks with Arsenal over a loan deal for striker Pierre-Emerick Aubameyang, sources have told ESPN.

The 32-year-old striker is keen on joining the Camp Nou, with the two clubs discussing how much of his £250k-per-week wages the Spanish giants can pay. The deal would not include an option for a permanent move.

Sources have told ESPN that Barcelona have informed Arsenal sporting director Edu that they want Aubameyang but can only pay a small portion of the player’s salary and are awaiting a response from the north London club.

– West Ham United are in advanced talks to sign defender Duje Caleta-Car from Marseille, reports Goal’s Marc Mechenoua. The Hammers tried to sign the 25-year-old in 2020, but they’re expecting to be able to get the move over the line before the end of the transfer window. It is reported that they are prepared to part ways with a fee of €22m plus bonuses to get the deal done.

– Diego Costa has been offered to Barcelona as the LaLiga side continue to look for a striker before the window closes. After he was released by Brazilian side Atletico Mineiro, Sport writes that the Blaugrana may take a chance on the 33-year-old forward, with the club finding difficulty reaching a deal for Alvaro Morata. Costa has also been linked to the LA Galaxy, per ESPN sources.

– Barcelona goalkeeper Inaki Pena is set to complete a move to Galatasaray, according to Fabrizio Romano. The 22-year-old will join on a loan deal from Camp Nou until the end of the season, and he is hopeful of garnering first team experience in the Turkish Super Lig before returning to the Blaugrana.

– While Manchester United and Bordeaux seemingly reached an agreement over a loan deal for Phil Jones, Fabrizio Romano reveals that the 29-year-old centre-back has turned down making the switch from Old Trafford. The Ligue 1 club were keen to get a deal over the line before the transfer window closed, but it now looks as though Jones will be staying put if there isn’t a new offer elsewhere by the time the window closes.

– AC Milan have fallen short in their bid to sign Renato Sanches. Gianluca Di Marzio writes that the Serie A club had agreed on a deal with Lille in the region of €25m, but it is reported that the 24-year-old midfielder’s demands were too high for the Rossoneri to get a deal done with the window soon to close.

– Newcastle United have emerged as frontrunners to land Manchester United goalkeeper Dean Henderson, according to the Daily Mail. The 24-year-old has been looking to move on from Old Trafford with a desire to be first-choice, and it is reported that there is confidence that a deal can be reached to push through a move to St. James’ Park. Henderson is yet to make an appearance in the Premier League for the Red Devils this season.