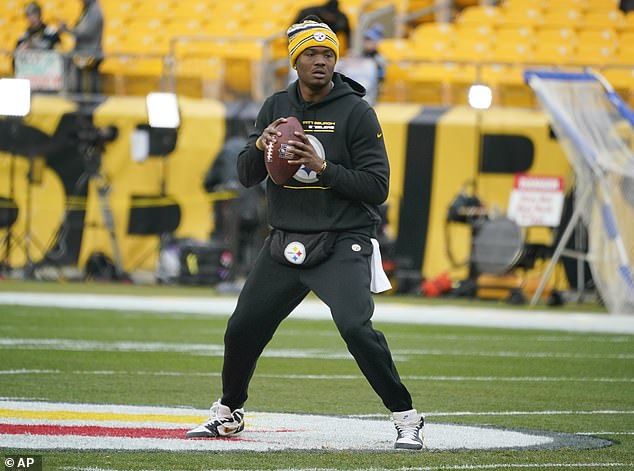 Pittsburgh Steelers quarterback and former Ohio State standout Dwayne Haskins made a chilling social media post sharing how he was ‘at peace’ just hours before he was struck and killed by a dump truck along a South Florida highway.

‘”It is what it is” will keep you at peace,’ the NFL player posted to his Instagram stories Friday afternoon after he revealed to his followers that he was hanging out with his teammate, running back Najee Harris.

Haskins, 24, was hit by the truck on Interstate 595 in Fort Lauderdale early Saturday morning as he attempted to cross multiple lanes of westbound traffic, state troopers confirmed to DailyMail.com.

He was pronounced dead at the scene shortly after 6:30 a.m.

Police said it remains unclear why the NFL player was walking along the highway.

Traffic Homicide Investigators have launched a probe into the crash, noting that no further details will be provided at this time.

Before Friday’s now-seemingly chilling Instagram story, Haskins last posted on his feed on March 30 from St. Thomas. He had been attending the Legends of Pittsburgh Cruise in which fans could interact with some of their favorite current and former Steelers players.

Police say Haskins was attempting to cross Interstate 595 in Fort Lauderdale around 6.30am Saturday when the truck struck him. He was pronounced dead at the scene. It remains unclear why the NFL player was walking along on the highway

Traffic Homicide Investigators have launched a probe into the crash

‘”It is what it is” will keep you at peace,’ the NFL player posted to his Instagram stories Friday afternoon

Haskins, who was set to turn 25 next month, was training with his team in South Florida when the fatal accident occurred early Saturday morning, his agent, Cedric Saunders, confirmed to ESPN‘s Adam Schefter.

‘I am devastated and at a loss for words with the unfortunate passing of Dwayne Haskins,’ Tomlin said in a statement confirming his death.

‘He quickly became part of our Steelers family upon his arrival in Pittsburgh and was one of our hardest workers, both on the field and in our community.’

‘Our thoughts and prayers are with his wife, Kalabrya, and his entire family during this difficult time.’

Haskins last posted on his Instagram feed on March 30 from St. Thomas. He had been attending the Legends of Pittsburgh Cruise in which fans could interact with some of their favorite current and former Steelers players.

Haskins was drafted to the NFL by the Washington Commanders in 2019 as the 15th overall pick after he had a fantastic season with the Buckeyes.

Although he was only started at Ohio State for one season, Haskins quickly became one of the best players in college football.

During his lone season as a starter, he threw for 4,831 yards and 50 touchdown passes. He had 54 career touchdowns.

Ohio State posted a photo of Haskins on its Twitter feed Saturday. It read: ‘Leader. Legend. Forever a Buckeye.’

Haskins is pictured with his wife, Kalabrya Haskins, at Disney World in June 2021

Haskins, 24, was drafted to the NFL by the Washington Commanders in 2019. He is pictured at a game against Detroit in November 2019

During his lone season as an Ohio State starter, he threw for 4,831 yards and 50 touchdown passes. He had 54 career touchdowns. He is pictured during an OSU-Penn State match in September 2018

Haskins struggled over his first two years in the league and was cut by Washington in December 2020.

He threw seven touchdowns and seven interceptions during his rookie season and, in his second season, threw for five touchdowns before the team released him.

In addition to losing his starting job, Haskins was also fined $40,000 in 2020 for violating the NFL’s COVID-19 protocols after he was seen in public partying without a mask.

‘We are devastated to hear the news of the tragic passing of Dwayne Haskins, Jr. He was a young man with a tremendous amount of potential who had an infectious personality,’ Commanders owners Dan and Tanya Snyder said in a statement Saturday.

‘To say we are heartbroken is an understatement. Our hearts and prayers are with the members of Dwayne’s family and all of those who knew him and loved him.’

Haskins signed with the Steelers in January 2021 and was expected to compete to be a starter this year in wake of Ben Roethlisberger’s retirement. Haskins is pictured during a match against the North Carolina Panthers in August 2021

The Steelers gave Haskins a chance to resurrect his career in January 2021 when they signed him a month after being released by Washington.

Seemingly humbled by the offer, Haskins stressed that he was eager to work hard and absorb as much as he could from quarterbacks Ben Roethlisberger and Mason Rudolph.

He made the roster as the third-stringer but only dressed once, serving as the backup in a tie with Detroit after Roethlisberger was placed into the COVID-19 protocol the night before the game.

‘The world lost a great person today,’ Steelers star T.J. Watt posted on Twitter. ‘When Dwayne first walked into the locker room I could tell he was an upbeat guy. He was always making people smile, never taking life for granted.’

Tomlin and general manager Kevin Colbert had both praised Haskins for his improvement since joining the team, and the Steelers re-signed him to a one-year deal as a restricted free agent in March.

‘We’re excited to see what Dwayne can provide, either from competition, or maybe he evolves as a starter,’ Colbert said in January.

Haskins was expected to compete with Rudolph and Mitch Trubisky for a starting spot in wake of Roethlisberger’s retirement.

Reports indicate he had been working in South Florida this week with several teammates, including Trubisky and other skill position players, including running back Najee Harris and tight end Pat Freiermuth.

News of Haskins’ death left many heartbroken, including fellow professional athletes, industry members and former Buckeyes, as evidenced by the flood of social media tributes dedicated to the player.

‘Heartbreaking. RIP Dwayne Haskins! Sending blessings and prayers to his family! Life is precious. We’re always reminded,’ Chicago Cubs pitcher Marcus Stroman tweeted. ‘Incredibly sad to see young kings and queens, with their entire life ahead of them, gone too soon. Love your people and find your happiness daily!’

‘This is difficult. As an Ohio State alum I loved what Dwayne Haskins did for the school,’ wrote ESPN NFL Nation reporter John Keim. ‘As a reporter getting to know him and talk to him many times and getting to know those close to him it’s really tough, knowing the devastating impact on their lives. So young. So damn sad.’

‘Dwayne Haskins was always pure class every time the OSU media spoke with him. Great young man,’ wrote radio show host and Bucknuts editor Dave Biddle. ‘#RIP to one of the best young men and QBs in Ohio State history. So damn sad.’

‘Beyond saddened by the loss of Dwayne Haskins. This boy made his dreams come true by playing at Ohio State. Gone too soon,’ wrote attorney and Ohio State alum Isaac Caverly. ‘At a loss for words. One of my favorite players to watch, God please look after his family.’

‘There is no way this is real. I can’t even believe this. I just woke up to some of the worst, most shocking news in my whole entire life. I am speechless. I am heartbroken. I don’t even know what to say. I love Dwayne Haskins. Absolute gem of a human,’ wrote Sam Block.