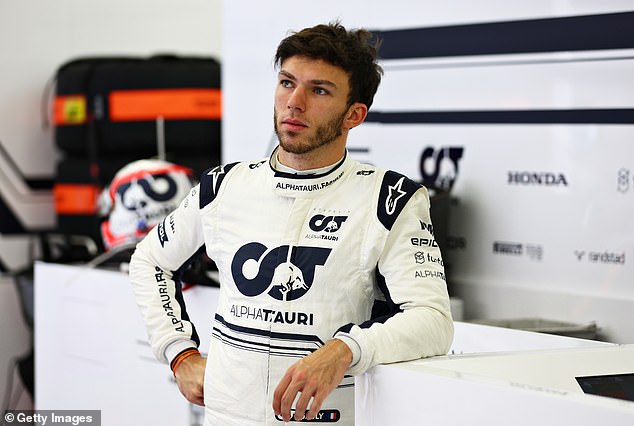 By Kieran Jackson For Mailonline

Pierre Gasly was a surprise name at the top of the leaderboard after day one of F1 pre-season testing on a day dominated by Mercedes’ radically designed 2022 car.

Just 10 days before the first race in Sakhir, Lewis Hamilton‘s Mercedes team unveiled a radically revised machine on the opening day of the final test.

The focus is on Mercedes’ virtually non-existent sidepods, designed to provide greater airflow, improving downforce, and effectively making the car go faster. Mercedes’ innovative design comes after the biggest technical overhaul of the sport’s rulebook in a generation.

Meanwhile, AlphaTauri driver Gasly set the fastest lap late in the day under the lights, with Ferrari’s Carlos Sainz second and his team-mate Charles Leclerc third.

Hamilton, meanwhile, only finished 11th out of 15 drivers, but did complete only 62 laps – Gasly, on the other hand, completed 102.

Yet all the talk was about the Mercedes car in Bahrain, with Red Bull team principal Christian Horner questioning whether his rivals have bent the rules.

In an interview with German publication Auto Motor und Sport, Horner said: “From our point of view, Mercedes went a step too far. That doesn’t correspond to the spirit of the regulations. For us, these wings are illegal.”

Red Bull then made a statement saying: ‘Christian Horner has not given any interviews regarding Mercedes’ car. Any quotes being attributed to him this morning are incorrect.’

The car was approved by the FIA and inspectors were informed of the data and details weeks ago. The final test concludes on Saturday.