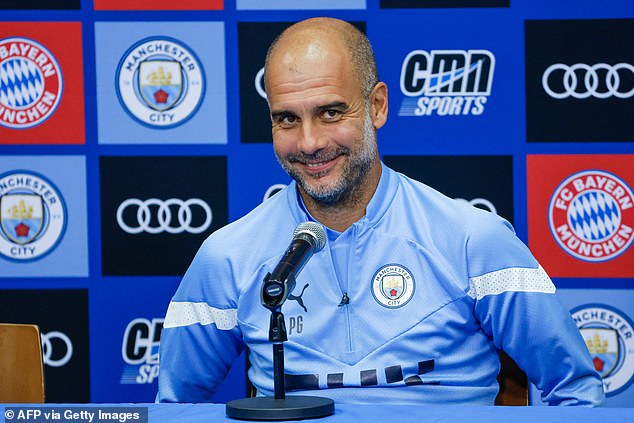 Pep Guardiola admits he was ‘incredibly happy’ with Gabriel Jesus, Raheem Sterling and Oleksandr Zinchenko and would have been keen to keep them at Manchester City this summer – but concedes it was impossible to when players ‘want more’

By Ash Rose For Mailonline

Manchester City manager Pep Guardiola has admitted that he was happy for all three of Gabriel Jesus, Raheem Sterling and Oleksandr Zinchenko to stay at the club.

However, he believes that their desire to want more was the reason the trio left the club to join Arsenal and Chelsea respectively this summer.

It has been a busy summer window at The Etihad Stadium, with the key departures of three of their Premier League title-winning squad.

Guardiola says he would have been happy to see Sterling, Jesus and Zinchenko stay at City

Gabriel Jesus was the first out of the door, securing a £45million switch to Arsenal, where the Brazilian forward has already hit two goals during the Gunners’ pre-season tour.

Next to follow was Raheem Sterling’s switch to Stamford Bridge, which signalled the beginning of the Ted Boehly era at Chelsea. The 27-year-old moved to West London in a £55million.

Completing the trio, Oleksandr Zinchenko joined Jesus at The Emirates last week with a £32million move to link-up with Mikel Arteta’s side.

All three of the players weren’t guaranteed starters under Guardiola last season, however, the Spanish boss says he would have been happy if they had remained at the club.

‘No [the outgoings weren’t guaranteed] because I was incredibly happy with Gabriel, Oleks and Raheem,” Guardiola said.

‘If they stayed longer there would be no problem. They proved last year how good they are.

‘But sometimes the players want more, and the club feel it is the right moment to do it. But the most important thing is they leave happy with the club and what they have done.

‘Normally when you talk about transfers in Spain, Germany, England it is 10 per cent more. It happens and we know it. It happens because they are really good. They are the best ages and their best years are maybe coming now. That’s why they have a value in the market.

‘Chelsea and Arsenal have paid the money that is fair. And the discussions were perfect, Txiki [Begiristain] told me. Good for both sides and really friendly.’

Guardiola added that he was sad to see the trio leave because the players were incredibly loved and that he had great chemistry with each of the stars since he arrived in Manchester.

‘This summer we have bought some exceptional people. And the rest we know each other. And we are sad because Raheem, Gabriel and Oleks were incredibly beloved. Since I arrived in Manchester, the chemistry has been incredible. It makes things good for me’

City’s new-look side includes £51million signing Erling Haaland, who scored his first goal for his new club during their 1-0 pre-season win over Bayern Munich on Saturday.

The club have also recruited England star Kalvin Phillips and are closing in on the signing of Brighton full-back Marc Cucurella, if they two clubs are able to agree a fee for the Spaniard.