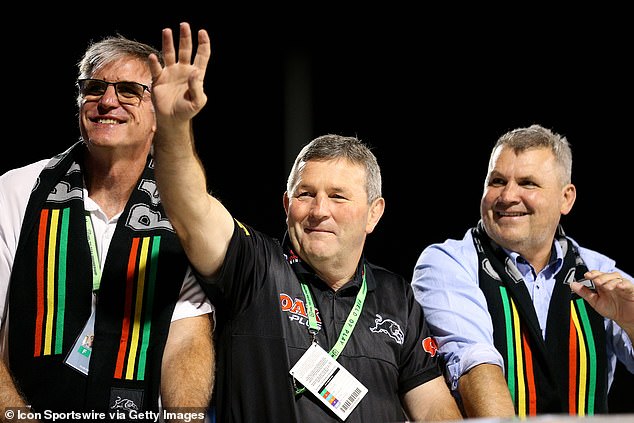 ‘How long until I can’t remember my own children?’ Penrith legend Royce Simmons reveals the heart-breaking answer his doctor gave him just after he was diagnosed with Alzheimer’s disease

Penrith Panthers icon Royce Simmons is well known for staring down the toughest challenges on the field and winning. Now, he faces the toughest battle of his life – off the footy field.

The grand final winner has been diagnosed with Alzheimer’s disease, a progressive condition that destroys memory and other cognitive functions. Simmons is just 61.

When Sydney neurologist Dr Craig Presgrave held up the scan of his brain and delivered the life-changing news, Simmons had just one question.

‘How long until I can’t remember who my kids are?’ Simmons asked.

And the answer? ‘How long is a piece of string,’ the doctor said.

Simmons celebrates the anniversary of Penrith’s 1991 premiership win with teammates in 2021. Simmons scored the match-winning try against Canberra

Simmons spoke to The Saturday Telegraph about his new diagnosis. For now, he is mostly lucid and able to remember and communicate without too many issues.

However, there were worrying signs that led to him seeking the diagnosis.

One notable incident was when he and his wife Liane went away and he suggested they buy beer and wine on the way. When they arrived, he had no recollection of making that request or their stop at the bottle shop.

Now his primary concern is how the disease will impact the lives of his wife and children.

‘I know it’s coming, but I don’t know if I’m going to know when it comes.

‘The things that come to my mind have been, that it’s going to wreck my wife’s life because she’s going to be looking after me all the time.

‘So it could wreck 20 years of her life. She won’t see it that way, but that’s how I see it. It’s also going to interfere with my children’s lives. It just devastates families.’

Simmons played 238 NRL games for the Panthers and also played 10 matches for both New South Wales and Australia during his 11-year career.

He starred at hooker during an era where the role involved actively getting stuck in to scrums and Simmons admitted he took his fair share of head knocks over the years.

He refuses to blame concussions for his current condition, but also applauded modern efforts to reduce head knocks in the NRL.

‘I won’t cop that concussions caused this one bit,’ Simmons said.

‘I asked the specialist, why are so many women being diagnosed with this? It’s the biggest killer of women in Australia and if you want to bring it back to rugby league, women only started playing the game at the current level 10 years ago.

‘I certainly had my fair share of concussions. You played on back then.

‘It’s all changed now and it’s for the better. You can never go too far to prevent any sort of injury.

Simmons hopes to raise funds for dementia research by using his diagnosis of dementia to bring the disease into the public consciousness.

That’s why he and his wife Liane created Royce’s Big Walk, a fundraising event organised in conjunction with the Penrith Panthers, Dementia Australia, and other partners.

‘I want to help raise money for research as a mark of respect for the medical people who have worked so hard find a cure or a successful treatment and all those people who suffer watching a loved one go down the path of losing who they once were,’ he said.

‘Hopefully a young doctor over the next 10 years can make a breakthrough … imagine the relief on so many families.’