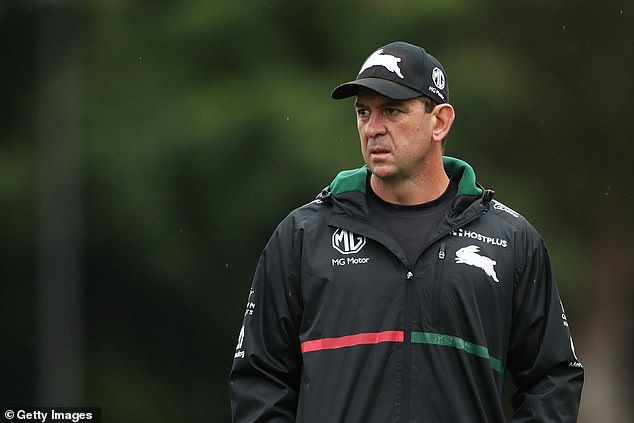 The sliding doors moment that almost saw Souths’ Jason Demetriou take the reins at Brisbane…. as new Bunnies boss insists revenge is NOT on his mind ahead of clash with club that got rid of him

Jason Demetriou insists that revenge will not be on his mind when he makes his NRL coaching debut against the club that snubbed him over three years ago.

Demetriou, 46, was on the cusp of taking over from Wayne Bennett at the Broncos in 2018, having served as a trusted lieutenant under the supercoach.

The former centre was part of a four-man shortlist to replace Bennett, rivalling  Anthony Seibold, Kevin Walters and Michael Maguire for the post.

Despite having strong support from members of the Broncos hierarchy after an ‘outstanding’ interview, Demetriou was snubbed and Seibold got the nod.

Seibold put pen to paper on a five-year deal worth $3million while Demetriou left the club, following Bennett – who had recommended the 46-year-old to take over – to South Sydney.

Seibold famously crashed and burned at Red Hill, getting the chop in August 2020 after the side failed dismally under his leadership.

Now, JD returns to Suncorp Stadium as head coach at the Rabbitohs, in a glorious opportunity to make the Broncos rue their decision to overlook him in that sliding doors moment.

Yet Demetriou is adamant that he was not ready for the Broncos job and says his focus will be on winning two points on Friday night.

‘To be honest, I never truly considered myself in the mix for the Broncos job,’ he said via The Herald Sun.

‘It was a good process to go through and get some interview experience, but I never thought I would get the job.

‘It’s a question for other people.’

Seibold was subsequently sacked in 2020 and replaced by Walters. Brisbane chairman Karl Morris says he has no regrets about that decision, insisting that he is pleased to see Demetriou offered a chance by South Sydney.

‘I was really impressed with Jason at the Broncos and I am really pleased he has been able to find himself a head coaching role in the NRL,’ Morris said.

‘He was certainly one of several candidates we looked at to replace Wayne.

‘I was always very impressed with Jason’s temperament, so I’m not surprised he has gone on to become a head coach at South Sydney.

‘I wish Jason all the best.’