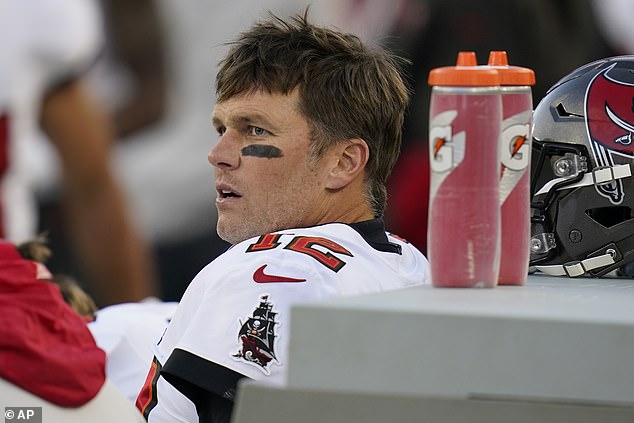 BREAKING: NFL legend and seven-time Super Bowl winner Tom Brady, 44, officially retires: ‘It is time to focus my time and energy on other things that require my attention’

After days of denials, Tom Brady is finally ready to retire from football.

‘I have always believed the sport of football is an ‘all-in’ proposition – if a 100% competitive commitment isn’t there, you won’t succeed, and success is what I love so much about our game,’ Brady wrote.

‘There is a physical, mental, and emotional challenge EVERY single day that has allowed me to maximize my highest potential. And I have tried my very best these past 22 years. There are no shortcuts to success on the field or in life.

‘This is difficult for me to write, but here it goes: I am not going to make that competitive commitment anymore. I have loved my NFL career, and now it is time to focus my time and energy on other things that require my attention.’

Brady signed a one-year, $25 million contract extensions guiding the Tampa Bay Buccaneers to a Super Bowl win last year. That deal included a $20 million signing bonus, $15 million of which would have been paid to him on Friday. So by retiring, Brady likely saved the Bucs $15 million, although they can choose to pay out his full signing bonus.

After days of denials, Tom Brady is finally ready to retire from football. The seven-time Super Bowl champion announced his decision on Instagram , Tuesday

TB12sports quickly deleted its tweet, but ESPN and NFL Network continued reporting that Brady has played his last game.

‘We’re in such an era of information and people want to be in front of the news often, and I totally understand that and understand that’s the environment we’re in,’ Brady said. ‘But I think for me, it’s literally day to day with me. I’m trying to do the best I can every day and evaluate things as they come, and I’m trying to make a great decision for me and my family.’

Brady said he was disappointed that coverage of his possible retirement overshadowed the NFL’s conference championship games over the weekend.

‘I’ll know when the time’s right,’ he said. ‘When I know, I’ll know and when I don’t know, I don’t know, and I’m not going to race to some conclusion about that.’

Brady walks away as the NFL’s career leader in numerous passing categories and most prolific winner. He’d also be going out at the top of his game.

Brady led the NFL in yards passing (5,316), touchdowns (43), completions (485) and attempts (719), but the Buccaneers lost at home to the NFC champion Rams last Sunday in the divisional round after rallying from a 27-3 deficit to tie it in the final minute.

Brady won six Super Bowls with the Patriots playing for coach Bill Belichick, and got better with age. He led the Buccaneers to their second Super Bowl title last year in his first season in Tampa.