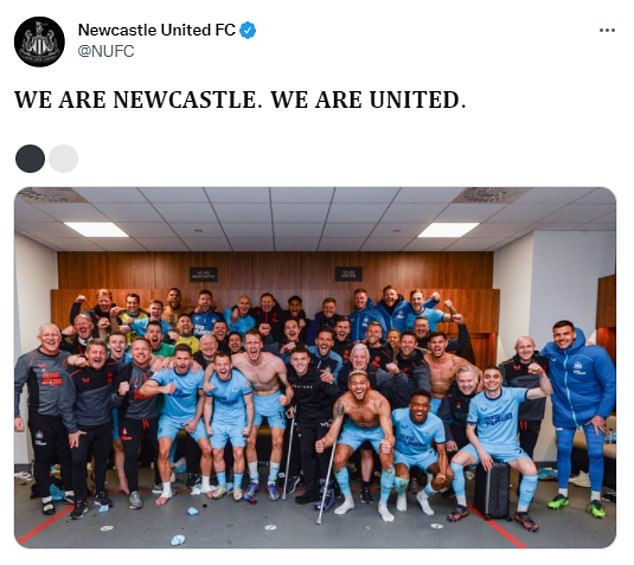 ‘Always supporting the boys! I hope that’s allowed…’: Kieran Trippier aims cheeky dig at Gabby Agbonlahor after ex-Villa striker claimed he was ‘silly’ for travelling with Newcastle squad to matches when he’s injured

Kieran Trippier has fired back at Gabby Agbonlahor after the former Aston Villa striker recently criticised him for travelling with the Newcastle squad to away games while he is out injured.

The England full-back broke his foot in Newcastle’s 1-0 win against Aston Villa last month, but was pictured in the team’s dressing room 13 days later after Eddie Howe‘s side cruised to a 2-0 victory at Brentford.

After seeing the image, Agbonlahor questioned Trippier’s decision to stay with the team, despite being unavailable to play.

‘People will see that as amazing because he’s supporting the team but I see it as silly,’ he told Football Insider.

‘You’ve got an injury, you’re on crutches, you should be at home with your feet up to rest the injury not struggling around on such a long trip to Brentford. I don’t see the point in that.’

On Thursday night, Newcastle took another step closer to survival as they came from behind to beat Southampton 2-1 at St Mary’s.

Goals from January signings Chris Wood and Bruno Guimaraes secured all three points, and led to another team photo in the dressing room after the final whistle.

Trippier was not in attendance this time, but he could not resist the temptation to poke fun at Agbonlahor as he tweeted an alternative version of the image on Friday morning, having photoshopped himself into the picture holding a Newcastle scarf.

Following that result, Trippier decided to aim a dig at Agbonlahor after his recent comments

The caption to accompany the tweet read: ‘Always supporting the boys! I hope that’s allowed…’

The 31-year-old will be hoping that he can rejoin his teammates on the pitch in the near future after making a promising start to his Newcastle career prior to his injury setback.

He scored in back-to-back games against Everton and Villa in February, but Howe has previously admitted that there is no guarantee that Trippier will return to action this season.

Newcastle have coped well without him, though, and are currently on a nine-match unbeaten run in the league which has seen them move 10 points clear of the bottom three.