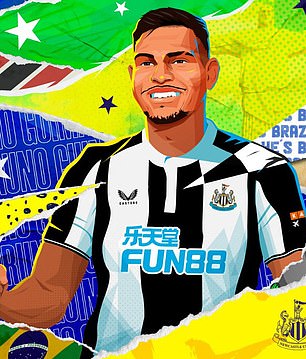 By Olly Allen For Mailonline

Newcastle have confirmed the signing of Brazilian midfielder Bruno Guimaraes from Lyon.

The Magpies are believed to have paid £33million for the 24-year-old, with a further £6.7million in add-ons. He has signed a contract at St. James’ Park until 2026.

‘Bruno is a hugely exciting talent and has been one of our primary targets so I’m delighted to secure him,’ Howe told Newcastle’s official website. ‘He strengthens the group immediately ready for the challenge ahead.

‘He has been one of the standout performers in France and is a full international for Brazil so I have no doubt our supporters will really enjoy watching him. We look forward to welcoming him to the club on his return from international duty.’

Guimaraes will wear the number 39 shirt at St. James’ Park – the number of the taxi that his father used to drive in Brazil.

Newcastle’s January business is unlikely to be done, despite Monday’s transfer deadline looming.

Their latest £10million bid for Brighton defender Dan Burn rejected on Saturday, while they have also asked about Liverpool defender Nat Phillips.

Guimaraes, who has signed a contract at St. James’ Park until 2026, will wear number 39