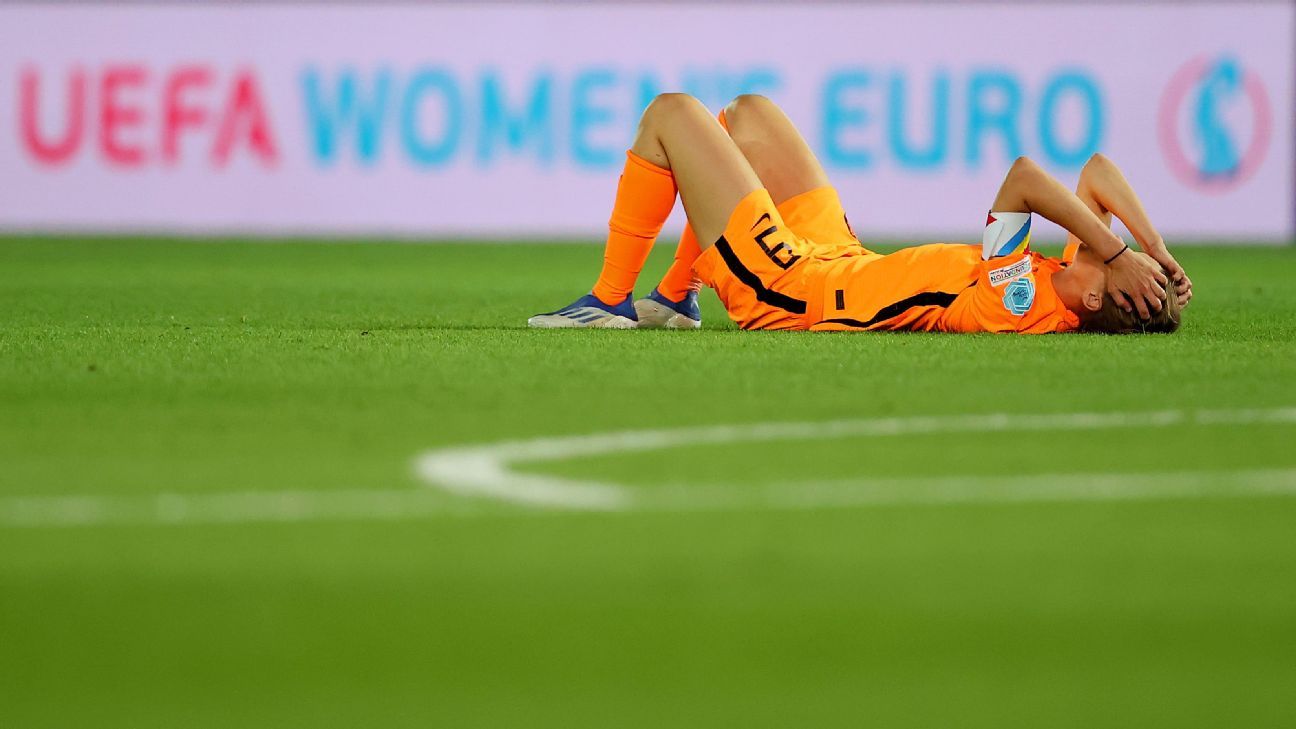 ROTHERHAM, England — Ahead of the start of Euro 2022 this summer, Dutch midfielder Jill Roord had made headlines at home when she called new manager Mark Parsons, in a word, boring.

Team meetings lasted too long and were unnecessary, she said, failing to hold the players’ interest. Although she later recanted her statements as a misunderstanding over a joke, there was an agreement amongst pundits that the last thing players want is team meetings that go on and on. The implication was that Parsons wasn’t just letting the football flow and was too focused on talking long after the players had lost interest.

For much of Saturday’s 1-0 loss to France in the Euro 2022 quarterfinal, it felt as if Parsons must’ve left all his tactics for the match last in his briefings to players, trying to impart information long after his players had zoned out.

In a loss that saw the Netherlands finish with a paltry 0.51 expected goals and nine shots — compared to France’s 4.33 xG and 33 shots — the team in day-glow orange was ironically all but invisible, lacking the harmony France boasted in spades.

At the Tokyo Olympics last year, before Parsons took over, the Netherlands had been perhaps a little too exciting to watch — all attack and kamikaze defending, the lack of balance enough to keep any viewer in a state of stressed attention. Under Parsons, who took charge shortly after the Olympics, it had been hard to get a handle on the squad, viewers and pundits left with a sense of under-performance after their matches. The coach had attempted to bring through youth players — an area deeply neglected by predecessor, Sarina Wiegman — and tidy up the sloppy defence.

In Rotherham — and during all the Netherlands’ matches under their new coach — it has become clear that his grandest ideas have yet to take root. The Dutch looked unconvincing during the Euro 2022 group stage, drawing Sweden and barely edging past a Portugal side that failed to even qualify for the tournament until Russia was suspended. As the Dutch side looked unconvincing again on Saturday as France battered them with shots, Parsons’ players looked to be left confused and visibly below their best on the pitch.

Asked about being led by a new manager after Saturday’s loss, Roord said the Dutch team is on the right track with Parsons — but not there just yet.

“It takes time sometimes but I think we’re on the right way,” she said. “I think also we missed some luck this tournament — we have injuries, we have COVID … I think we showed some really good games and good moments, but in the end we weren’t good enough. But it’s something that hopefully we’ll comeback soon.”

Coming into the tie, France could take comfort in the familiar, playing their fourth successive game in Rotherham — if they had gotten to five at the New York Stadium, the town might have to have been renamed Rotherjambon. It was the site of their sublime 5-1 win over Italy to open the group stage, as well as their less than comfortable 2-1 win over Belgium and of course, their late draw against Iceland.

From match to match — or even half to half — France had progressively looked a little weaker. There was the argument that they had gone too hard too soon against Italy, getting everyone’s hopes up and the mounting pressure was beginning to tell.

Talented but unlucky or, talented but mentally fragile — maybe both or neither — everyone knew of France’s quarterfinal curse but once Les Bleues began to move the ball around against the Dutch, it seemed that there would only be one outcome. The French side that had topped their group were able to move the ball with a decadent precision as the Netherlands looked at times to be holding on for dear life.

From Dutch defender Dominique Janssen botching her clearance to force an early save from the tournament’s breakout goalkeeper, Daphne van Domselaar, to French forward Delphine Cascarino‘s low drive off of the post, all the action was happening in the Dutch box. Stefanie van der Gragt‘s clearance off the line from Melvine Malard‘s point blank shot was followed by another chance from the French side with Grace Geyoro firing the ball at the torso of the Dutch defender as France juiced their xG to 1.87 for the first half alone. The Netherlands’ first-half xG was just 0.03.

Maybe it was a double dose of coffee at the break for the Dutch, or maybe Parsons found the right words in the short break between halves, but whatever it was, the team in the near-glowing orange kits came out with a spring in their step, finally having woken up.

Where the attack and midfield had been carried — single-handedly at times — by Daniëlle van de Donk in the first half, the Dutch No. 10 finally found some help both going forward. With the midfield springing to life, the defence wasn’t as overworked and, as such, France weren’t able to create with as much ease. Wendie Renard’s clean header at a corner after the hour was the first notable chance for Les Bleues after the break.

Despite the improvements, the Netherlands still looked flat and unsure of themselves going forward, too much like a piece of homework handed back by a frustrated teacher, highlighter marking everything wrong. Even with Vivianne Miedema back in the squad following a spell out with COVID-19, the inspirational figure could not find her best football, and indeed, the attack was aimless.

On paper, France vs. the Netherlands had been the hardest to call, to put a marker down and say which team would win. It followed on from three other quarterfinals that been far closer than most expected, with England vs. Spain forced to extra time, Germany vs. Austria only wrapped up at the death and Sweden needing all 92-plus minutes to find a winner against Belgium.

The stadium in Rotherham on Saturday held its breath as Selma Bacha went on a mazy run in the 87th minute, her cross well met by Geyoro, but the hat-trick hero from the first game could only head wide when she seemed certain to score. A corner deep into stoppage time drew memories of the previous night, with France poised to pull a Sweden and snatch the win at the death. Indeed, Renard was well-placed to rise to meet the ball, drawing a first-rate save from Van Domselaar, her 10th save of the game. The shot was the last meaningful action of the second half and Renard’s 15th shot (and 13th header) of the tournament.

As the match dragged on looking destined for penalty shootout to break the deadlock, the ball shifted from one area of the pitch to the other without much consequence until VAR intervened and awarded France a penalty. Eve Périsset stepped up to the spot and clinically swept inside the right-hand post, finally zapping the last of the remaining fight out of a Dutch team who could still not offer much going forward. Van Domselaar, the goalkeeper, had been best player for the Dutch side on the night — and probably the best player on the pitch, period — but the penalty proved too much.

The match was decided then and there, France finally breaking their curse to reach the last four of a major tournament for the first time since the 2012 Olympics. Yet for all their guile and skill, France hadn’t scored in the second half of any of their four Euro matches so far this summer. France remains a team still with questions to answer and not just ahead of their semifinal against Germany.

For the Dutch side, though, the future is even less clear — knocked out of the 2022 Euro after winning the previous edition, they will be watching the semifinal round from home.