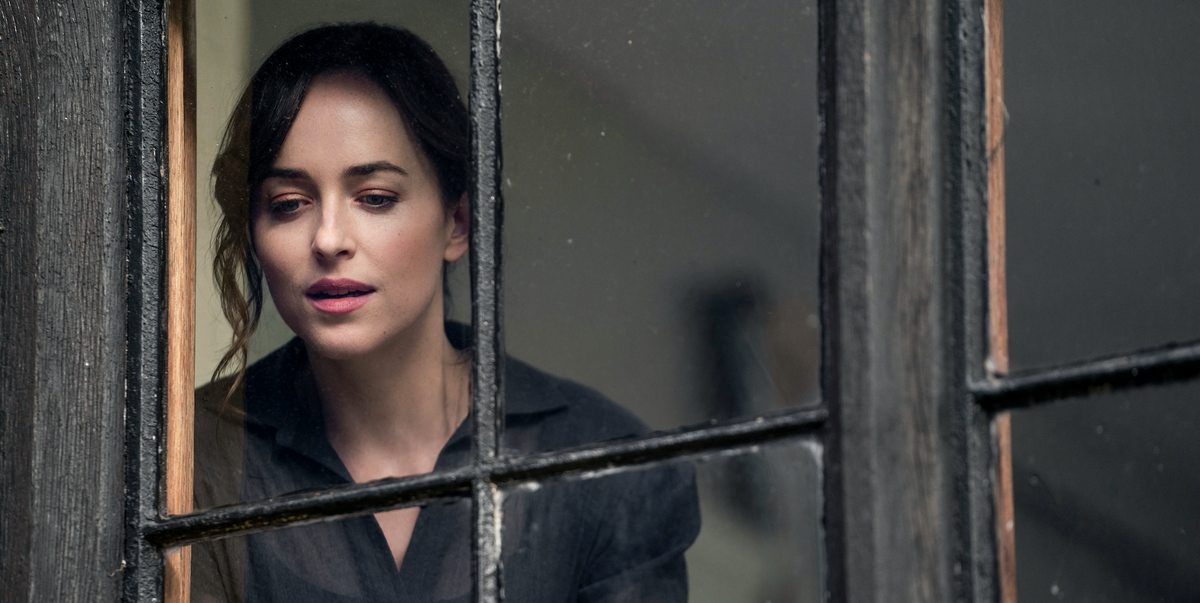 If I had based my feelings about Netflix’s Persuasion purely on Twitter discourse and reviews, I’d think it was going to be way, way more glib and way… worse. The new adaptation of Jane Austen’s most mature and melancholy novel, starring Dakota Johnson, Cosmo Jarvis, and Henry Golding, has been torn apart by critics and Twitter threads alike for its use of things like modern language, curtain bangs, and Fleabag-esque fourth wall breaks. It has been called everything from cringe to a disaster. One official account said it killed Austen a second time. Relax! I… liked Persuasion. If you don’t mind terribly, I’m going to ignore the Austen stans clutching their pearls and wallow along with this sad little film.

Maybe the biggest critique of the movie is that Johnson as Anne doesn’t look or talk like an Austen-era heroine. Sure, Johnson’s Anne looks a bit like a time traveler who has been resigned to her fate, but Keira Knightley’s bangs were flopping around in the 2005 Pride and Prejudice, too. Log on to Twitter and you’ll see screenshots of lines like “we’re worse than exes, we’re friends” and “now I’m single and thriving,” but within the actual context of the film they don’t sound quirky. They sound desperate, like someone trying to mask their sadness with an ironically basic Instagram caption. I don’t know the source material as well as I do other Austen books, but the film was still melancholy to me, which is the whole point.

I also don’t 100 percent agree that this movie is the “Fleabagification of Jane Austen,” but did those saying so forget that Fleabag is a depressing show? When Johnson’s Anne frowns as she observes other young women shamelessly, and successfully, dumbing themselves down to flirt with men, she looks not snarky or superior but defeated. I really felt that! Have you been on a dating app recently? It’s bleak out here! Let me be deeply sad and indulge in the fantasy that I look as beautiful as Johnson while doing so, please.

Persuasion‘s supporting cast and characters are also worth the price of admission. Jarvis’s Captain Wentworth, Anne’s once and future love, has a pout so broad you could stand under it in the rain. Golding plays Mr. Elliott, Anne’s cousin (don’t get me started) and probably the most familiar “type” recognizable to the casual Austen fan, the smooth-talking f*ckboy. Other characters are a bit more unique to this story. Lady Russell, played by Nikki Amuka-Bird, is a mentor—albeit the one who did the titular persuading—who genuinely cares about Anne and not just her social standing. Mia McKenna-Bruce’s performance as Anne’s melodramatic sister Mary is a hilarious standout. And Louisa (Nia Towle) is as boy-crazy as some of Austen’s other “little sister” types, but as considerate as Mary is self-absorbed. It’s really fun to spend time with these characters. Did you hear that? I said it was fun!

And not only that, there are some really strong scenes in this movie. There’s a nice moment towards the end where Captain Harville (Edward Bluemel) remarks to Anne that he feels conflicted about his late sister’s widow finding a new wife because it felt like his suffering kept his sister’s memory alive. It’s a complex moment that speaks to the story’s themes of moving on, getting a second chance at love, and allowing oneself to be sad. It stuck with me. If people didn’t write this movie off because of a few jokes, they might enjoy scenes like this one.

Like any Austen heroine, Persuasion has its faults—mostly, IMO, in that it’s a bit wishy-washy. It’s not a fully modern adaptation like Clueless and Fire Island, nor does it fully commit to anachronistic language like other period pieces of late, including The Great and Dickinson. The winks to the audience slip in and out, sometimes fading completely into the background. Director Carrie Cracknell is primarily a theatre director, and I wonder if this was a stage adaptation with the benefit of previews and live feedback, the tone might have picked a side. However, like one modern-day Austen romantic lead, I like Persuasion very much just as it is.

I do understand the complaint that it seems like the movie is trying to be a cool English teacher stereotype by trying to make Anne seem “relatable”—but everything that I personally related to about Anne came from the story and Johnson’s performance, not the updated text. One thing that I like about Anne, as far as the romance is concerned, is that she knows who she’s in love with from the beginning. Fanny in Mansfield Park is also like this, but Emma Woodhouse and Elizabeth Bennet (the two characters most adapted to the screen) are dramatically unaware of their own feelings. I don’t find that particularly relatable. But would it be annoying if “reaching the kids” was the reason behind the artistic choice? Eh, maybe, but not so much that it shouldn’t exist.

The vitriol against this movie is truly getting old, because despite the critiques, it has merit. This is a period piece for those of us who don’t wait until pumpkin spice is on the menu to listen to folklore (an important demographic). It’s for driving through the suburbs and crying. It’s for those who are prone to self-sabotage, and lie awake spiraling about all the different ways things could have gone with a crush (another important demographic). This is a period piece for people who heard the word “cheugy” and shuddered a little bit because they were like: that might be me.

Books do not go to bed at night dreaming about becoming films when they grow up. They’re already grown. If you’re an Austen purist and can’t get past *waves hand* all of this, then by all means, feel free to skip this one. Find yourself another adaptation. Re-read the book. I totally get it. I respect you! There are puh-lenty of things that I’m an annoying stickler about. But any adaptation, especially one from the public domain, should feel free to make big choices and controversial interpretations and not be a carbon copy of the book and not be for everybody’s liking. Where on Earth did all these Austen girlies learn to be so freakin’ judgmental?! If there was a fourth wall right now, I’d break it, too, and give you an epic knowing glance.