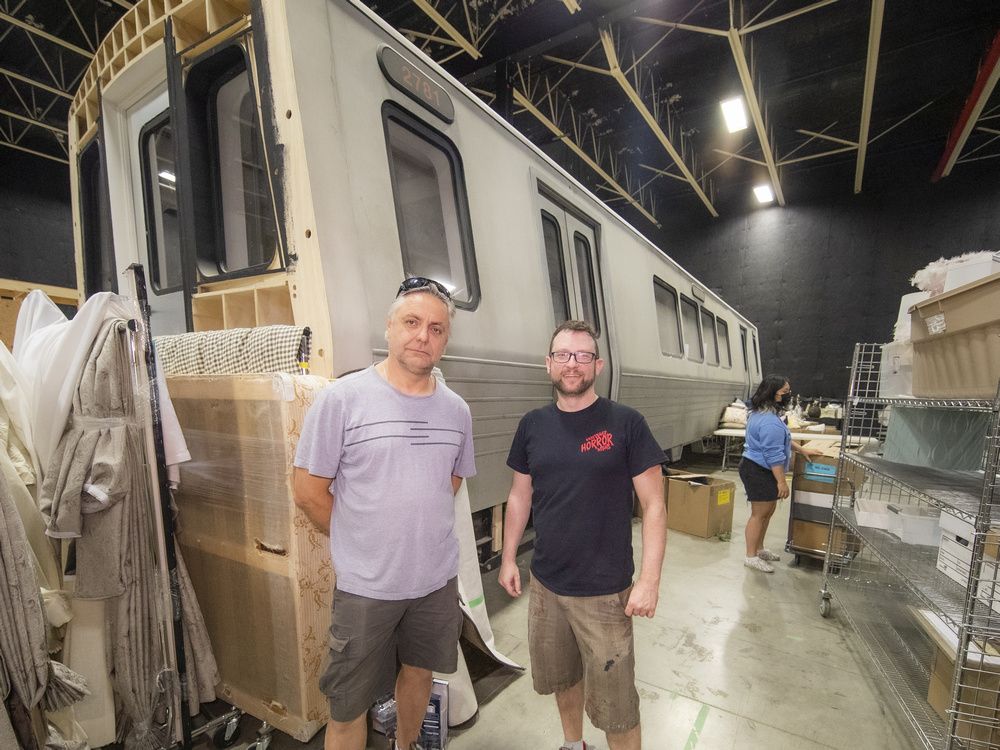 If you wanted to buy your own personal SkyTrain car, it would probably cost you $3.5 million.

That’s about 0.1 per cent of the cost of a SkyTrain car.

The 48-foot-long, 10-foot-wide replica was built for a new Netflix TV series, The Night Agent, and was sold as part of a giant Set Dec and Wardrobe online auction on July 18.

Because the replica is so big, the auction took place at the William F. White Fraserwood Studio in Richmond, where the scenes involving the subway car were filmed.

The car was purchased by Vancouver Horror Nights, which puts on a giant haunted attraction around Halloween.

On Wednesday the company’s creative and casting director Ryan Purdy and a crew were at Fraserwood Studio to pick up a bunch of stuff the company bought at the auction. They’ll also have to figure out how to move the car, which was built in three sections and will have to be taken out by trailer.

The subway car will become a “haunted attraction” at Vancouver Horror Nights, which is only three years old but has grown by leaps and bounds — it started off with 6,000 sq. ft., and this year will be putting on a 100,000-sq.-ft. extravaganza at the old Sears location in Coquitlam Centre.

“Stick some hydraulics underneath it and some airbags, shake it around, take people for a little trip. We don’t know if we’ll do like a ‘derailing experience,’ we might fill it with zombies … I’ve got a whole year to plan out all the evil things I’m going to do to people.”

It’ll be up to all the shimmying and shaking because Jacek Scheller and his construction crew built it “to be safe and secure” for up to 40 riders during filming.

“The art department designs it and tells you what they want, but it’s us on the floor that figure out (how) it actually goes together,” explains Scheller, the construction foreman for the build.

“Working with the stunt guys and the special effects guys to know what their parameters are, and what they’re going to do with it. If they’re going to shake the crap out of this thing, I need to make sure it doesn’t fall apart.”

Scheller said the subway car is mostly made of wood, engineered lumber and beams like microlams and TJ joists, and a steel frame.

“We had a hydraulic ram attached to it and the thing shunted,” he said.

One side of the car looks exactly like a Washington subway car — the wood has been painted so it looks like weathered aluminum. The other side is unfinished wood and looks like a film set.

“For budget purposes we only needed to finish one side of it,” said Scheller.

The film biz is always in a hurry, so there was quite a crew involved in the construction.

“We have time constraints, obviously, so I had to have a lot of people building different components all at the same time,” said Scheller, who has built sets for films like Star Trek Beyond and Godzilla.

“I’d say at one time I probably had 25 or maybe even 30 people working at the same time, including painters. On top of that there would have probably been four or five special effects guys crawling on it.”

But it made for a bit of cinematic magic, a Washington, D.C., subway car in a Richmond, B.C. film studio.

More news, fewer ads, faster load time: Get unlimited, ad-lite access to the Vancouver Sun, the Province, National Post and 13 other Canadian news sites for just $14/month or $140/year. Subscribe now through the Vancouver Sun or The Province.