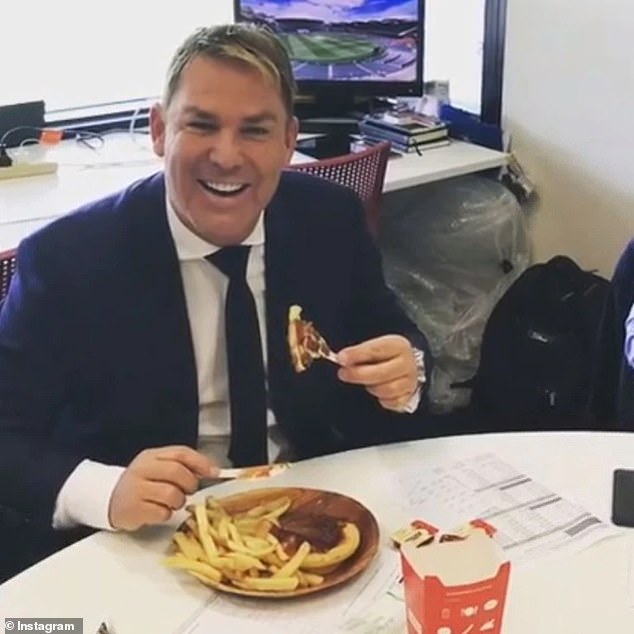 There aren’t too many certainties in life but if you were working as a sportswriter from the 1990s onwards there was one thing you could be 100 per cent sure of.

At some stage, you would hear these words:

In the days since the shocking death of one of the world’s greatest cricketers at the age of 52, two things have become glaringly obvious.

Shane Warne knew a lot of people – and they all seem to have a story to tell.

I would never claim to have known Shane Warne well. I interviewed him a few times and as a member of the media we crossed paths over the years.

But even so, I too have a few Warnie stories – some first-hand, some second and third from reliable sources – to add to the portrait currently being painted of this multi-faceted, larger-than-life, one-off character.

Shane Warne’s love of pizza, baked beans and cigarettes added to his legend in the eyes of many sports fans

While not a big believer in coaches when playing for Australia, Shane Warne was always willing to give back to the sport that made him a household name

In 2004, as Warnie was coming to the end of his 12-month suspension after testing positive to a diuretic on the eve of the 2003 World Cup, his manager thought it would be a good idea if he reconnected with the Melbourne cricket media to pave the way for his return to the game.

It was decided he should take them all out to dinner.

Now Warnie was not noted for his appreciation of fine cuisine. His idea of cordon bleu was a heavily buttered bread roll with lasagna filling, and the story of Heinz dispatching a mercy flight carrying crates of canned baked beans to fortify the champion leg spinner on a tour of India are part of the Warne legend.

Even so, the invitations were duly sent out to the cream of Melbourne’s cricket writers and commentators, ushering them to one of the city’s finest restaurants.

There they gathered, among the starched tablecloths and crystal glasses, with Warnie, the congenial host, seated at the head of the table.

As the pre-dinner drinks were being enjoyed, the waiter went around the table taking the food orders. When he got to Warnie, he was waved away.

During his career Warne gained a reputation as the blonde-haired, blue-eyed hero of the sport, a champion bowler on the pitch and a playboy off it

He then pulled out his mobile phone, tapped speed-dial and held a brief conversation.

It was when the entrées were being served that a pizza delivery man walked up to the table and placed a box in front of Warnie, who opened it and began to eat.

The maître d’ came over apologetically.

‘Oh okay, no worries,’ said Warnie as he picked up his pizza and headed for the door.

According to those who were there, he then found a bench outside, sat and enjoyed his pizza and a cigarette, then rejoined his guests as they finished their meals.

‘Great,’ he said, and asked to see the dessert menu.

It’s fair to say that Shane Warne was never a big believer in the concept of ‘toeing the line’. When it came to perfecting the craft of spin bowling, no-one was more dedicated, but he took a rather more relaxed approached to rules, laws and social norms.

He was never an overt lawbreaker, more – as he said himself after admitting to taking money from an Indian bookmaker in 1994 – ‘naïve’.

It seemed as though if he couldn’t see any good reason why he shouldn’t do something, he’d do it. More often than not he got away with it. Other times the ramifications ranged from extreme to a ‘rap over the knuckles with a feather duster’.

His inability to ‘resist temptation’ led to the end of his marriage to Simone Callaghan; the bookie incident led to around $15,000 in fines and public humiliation, and the diuretic incident cost him 12 months out of the game and hundreds of thousands of dollars in salary and lost endorsements.

I witnessed two incidents that were at the other end of the spectrum.

In 2015 I was covering the Ashes in the UK. By then Warnie was part of the media, commentating for Sky.

He missed the first Test because he was busy winning $225,000 in a poker competition, but he was there for the second at Lord’s, and soon made his presence felt.

Also at the Test was Warnie’s good friend, former AFL star Campbell Brown, who just days earlier had raised $100,000 for the Shane Warne Foundation with an unsuccessful bid to swim the English Channel.

The story of Brown’s attempt had been big news in the days leading up to the Test so my colleagues and I in the media box were surprised to look down to see him on the field before the start of play on the second day.

‘Hey, that’s Campbell Brown,’ said someone, and we all watched as he took selfies of himself next to the wicket and was then escorted from the field by security.

The term ‘hallowed turf’ could have been invented to describe Lord’s. It is a place only a very select group of people are allowed to tread, and an ex-AFL player isn’t one of them.

Brown would later claim on radio that his mate Shane had said that it would be okay if he took a bit of a wander out to the middle during the pre-play pitch inspection.

‘I’d just done the swim for his foundation, so he organised our tickets,’ he said. ‘He said I could go down to the ground as well. Because it was a last-minute thing, they didn’t get the right accreditation, so I got flung an accreditation from one of the boys and went out there.

‘I was out there for about five minutes, took a snap on the pitch and then one of the English officials came over and had a look at the photo on the accreditation and realised it wasn’t me.’

While Brown was careful not to give up his mate Shane, it was common knowledge amongst the media that the ‘one of the boys’ who ‘flung’ his accreditation in Brown’s direction, was Warne.

Which should be a lesson to anyone trying to sneak onto Lord’s: when using false accreditation, best not to have one bearing the photograph and name of one of the most famous people in the world.

The authorities at Lord’s were not impressed, and they weren’t too happy later in the Test when Warnie again overstepped the mark.

As part of the media facilities during the series, one of the sponsors had provided the services of a masseuse who had set up in an alcove at the back of the press area.

To be honest, her services weren’t being particularly well utilised by the press corps. After all, who would want to be watched by their colleagues as they had a massage in the middle of a Test match?

Who apart from S.K Warne, I mean?

I think the idea was that the young lady might give some of the overworked journos a quick neck or shoulder rub before they returned to the keyboard or mic.

The larrikin and father of three was once engaged to actress Liz Hurley (pictured, the couple at the races together in Ascot)

Not Warnie. He bounced into the room, and to the astonishment of the masseuse and the crowd of media who had quickly gathered as word spread, proceeded to remove his shoes and socks – and trousers – and lie down on the floor mat dressed only in his shirt, tie and stretch boxer shorts.

Warnie got his massage, but it didn’t take long before a message arrived in the media box from the England Cricket Board PR officer stressing that in future all massages would require recipients to be fully dressed.

At the height of his playing days Warnie’s management came up with the brilliant idea of marketing a Shane Warne Spin Bowling Kit for kids.

Sold through the big retail chains it consisted of a bright yellow indoor cricket-style ball with dots and lines showing the correct finger placement for various deliveries, plus an instruction book with photos of Warnie demonstrating the grips.

Needless to say, it was a huge seller at Christmas time with thousands of youngsters (and the not so young) practicing to bowl like Warnie in backyards and parks around the country.

As a special promotion, the marketing campaign also offered the ultimate prize, with one lucky kid not only winning a Shane Warne Spin Bowling Kit, but also having it presented by Shane Warne himself during the lunch break during an upcoming Test at the SCG.

All went as promised, with the lucky boy and his parents standing expectantly outside the door to the players’ dining room as Shane and the rest of the teams trouped past.

‘This is the boy who won the prize. Could you just shake his hand and let them take a photo? Won’t take a second.’

‘No worries,’ said Warnie, taking the box and handing it over. ‘Well done mate.’

Warne carved out a Test career for the ages, with 708 wickets making him an Australian cricket legend

After posing for a quick photo with the boy and his parents, Warnie took the box from the boy’s hands and started ripping the wrapping.

‘Let’s open it up,’ he said, and then led the boy across to the nets where for the entire lunch break, he coached him on the finer points of spin bowling, making that little yellow ball dip and turn and do things that it would never come close to doing again.

I wasn’t there to see it, but one of my colleagues was and he said it was like a big brother playing with his little brother in the park. It was hard to know which one of them was enjoying it more.

When the lunch break ended, the greatest cricketer in the world looked almost disappointed.

‘See you mate,’ he said and headed off, like a kid being called home for dinner.