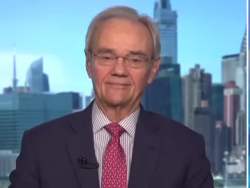 NY Post columnist Michael Goodwin discusses Biden’s presidency and the expected decision on the gas tax holiday to alleviate the pain at the pump.

“Look I think, every president runs into problems, goes with the turf with Joe Biden you never get a change of gears, and I referenced the Associated Press interview he did last week first one in four months that he did, solo interview, other than with late night comedians. Here was an opportunity to reset the nation’s view of him I mean polls are what 38, 39% approval everywhere. Even in New York 35% which is amazing. And yet he has this interview 30 minutes, and basically says nothing, he makes no news. He — the big takeaway is that he doesn’t think inflation — recession is inevitable, that is it, I mean no sense that I am going to change course I am going to shift gears, we’re going to do something different. I mean that would be the proper use of an exclusive interview like this by the president he doesn’t do that it is the same Joe Biden, blaming Putin, blaming Trump, blaming everybody but himself. Even when he falls off bike he blames the pedals.

There is always somebody else, and President of the united States, the President of the United States looks weak I think that is his problem, is that people look to him for answers, he doesn’t have any they look away so I think he is running out of time certainly before midterms to give people another reason to trust him, on this inflation issue.”