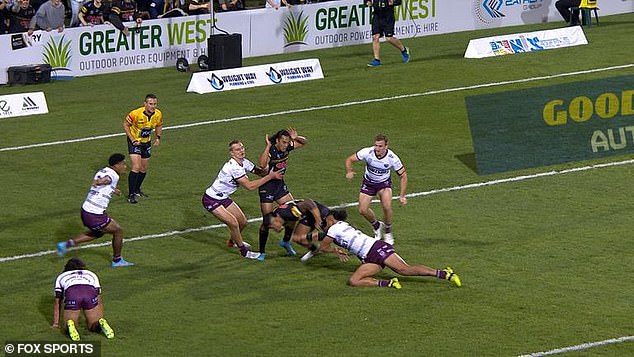 Trepidation at how some significant rule changes would be met in the new NRL season were overshadowed by some old-fashioned controversy over obstruction laws in the curtain raiser between Penrith and Manly.

In the biggest rule tweak of the year, referees will no longer give the attacking team another set of six after ruck infringements inside the 40-metre zone, and will instead have to penalise the defensive teams.

The NRL said the change was motivated by a desire to make the game faster and prevent teams from deliberately slowing the ruck early in the set.

Any concerns over the impact of the new rule, however, was overshadowed by a different kind of controversy at BlueBet Stadium.

The defending champions had two tried ruled out in the first half, with Stephen Crichton and Brian To’o denied by the officials.

Crichton looked to have scored the opening try of the campaign, only for the video referee to disallow the try after Panthers Liam Martin was adjudged to have illegally obstructed Manly’s Kieran Foran in the build-up.

It was the second disallowed try, however, that caused major uproar.

To’o’s brilliant effort was rubbed out after the referee ruled Panthers No6 Jarome Luai had obstructed Sea Eagles star Tom Trbojevic shortly before his teammate crossed the whitewash.

‘Brian To’o comes back and gets through the tackle of [Haumole] Olakau’atu and I don’t think Tom Trbojevic is impeded there.’

Footage showed Luai trying to get out of the way as To’o weaved his way through the Sea Eagles defence before touching down and Ennis suggested the Panthers No6 had nowhere else to go.

‘He [To’o] cut so hard off his left foot and he gets back on the inside and through sheer strength gets rid of Olakau’atu,’ he added.

‘He’s just running through there Luai, trips over, where’s he supposed to go? He’s trying to get out of the way. That’s a big call.’

‘Brian To’o gets to the line and I agree that Jarome Luai was in front of the ball carrier but he did not play any part in stopping Tom [Trbojevic] make the tackle,’ Alexander said.

‘He puts the footwork on, To’o, and Tom actually pushes off Luai to get closer to Brian To’o.

‘So that wasn’t an obstruction play, that should have been a try.’

The two disallowed tries ultimately did not prevent Penrith for making a successful start to their title defence, as they trounced the Sea Eagles 28-6.

The new set of six isn’t the only aspect of the game to have been tweaked ahead of this season. Teams will now be given a free interchange when a player is the victim of foul play that results in a sin bin or send off, as opposed to when players were put on report.

The NRL has also removed the right for trainers to stop play in the event of a player being injured, with exception of head knocks.

Meanwhile, the Rugby League Players Association claims it is concerned for player safety and says an NRL decision to introduce fines for shoulder charges and crusher tackles is a step backwards.

Just hours before the start of the season, the NRL revealed an overhaul of the controversial system in a bid to simplify player penalties. But it is in the finer details that the union have expressed concerns.

They remain frustrated by the implementation of standard fines across the board, after calling for them to be abolished over the summer.

They are also miffed by the decision to make grade-one shoulder charges and crusher tackles into fines instead of automatic bans.

The union were only informed of the looming changes at a meeting on Wednesday afternoon, after five months of reviews and consultation.

‘We believe the decision to move grade-one shoulder charges and crusher tackles to a finable offence is a step backwards in decreasing instances of two of the most dangerous on-field discretions,’ the union said in a statement.

‘The RLPA’s genuine concern is the health and safety element of crusher tacklers and shoulder charges.

‘The players do not believe fines have acted as a sufficient deterrent to any offences and, despite this, these two offences have now become finable offences.

‘The RLPA has asked what evidence was used to determine that fines act as an effective deterrent from on-field foul play.’