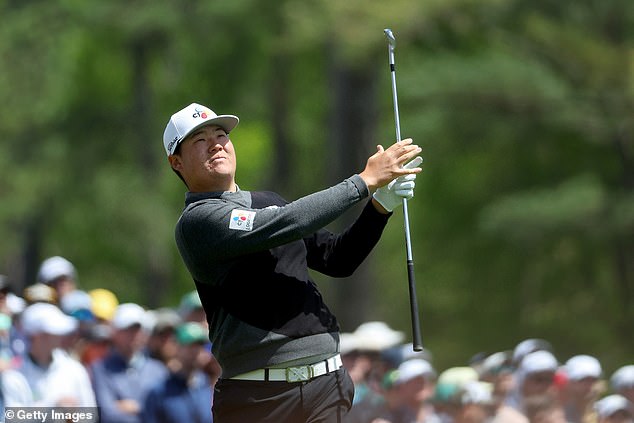 Im Sung-Jae was eight when he beat his father on the golf course for the first time. And his dad’s not bad at golf.

Proudly wearing the white boiler suit of the Augusta caddie — No 37 — he carried his son’s bag in the traditional par-three tournament earlier this week.

Given a hit at the ninth, Im Ji-taek nailed his tee shot to an island green within five feet of the pin.

Big smiles and high fives all round. Sung-jae’s laughter suggested an element of surprise. Let’s just say it’s not the most textbook swing.

Im’s parents used to follow him, hotel to hotel, when he lived an initially nomadic existence on the PGA Tour. In 2020, he bought a house in Atlanta. The following March, Robert Aaron Long was arrested after a shooting spree in the city in which eight people were killed including six Asian women, with spas and massage parlours being specifically targeted.

It is not easy being Asian in America in the age of ‘kung flu’. Violence against Asian-Americans has risen to such an extent that it was the subject of a Congressional hearing as recently as March 21.

A Republican representative from Texas contrived to invoke lynching as having made a positive contribution to society but, that apart, most got the message. In 2020 and 2021, after the coronavirus pandemic, recorded violence against Asians and Asian Americans rose by 11 times on previous years.

Into this hostile environment steps Im, and the other Asian competitors at the Masters. It’s quite the juxtaposition.

At Augusta, the patrons are very polite and respectful because this is America on its best behaviour, with not even running allowed, let alone the boorishness of some galleries.

Yet it’s also fantasy land. Atlanta is just a two-hour drive away, and the logo of the Masters is a representation of the state of Georgia. After the 2021 shootings the LPGA — in which 29 of the top 50 players are either Asian or of Asian descent — contacted its entire roster to advise caution when venturing outside the tour bubble at tournaments.

Choi Na-yeon, a former US Open winner from South Korea, said she advised her mother not to travel to America for tournaments, as she wouldn’t feel safe with her there.

Last year, Mike Whan, the former LPGA commissioner, said there had been incidents involving Asian players away from tournament venues during his tenure, some necessitating security involvement.

Making Im’s presence at the top of the leaderboard for long periods as he made his way around Augusta on Friday important. Asian-American relations need normalising right now and Im is a normal guy, beyond his exceptional golf game.

He lists his favourite food as Jeju black pig —Korea’s culinary equivalent of Japan’s Kobe beef — and looks like a young man who enjoys his food. He has shown no inclination to embrace the athleticism now popular on tour and when he lived in hotels would always search the area for the most popular Korean restaurants.

His English is not the best but he smiles a lot, and he charts his way around the course like a player much older than his 24 years.

And this is some game. Im beat Collin Morikawa to become Rookie of the Year on the 2018-19 PGA Tour and came second to Dustin Johnson at the 2020 Masters. The overnight leader, he wasn’t showy or cavalier as he took on Augusta in increasingly strong winds but showed great maturity for his age.

This wasn’t a day to take on the course and, having established solid under-par numbers on day one, Im was too smart for that. He started poorly, dropped a shot, made it back within two holes and then played par golf through the rest of the front nine, as others struggled to make inroads behind him.

It wasn’t greatly eye-catching — much like his black and grey attire, after the carnival pinks preferred by some of the field on day one — but it was excellent course management.

And if he was nervous on the first, he is certainly not the only Masters leader to suffer jitters. It is such a strange hole, the opener. To the layman it looks so straightforward. A giant expanse of fairway that looks harder to miss than hit, a seemingly straightforward approach to the green — yet, statistically, it plays like one of the hardest holes on the course. Why?

It’s Augusta. The adrenalin pumps, the enormity of the occasion hits home. Having put himself in a fine position off the tee, Im then missed the green to the left. It still left a straightforward up and down from there.

But it’s the first at Augusta. Nothing’s straightforward; certainly not heart rates. So Im chipped, came up short into the bank and watched as the ball trickled back down the hill towards him. He played the shot again, successfully this time, but it was too late. Shot dropped. Joint leader.

Yet he got it back almost immediately. On the third, he hit from the tee to within 64 yards of the pin, played his second to 24 feet and sank his birdie putt. And as the wind picked up, there he stayed, atop, alone: until the 10th.

Im pushed his approach shot left, some 25 yards off and missed a 7ft putt. Co-leader again, but only with players not yet out on the course. Those playing were struggling as much, if not worse. The best score of the day at that point stood at one under.

So it wasn’t pressure that blotted Im’s round sporadically, it was the conditions. Judgments became more difficult. He was short from the tee on the par three 12th, found sand, chipped to five feet, missed his putt. He rolled back into the water at the 15th, then spurned a putt to save par from four feet.

There were birdies, too, a putt drained from 27ft on the 16th. It went up and down in the way the front nine simply didn’t. He missed another eight footer, but left the 18th three under and tied first, safe back in the clubhouse.

And other positives remained. On the 10th, as Im sent one sailing down the middle a very clear Georgian voice announced: ‘Attaboy.’

He may have had a wager, he might just admire good golf, but in the present climate that one word said much about the importance of Im.