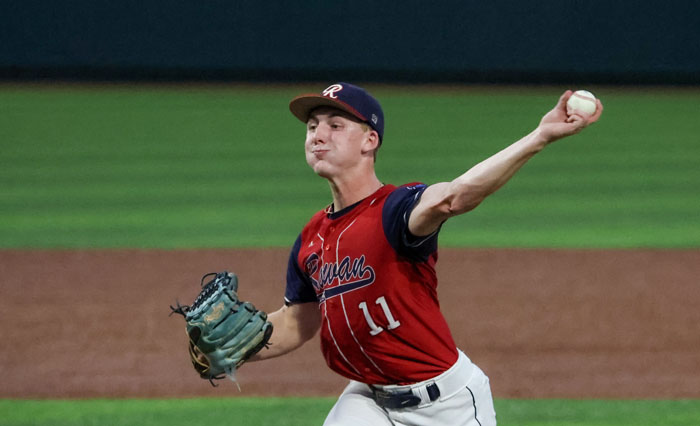 A 4-1 lead fueled by two hits each by Luke Graham and Jackson Deal turned into a 7-4 loss, but no one seemed to mind too much.

That’s because in the one that counted on Friday night, Rowan did hold off Randolph 6-4.

And at least in theory, it meant a more favorable seeding for the upcoming state tournament at Campbell University.

Rowan entered Friday’s game at Newman Park with the plan of using its top two pitchers to try to win a championship — Jake Blevins to open and Gouge to finish.

“The limit either of them was going to throw was 60 pitches,” Rowan head coach Jim Gantt said.

They pushed the limit. Blevins sailed through the first three innings, but he had to weather a high-stress fourth. He finished his night with 56 pitches.

Gouge was in serious trouble in the fifth and the seventh. He had to strike out five guys and needed a game-ending 1-2-3 double play to survive three innings. That double-play grounder that was hit back to him came on his 57th pitch.

Well, Blevins and Gouge. Or maybe Gouge and Blevins.

Gantt isn’t certain yet which order they’ll go in. Rowan’s coaches will do the research, and whichever of their upcoming opponents has the most lefty hitters likely will be seeing Gouge.

Keep in mind that a pitcher who doesn’t exceed 80 pitches on the first day of the tournament would be eligible to pitch again on the final day of the five-day tournament.

Rowan (34-8) starts on Tuesday at 1 p.m. in Jim Perry Stadium at Campbell University with Pitt County, which beat Rowan earlier this season.

Rowan’s second game will be Wednesday at 4:30 p.m. against Wilmington, state runner-up last season and one of the perennial powers.

Rowan’s third pool game will be Thursday at 4:30 p.m. against newcomer Queen City (Charlotte). The starter for Rowan in that one will be based on who is needed in relief in the first two games, but ideally, no relief will be needed.

Leading candidates to be Rowan’s third starter are Alex Hagler, Zander Burton, Casey Crawford and Nate Green. Drew Burton has established himself as a strong, multiple-innings relief guy. Johnson and Graham have been able to finish off games. Rowan even took a look at Deal on the bump on Saturday.

The opposite pool from Rowan will include Randolph County, which has won four out of six against Rowan. In the mixwith Randolph are Hope Mills and heavyweights Cherryville and Fuquay-Varina. Fuquay-Varina beat Rowan County in the semifinals in 2021 on its way to the state title.

Rowan (34-8) didn’t play an official game between July 13, when it eliminated Mocksville, and Friday’s Area III championship game with Randolph. That was because of Eastern Randolph forfeiting a semifinal series due to a shortage of players. But Rowan didn’t display a lot of hitting rust. Johnson, Deal and Schenck, the top of the lineup, had two hits each.

Where Rowan might be rusty is the pitching staff beyond Gouge and Blevins. Those arms haven’t seen a lot of work, but several did get some time on the mound in Saturday’s “exhibition.”

Rowan has done exceptionally well in state tournaments since American Legion switched to a single-site format in 2000.

Rowan has won at least one game in every single-site state tournament and has posted a record of 35-17 in the event.