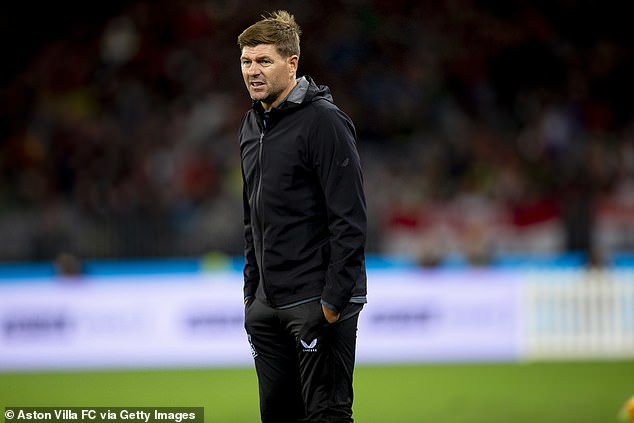 Steven Gerrard has already built a reputation as a strong disciplinarian from his time at Rangers and the start of his Aston Villa career. It is this attribute that appears to be a keen draw of the club’s owners, judging by the actions of his predecessors.

The Liverpool legend – who took over at Villa Park last November – is targeting a top-10 finish in the upcoming campaign. One of his first actions at the club was to introduce a ban on certain food items in the club canteen, including tomato ketchup.

And a leaked list of fines at Villa Park, from before the 42-year-old’s arrival, shows that the ruthless approach is something the Villa chiefs take kindly to.

In a leaked fines list doing the rounds on social media, which Sportsmail understands to be at least 12 months old, being late to the training pitch proved to be a very expensive exercise – £200 a minute, to be precise – while forgetting to bring a birthday cake set players back £50.

Other fines included snus – a popular type of chewing tobacco – being left anywhere (£200), no flip flops in the shower (£100) and leaving cutlery at the table in the canteen (£100).

A list of fines handed out to players has been leaked. The list pre-dates the arrival of Steven Gerrard as Aston Villa boss

On the pitch, being booked for dissent meant Villa’s guilty players had to cough up £200.

Anyone issued a red card had to take the entire Villa team out for a meal – and do so within four weeks of the day they were given their marching orders.

It is not the first time details of player fines have been leaked from the Villa Park dressing room. In 2016, Roberto Di Matteo’s Championship side were subjected to a list focused on punctuality, clothing and mobile phone issues.

Previously the late Gerard Houiller handed down a list of financial penalties so severe that it had stars considering their future at the club.

The likes of Ashley Young, Gabriel Agbonlahor and Stiliyan Petrov were among players so disgruntled by the Frenchman’s attempts to arrest the club’s slump that they looked to leave in 2011, with mobile phones completely banned from the dressing room.

This season, the permanent signing of former Reds star Philippe Coutinho and other high-profile acquisitions such as Diego Carlos and Boubacar Kamara has bolstered the Villa squad significantly.

Gerrard will demand excellence from the dugout, and his team will look to hit the ground running in their season opener when they face Bournemouth at Dean Court.

Villa have every reason to feel confident after they drew 2-2 with Manchester United in Perth on July 23, with winger Leon Bailey a standout.

The permanent signing of Philippe Coutinho and other high-profile acquisitions such as Diego Carlos and Boubacar Kamara has bolstered the Villa squad significantly (pictured, on their pre-season tour of Australia)

‘He changed the game. Leon showed energy, speed and a hunger to cause problems,’ Gerrard said when reflecting on the friendly versus the Red Devils at Optus Stadium.

‘He’s come back in pre-season a different player…not just from a technical point of view, but his demeanour and his body language.

‘We need to keep him healthy, but so far for Leon, he’s sending a massive signal to me that he wants to be in our XI.’

Villa have enjoyed an impressive pre-season campaign in Australia, as they are unbeaten

Villa also beat fellow Premier League side Leeds United on their pre-season tour down under as well as A-League side Brisbane Roar.

Both matches ended up 1-0 victories for Gerrard’s men, as they continue to enjoy an impressive pre-season campaign.

Gerrard took over last November when Dean Smith was sacked and though he steered Villa comfortably away from the relegation zone, he and billionaire owners Nassef Sawiris and Wes Edens have far more ambitious targets this season.

Though Villa have completed the transfers they had prioritised, Gerrard is still keen on signing another midfielder depending on the futures of Douglas Luiz and Carney Chukwuemeka, who both have just 12 months remaining on their contracts.

Gerrard added: ‘We want to be one of those teams that tries to upset the natural dynamics of the Premier League.

‘If that means we snatch a European place, fantastic, because we’ve got to reach for the stars. But the minimum for me is we’ve got to be operating in the top-half of the league.’