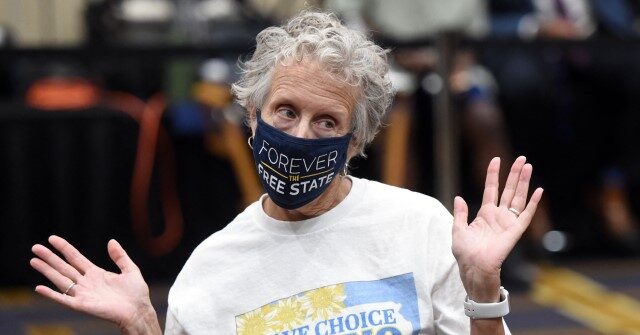 The pro-life movement suffered a defeat in Kansas on Tuesday when the state overwhelmingly voted to uphold abortion “rights.”

The vote in Kansas on Tuesday centered on whether or not the state would remove abortion rights protections in the State Constitution, potentially paving the way for “state lawmakers to pass far-reaching abortion restrictions, or even to pursue a ban,” according to the New York Times.

With 76 percent reporting, the “No” votes to keep abortion rights in place beat the “Yes” votes by double digits – 62.2 percent versus 37.7 percent as of this writing. Both NBC News and the New York Times have projected “No” as the referendum winner.

“This is huge: abortion rights were on the ballot for the first time since Roe, and the people of Kansas voted to preserve access,” tweeted Sen. Elizabeth Warren (D-MA). “I’m grateful down to my toes for everyone who helped stop this dangerous ballot measure in its tracks.”

This is huge: abortion rights were on the ballot for the first time since Roe, and the people of Kansas voted to preserve access. I’m grateful down to my toes for everyone who helped stop this dangerous ballot measure in its tracks. https://t.co/krqSdoK4E2

Americans across the country raised $2 million in a week for abortion rights to stand up to a Republican congressmen.

If abortion isn’t at the top of your campaign list— you need to reevaluate.

As NBC News noted, the Kansas vote marked the first time Americans have gone to the ballot box to decide the issue of abortion in the wake of the Supreme Court overturning Roe v. Wade.

“Anti-abortion activists had argued the Kansas ballot question created an opportunity to put the issue in the hands of the voters via elected state lawmakers,” noted the outlet. “Supporters of abortion rights warned that approval of the ballot measure would almost certainly result in the elimination or curtailment of existing rights in a state that has more lenient laws on its books compared to many of its neighbors.”

The proposed amendment came after the Kansas Supreme Court ruled in 2019 that the State Constitution guaranteed a right to abortion, taking it out of the legislature’s hands.

Good news is that the Kansas constitution doesn’t actually protect the killing of unborn human beings — only an activist state Supreme Court abusively pretends that it does. https://t.co/Qp8oIA5TgN

Leading up to the vote, pro-abortion activists across the country rallied to Kansas in support of the “No” vote.

Abortion rights are on the ballot in Kansas tomorrow. Vote NO to defend safe and legal abortion. https://t.co/2PsEJm2Z3u