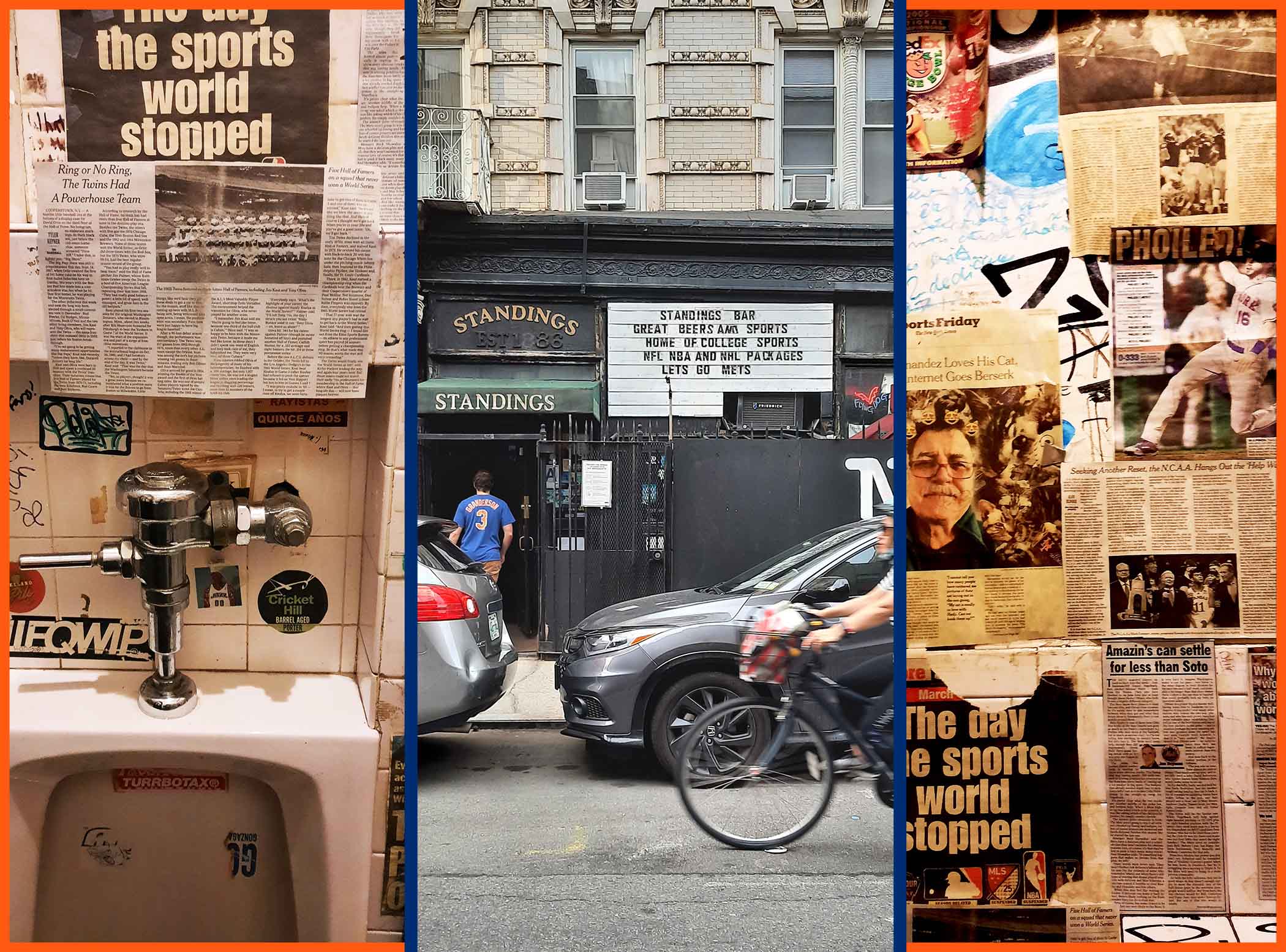 Even from the vantage point of Buck Showalter’s old stomping ground, Baltimore, some of us saw this coming at the start of the season: In a best-case scenario, the Mets and Yankees would both be in first place in their respective divisions when the teams met for the opening pair of Subway Series interleague games at Citi Field, on Tuesday, July 26, and Wednesday, July 27.

The Mets were dealt a hand of two aces even before the season started, adding three-time Cy Young Award winner and future Hall of Famer Max Scherzer to a starting pitching rotation already fronted by Jacob deGrom, who appeared ready to return to form as one of the game’s elite starting pitchers after missing the second half of a 2021 season with an elbow injury in his right-handed throwing arm.

It hasn’t gone quite according to plan for the Mets. One week before Opening Day, deGrom was diagnosed with a stress reaction, not quite a stress fracture, in his right shoulder blade, and sat out the entire first half of the season. But there they were, sitting atop the National League East division with a 59-37 record, two games in front of the hard-charging Atlanta Braves as they entered the clash with their crosstown rivals.

The Yankees might not have been considered the odds-on favorite to win a tightly contested AL East, but the Bombers burst from the gates compiling wins at a historic rate and drawing comparisons to their fabled squads of yore. The Yankees rolled into Queens with an MLB-best 66-31 record and a 12.5 game lead over the second-place Toronto Blue Jays, but also appeared somewhat mortal, going 5-5 in the last 10 games.

And so, as Yogi said, it was “like déjà vu all over again,” with new Mets manager Buck Showalter staring down the nemesis Yankees, with whom he cut his managerial chops back in 1992. He had to be relishing this long-awaited opportunity to exact some revenge from the team that cut him loose after the 1995 season, one year before embarking on its dynasty run of American League pennants and World Series championships, in the late 1990s and early 2000s.

Since the advent of interleague play, in 1997, the Yankees have held the upper hand, posting a 76-58 record against the Mets going into last week’s two-game series. This was the first time in the 25-year history of interleague play that the Mets and Yankees would meet after the All-Star break with both teams having the best record in their respective divisions.

All around town, Mets fans seemed more excited by their team’s good fortune than Yankees fans, who appeared to take it all for granted, despite finishing first in their division only two times in the past 10 years. I covered a lot of ground while I was in town for the Subway Series games, and I saw many more Mets hats, jerseys, and other blue and orange accouterments than the traditional black (midnight navy blue) and white Yankees garb.

Nowhere was this more apparent than at Standings, a delightfully Mets-centric tavern at 43 East 7th Street, in the East Village, where the Flushing Faithful outnumbered the Bronx denizens by approximately nine to one.

“Why are they here?” wondered M.E. Peters, a Miami transplant who adopted the Mets as her new hometown team in 2012. “I like it here because there are not too many Mets bars in the city. In my opinion, just about every bar in Manhattan is a Yankees bar.”

Peters says she chose the Mets because of their underdog status but initially had trouble understanding the deep-seated nature of the two teams’ rivalry.

“At the end of the season, I would root for the Yankees if the Mets weren’t playing. I didn’t realize there was so much animosity. I thought we should all root for New York,” said Peters, adding, “I also didn’t grow up in a city where there were two teams.”

On Tuesday night, it didn’t take long for Mets fans once more to feel their traditional underdog role, as Aaron Judge and Anthony Rizzo clubbed back-to-back home runs, giving the Yankees a 2-0 lead in the top of the first inning. Judge’s 38th home run of the season and his subsequent blasts since (43, as of August 2) have him on pace to be the first American Leaguer to hit 60 in a season since Roger Maris’s 61, in 1961.

A hush came over the boisterous crowd at the bar as we bowed our heads and took big gulps of our beers, preparing for the worst while the 10-percenters straightened up and resumed their haughty postures.

The bar erupted when Mets All-Star right fielder Starling Marte ripped his 10th home run of the season down the left field line. Franciso Lindor and Pete Alonso hit a pair of doubles in succession, and Eduardo Escobar followed with a home run. The Mets had a 4-2 lead, and all was right in the world.

Eight innings and four or five beers later, the Mets had taken the first game of the series 6-3, and breathed easily knowing that Max Scherzer would be back on the bump the next night.

Mets fans danced their way out of Citi Field and into the season’s second half full of promise.

The mood outside Citi Field was electric on the windy Wednesday night, as fans gathered around the statue of legendary Mets hurler Tom Seaver and the “Home Run Apple” at Shea Stadium.

Despite the requisite call and response of “Let’s Go Mets–Yankees Suck” that made its way around the ballpark just prior to the start of the game, there was an air of camaraderie between the rival fan bases, akin to what Standings patron Peters had longed for. Pairs and groups of bipartisan fans sat with each other at the game. Right on cue, a big Yankees fan from Brooklyn handed his smaller Mets fan buddy a beer, delivering it with a friendly slap—or more of a pat on the face.

With a sell-out crowd of more than 43,000 still mingling its way around the ballpark, Scherzer set the Yankees down in order in the top of the first inning.

Alonso led off the bottom of the second with a solo home run, his 26th of the year and his National League-leading 84th RBI.

Lindor singled home catcher Tomás Nido in the bottom of the third, and the Mets clung to a 2-0 lead while Scherzer continued to mow the Yankees down through seven innings. Facing his final batter of the game, Scherzer struck out big bad Aaron Judge for the third time, squelching a rally with two on and two out in the top of the seventh.

Showalter made the questionable decision of bringing starter David Peterson on to relieve in the top of the eighth. It only took five pitches for Peterson to squander the lead, walking Rizzo on four pitches and immediately surrendering a two-run homer to second baseman Gleyber Torres. But Torres wasn’t going to beat the Mets on this night, after Scherzer had effectively removed the bat from Judge’s hands.

Mets third baseman Escobar led off the bottom of the ninth with a double, and came around to score the winning run two batters later, on a walk-off single from Marte.

Mets fans danced their way out of Citi Field and into the season’s second half full of promise. With the return of Jacob deGrom to the Mets rotation, and whatever acquisition might be made before the trade deadline, at 6:00 p.m. on August 2, the Mets appear poised to make a pennant-race run. The team followed the Subway Series with a three-game sweep of the Marlins, posting a 64-37 record on August 1.

Despite a recent sputter, the Yankees still hold a comfortable, if not quite commanding, lead in the AL East, and the American League’s best record, at 69-34.

In what’s starting to look like a World Series preview, the teams will meet in the second round of the Subway Series at Yankee Stadium, on August 22 and 23. ❖

Baltimore-based Charlie Vascellaro is a frequent speaker on the academic baseball conference circuit and the author of a biography of Hall of Fame slugger Hank Aaron. His writing has appeared in the Washington Post, the Baltimore Sun, the Los Angeles Times, the Chicago Tribune, and other publications.

NOTE: The advertising disclaimer below does not apply to this article, nor any originating from the Village Voice editorial department, which does not accept paid links.

Advertising disclosure: We may receive compensation for some of the links in our stories. Thank you for supporting the Village Voice and our advertisers.