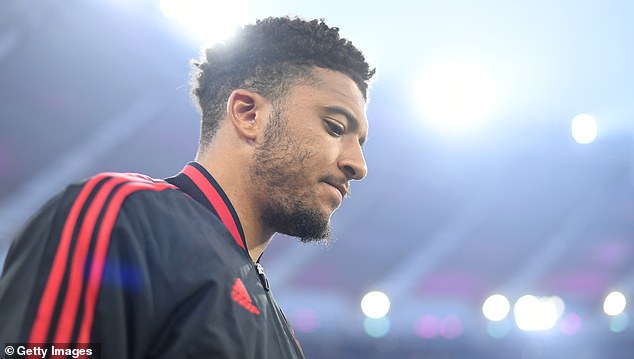 By Michael Rudling For Mailonline

Manchester United midfielder Jadon Sancho is confident of improved returns on the pitch from his side after Erik ten Hag has made them look like ‘a whole different team.’

United are unbeaten in the four pre-season friendlies they have played under ten Hag, with three wins (including a 4-0 win over Liverpool) and a draw.

Sancho has played a key role in the side’s early success, with three goals in four games, only one less than his tally for the whole of last season.

Speaking to ManUtd.com, Sancho reflected on what went wrong last season and how things can change. He said:  ‘Last year wasn’t great and I feel like everyone has something to prove for this upcoming season.

‘We don’t want to put performances in like we did last year and upset the fans. Some fans travelled for a long time to get to the stadium and watch us not perform.

‘I’m sure, this year, everyone is going to make up for that and make sure every game we play we put 100 per cent in and make sure the fans are smiling at the end of the game.’

United will be without European football  this season after finishing a disappointing sixth in the league last year.

Sancho also touched on the impact ten Hag is having at Old trafford. He continued: ‘The training, especially in pre-season, has been a real positive and all the lads have taken on board what he’s saying [ten Hag].

‘You can see it in the games, we’re creating a lot more chances, keeping the ball more and just making good things out of the style we’re playing.

‘This pre-season, we have the same players, but it just looks like a whole different team and I do think that’s something we’re working on and I feel like we’re getting better.

‘The manager is big on team-bonding and having fun together and doing things like team dinners and things like that. So, yeah, it’s helping.’

The Red Devils get their league campaign underway with a home clash against Brighton on Sunday, August 7.