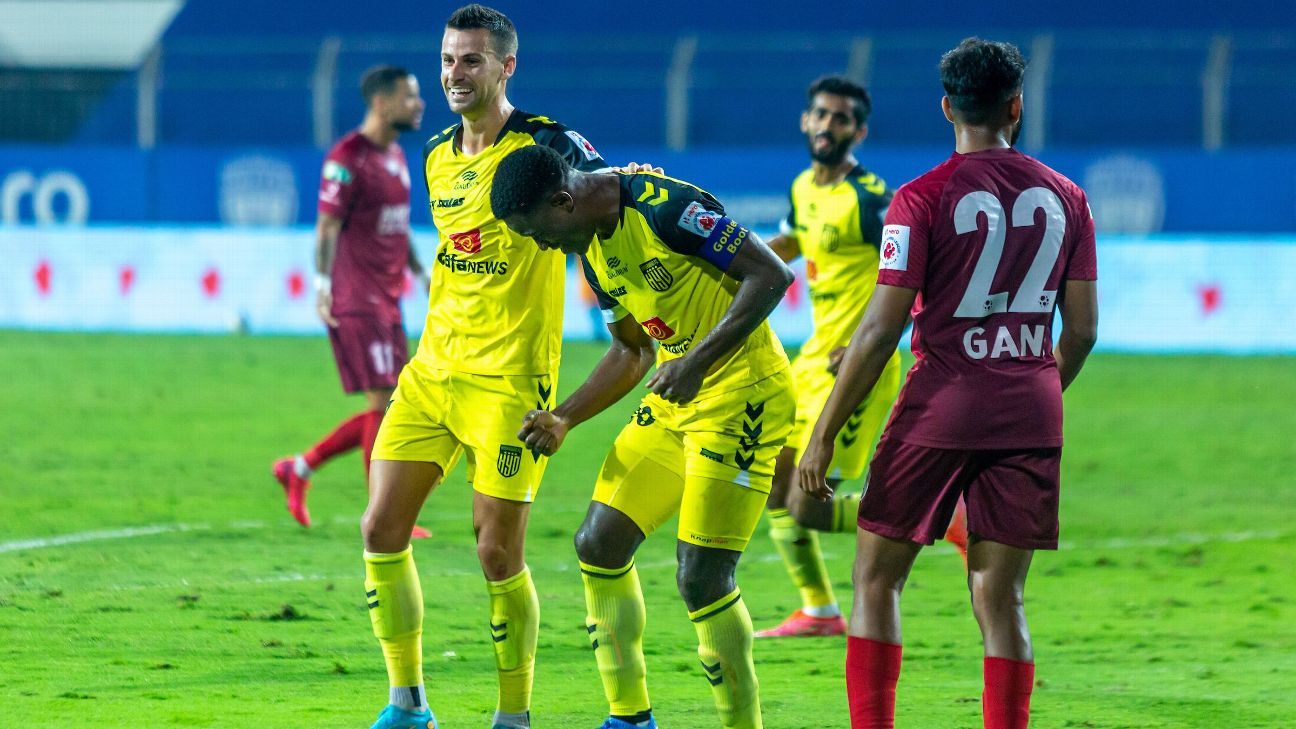 Week 11 of the Indian Super League and the battle for the playoff spots remains as unpredictable as ever. Teams written off after a poor start are coming back into the conversation, while prematurely crowned champions continue to falter. Either way, we’re set for an intriguing final two months of the season, with plenty of moves made in the transfer market as well.

Can Ogbeche lead Hyderabad to the promised land?

Bart Ogbeche now has the all-time goalscoring record in the ISL, scoring his 49th against NorthEast in a 5-0 thrashing. The goal itself, perhaps may not be memorable, with Ogbeche fortunate to bundle it home from close range. It was a bit of an anti-climax, but Hyderabad’s performance was anything but.

Manolo Marquez has built a side that has a beautiful efficiency about it – Aniket Jadhav and Akash Mishra torment defenders down the left, while Nikhil Poojari and Ashish Rai do the same down the right. Juanan and Joao Victor keep things tight in the middle, while one of Joel Chianese or Edu Garcia creates. And Bart scores. And Hyderabad win.

It’s a consistent recipe, and while others have faltered with Covid, injuries, postponements disrupting things, Hyderabad FC keep things ticking over with a calm competence that stems from their manager. Manolo Marquez has been in management for two decades and doesn’t have the most impressive resume, with a solitary trophy with Las Palmas B. However, with Ogbeche unlikely to stop and his Indian charges lighting up the fields in Goa, one wouldn’t bet against the League shield ending up in Hyderabad.

Who’s going to stop them?

Kerala Blasters had an unhappy return to the pitch after COVID had wreaked havoc through their squad, with a 0-1 loss to Bengaluru. The Blasters experienced football for the first time in 18 days and looked understandably rusty. Their opponents however, were playing their third match in eight days – if anyone’s looking for consistency in a Covid-affected season… you’re not going to find it.

The prevalent feeling amongst most players is one of fatigue regarding the protocols, with Jordan Murray’s despondent tweets from isolation laying bare just how mentally taxing this season has been. However, Hugo Boumous, clarified his thoughts on the matter – the pitch is always an escape.

Fed up about all restrictions/protocols/ quarantine. Not fed up to play Football. This, never. https://t.co/K1U4BEvTqD

The spate of Indian match-winners

There was understandable consternation ahead of the season, with the ISL introducing the four-foreigner rule for the first time. It’s taken a while but we’re finally starting to see the fruits, as more and more Indian youngsters come to the spotlight. It’s not even in peripheral roles, we’re starting to see Indian youngsters grab games by the scruff of the neck and … win them.

Of the six victories this week, Indian footballers have scored winners in four of them. Mr. Menon already waxed lyrical on the meaning of Kiyan Nassiri’s hat-trick in the Kolkata Derby. Naorem Roshan’s impressive season had gone under the radar in many circles, but he grabbed a fair few eyeballs with a stunner of a free-kick against Kerala Blasters to win the game for Bengaluru FC. He’s second only to Adrian Luna in terms of big chances created this season and is knocking heavily on Igor Stimac’s door for a call-up to the national side. Fellow left-back Akash Mishra has also been amongst the goals for Hyderabad, while Udanta Singh seems to have found some of his mojo back as well.

Come rain, come shine, xG comes for us all. Bengaluru FC’s poor start to the season was always underlined by the fact that they were underperforming in their expected goals column. It’s come home to roost now, as the club are second only to Hyderabad in terms of xG and have finally begun to find the net. Perhaps all Bengaluru needed to do was rely on themselves as a sum of their parts as opposed to individual brilliance.

There was a moment in the 3-0 win against Chennaiyin that exemplified it – Sunil Chhetri had waltzed into the box and left the entire opposition defence on the floor, and with a historic record in sight, with a goal for the ages on its way… opted to pass it to an unmarked Udanta Singh with a clear shot on goal. xG does come for us all, eh?

Curiously, whether it was Covid or the compressed schedule that forced his hand, Marco Pezzaiuoli has been forced to field most of his Indian players, with only 2-3 foreigners starting in their 3-0 win over Chennaiyin and the 1-0 win over the Blasters. The ‘philosophy’ as ever remains unchanged – BFC are third-highest in possession stats and are second-best in winning the ball in the final third. The club are in the playoff spots and can legitimately dream of making it to the top four.

The defending champions played their first game in 15 days when they took on NorthEast United, but could consider themselves lucky to walk away with a point after the league minnows had been all over them in the final third of the match. Igor Angulo’s absence was truly felt, as even though Ahmed Jahouh and Cassio looked creative the final touch was severely lacking from Bipin Singh and Vikram Pratap Singh.

Brad Inman has looked underwhelming so far, and Des Buckingham is fast looking at a title challenge morphing into a battle for finishing fourth. The signing of Lallianzuala Chhangte from Chennaiyin FC is a statement and a half though, as Mumbai flex their financial muscles once more. All that’s left is a bit more flexing on the pitch…