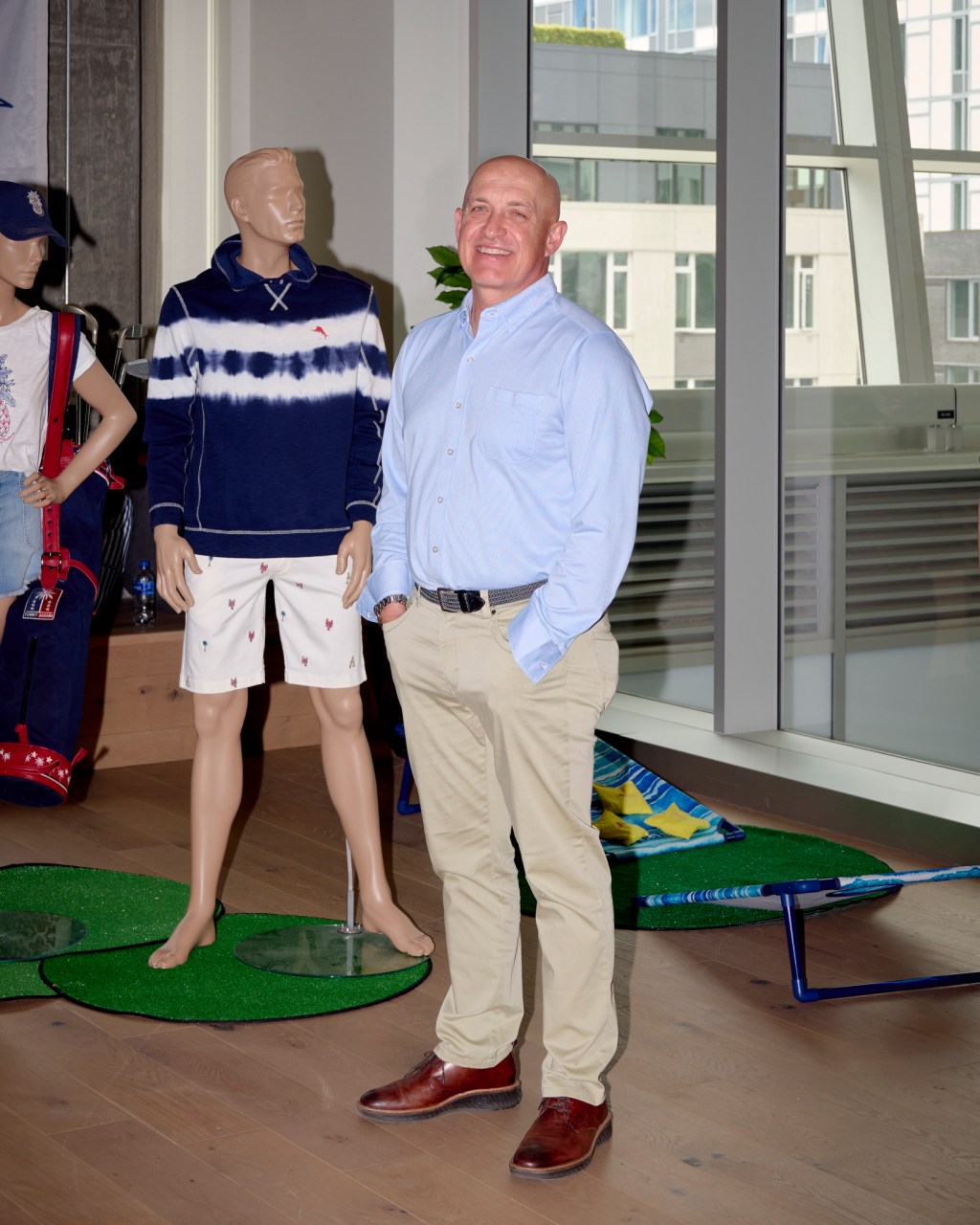 The Washington state native had a background in aviation, not fashion, but decided to make the leap more than two decades ago when Tommy Bahama was essentially a men’s silk camp shirt brand focused almost exclusively on wholesale. Since joining the brand in 2001 as chief operating officer, before being elevated to chief executive officer in 2016, Wood has worked tirelessly to transform the business into a successful and profitable omnichannel brand with record sales of $724 million in fiscal 2021. Here, Wood traces the evolution of the business and its unwavering focus on creating and building an upscale island-focused lifestyle label.

WWD: What was Tommy Bahama like when you joined?

Doug Wood: There were so many things that didn’t work. We were making money and there were 1,000 employees, but they didn’t have an HR team, they had no systems at all. They had retail stores and a couple of restaurants already, but payroll was a massive issue, not because they didn’t have the money, but they couldn’t get the function of payroll to work. The founders were amazing, they built a strong, incredible men’s brand around wholesale. We had a company that was built in silos: a men’s division, a women’s division, very much set up for wholesale. But what I’ve been trying to do since then is build a strong company with the strongest people possible and get them working together and collaborating.

WWD: It certainly is a different company today.

D.W.: Yes. Wholesale is still so important to the brand. But we had to figure out how to deliver much stronger messages through our digital, e-commerce and stores. How do you do that without squishing the others? It starts with product. In the recession of 2009, our wholesale business contracted 40 to 50 percent and we were 80 percent wholesale, 20 percent direct. We had just launched e-commerce. So we were watching these businesses contract all around us but our e-commerce took off like a rocket. And a light went on: the guest still wants the product, so let’s figure out how to go direct with our messages, our branding and our product. Ever since then, we’ve been watching that side of our business just take off.

D.W.: When you roll restaurants into the number, wholesale is somewhere between 15 and 17 percent. And we focus on a full-price business. That’s not to say we’re not on sale. We clear goods after they’ve been on the floor for 90 days. But our intention is to run a full-price, clean business, which has been challenging through the years, but if we intend to continue to grow the brand we’ve got to have a full-price stance.

WWD: Tommy Bahama has always been known for its silk camp shirts. How much of the business does that represent now?

D.W.: Today, our men’s silk shirts make up about 20 percent of our total. When I started, we didn’t really have a knit business or a third-quarter business. But we’ve evolved. There are lots of cautionary tales in the market where people who were known for one thing were going off chasing new or younger guests. That’s just one of the things that I’ve held true to since I’ve been here. We’re the island-inspired company so when the guest comes here, they better not walk around and see all black. There are lots of people who would love to take over this spot, but we’re not leaving the island.

WWD: Who’s your target customer and are you trying to attract a younger consumer?

D.W.: We’ve been in business for 30 years, so the 40-year-old when we started is now 70. But I’m bringing in a whole new crop of 40-year-olds. And I still have the 70-year-old. It’s basically about bringing innovation to our products that the 40-year-old knows from the performance and technical world but is fun and not as serious. Our guests are active and they’re living their lives completely differently so we’ve transformed the brand to the new way people live. Like in our restaurants, there are healthy choices. We still have the coconut shrimp, but we also have an ahi tuna bowl.

WWD: So who is your customer?

D.W.: I’ve always put the goalposts out there that we’re between 35 to 65 and we probably skew closer to the middle than the front end of that goalpost. Same thing with women. We’ve always had a women’s guest, we just didn’t have the right product. To this day, 90 percent of our purchases are made by women, both in stores and online. I’ve watched them walk down to the women’s side of our floor and walk out, so I knew we were not hitting the target. Now, I’ve got product for them. And that’s something that we’ve only hit in the last couple of years, and it’s accelerated during COVID-19. I believe that 85 percent of disposable income is held in the hands of people 40 and older, so I’m going to stick with where the money is.

WWD: How much of your overall sales does women’s represent?

D.W.: It makes up approximately 33 percent of our business. And that’s with a growing men’s, restaurant and wholesale business. Women’s had always been one of our laggards at wholesale, but we’re growing that at a substantial rate, too. That has everything to do with Bradley [O’Brien, executive vice president of design] and Julie Snow, who heads women’s design, and our women’s swim, which is still a small percentage but it outpunches its weight.

WWD: You mentioned restaurants. Other brands have restaurants, but they lease them out to restauranteurs to run. Why do you want to run the restaurants yourself?

D.W.: Where we have restaurants and retail together, retail performs about two times better per square foot. But why run them ourselves? Well, it says Tommy Bahama above the door. If you have a button fall off a shirt, you’re not going to stop buying product from that apparel company. But if you get food poisoning, you’re never going back. When you hear our name, it inspires you to relax and exhale, and the restaurants allow us to do that. I would never want to turn that responsibility over to a third party. If I could, I would put a restaurant into every one of our retail stores — look at the numbers. The problem is you can’t put a full-size restaurant into every store, it just doesn’t work. So we pulled in Rob Goldberg [executive vice president of restaurants and bars] and said, we’re going to give you a patio, a kitchen and a bar, and the kitchen needs to be the size of a food truck. And we [came up with a concept we called the Marlin Bar] and we put the first one in Coconut Point in a B-minus mall and the business exploded because people are coming back three times a week after shopping just to drink and eat. We would not have been able to do that with an outside company.

WWD: You can’t go to a beach anywhere where you don’t see everybody sitting on a Tommy Bahama lounge chair. Where do licensed products fit into your strategy?

D.W.: The lounge chair is a great story. Chrisann Furciato, my SVP of licensing, came to me when we were really concerned about just keeping the lights on and said, “Hey, would you want to do beach chairs?” The founders had just left and I’m watching a 40 to 50 percent dip in our business. So I asked, “Where are you going to sell them,” and she said Costco. She made a compelling argument: they were going to guarantee a quarter of a million dollars, so I said, “Let’s take it.” That business has turned in to a monster. And it has led us to a strong beach business too. Before, we were just a silk brand that sold some swimsuits. But now, we have a big business around the beach: women’s swim, men’s swim, T shirts and cover-ups — and all those things I attribute to the beach chair. And that’s how we’ve approached all of our licensed businesses. Licensing is uncomfortable because you have to let go, but if you want to move into a category that you don’t know that much about, you go to somebody who does. We’ve launched a spirits line [with Coral Cay Distilling] because Tommy Bahama and drinking go together, but I’m never going to do that by myself. Same with furniture. For 2022, Oxford is saying we’ll top $850 million in sales but if you take our licensing businesses at retail, we’re closer to $1.3 billion.

WWD: How closely do you work with your parent company, Oxford Industries?

D.W.: It’s our 30th anniversary but it’s actually 20 years since Oxford Industries bought us. And I can’t emphasize how instrumental that purchase was to how why we’re doing today. They bought into our vision and allowed us to run a full-price business. And that’s Tom Chubb [Oxford’s CEO]. They were a private label company and we were the first brand they bought. I was chief operating officer at the time and I thought in six months I’d be gone, But they supported us, they saw the vision and they stuck with us. And for a public company, that takes a lot. I’m asking for $20 million to $30 million in capital each year with the expectation that we’re going to give them a return, but that return may not be next year. But Oxford takes a long-term view of shareholder equity.

WWD: So where do you see Tommy Bahama 30 years from now?

D.W.: Right now, we only have international operations in Canada and Australia. So I see the brand becoming more global. With all our areas of business, we have an opportunity to grow: men and women’s apparel, restaurants. Our goal has never been to be the biggest. At the end of the day, we have a very specific vision: to deliver this amazing Island experience that allows you to relax and exhale. Someone’s going to take over my job someday. And their job is to build upon what we’ve been doing and find new avenues deliver that lifestyle message.