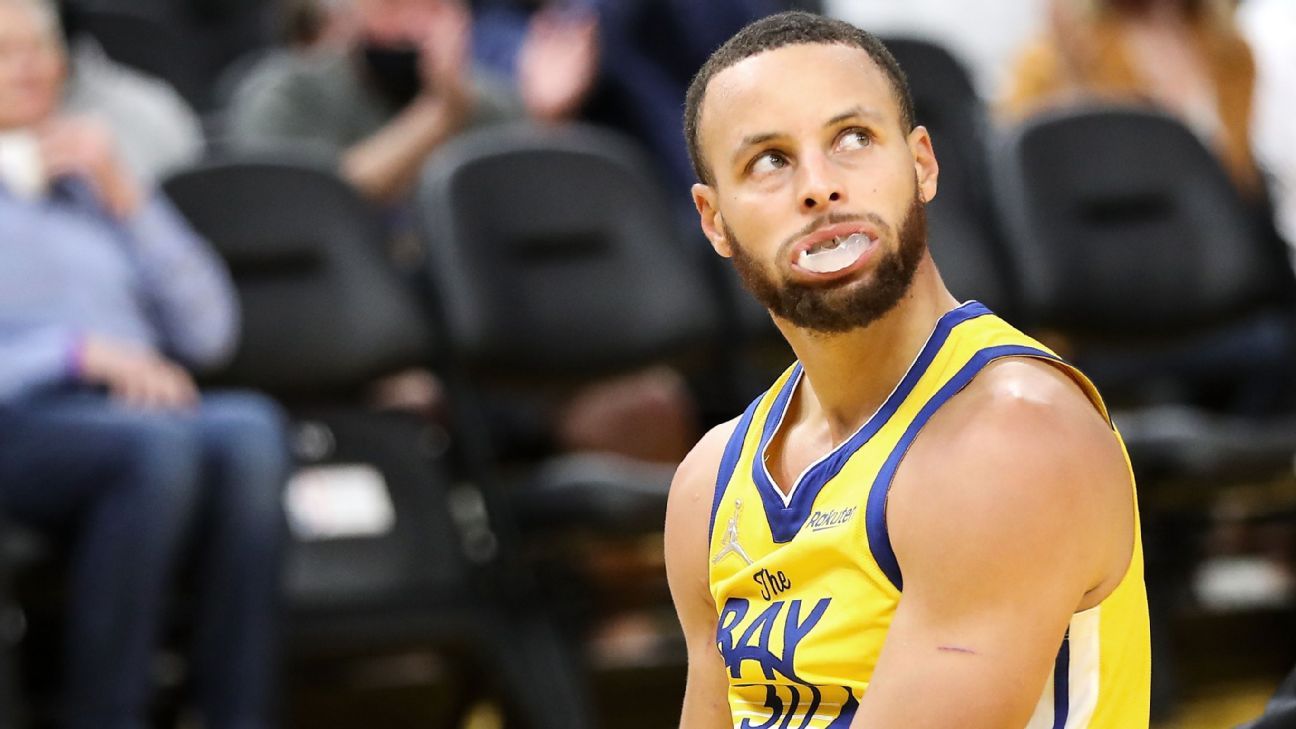 SAN ANTONIO — The Golden State Warriors were without more than half of their active roster, including Stephen Curry, on Tuesday night against the San Antonio Spurs.

The Warriors stormed from behind late and took down the Spurs on the second game of a back-to-back, 124-120.

Golden State outscored San Antonio 35-16 in the final quarter. Jordan Poole led the way with a game-high 31 points, including a go-ahead 3-pointer with 17.9 seconds remaining,

“Our vets who didn’t play are so excited in there,” Warriors coach Steve Kerr said, adding it was “a fantastic win for us.”

After dropping 40 points against the Houston Rockets on Monday, Curry was listed as out due to left toe soreness. Golden State also was without Andrew Wiggins (left knee soreness), Otto Porter Jr. (left foot injury management) and Nemanja Bjelica (back spasms).

Kerr said before the game that it was an easy decision to have the players sit out because they are “genuinely nursing” injuries.

“Steph hurt his toe last night mid-third quarter … and then Wiggs’ back tightened up,” Kerr said. “With Otto, we were hoping he was going to be able to play tonight, but he also had a back issue. In light of where we are right now and the idea of giving him a couple more days before our next game, it felt like that was a wise choice.”

Those four players joined several others who were already expected to miss Tuesday’s game.

Kerr on Monday said guard Klay Thompson would not play against the Spurs, following their plan to rest him on one end of back-to-backs as he comes back from his 2½-year hiatus.

Andre Iguodala (left hip injury management) missed his seventh consecutive game, while Draymond Green (lower back disc injury recovery) missed his 15th straight, including the Jan. 9 game when he played only seven seconds of Thompson’s first game back. James Wiseman (right knee injury recovery) hasn’t played since last season, and there is no timetable for his return.

The Warriors said Green is making positive steps in his recovery from a “left L5-S1” disc injury and that he will be reevaluated before the All-Star break.

“I talked to Draymond today, and he told me he’s been out on the court now the last couple of days and is feeling really good,” Kerr said. “He’s making good improvement. … But he’s not going to be ready to play in the next few days or anything like that. He’s going to continue with his rehab and we will re-evaluate with him just before the All-Star break.

“We’ll go from there. But so far so good. We are just being very cautious and very patient, understanding that it’s a delicate injury and you can’t rush this one. It’s really impossible to predict when he is going to play. But all of the reports, including from him, have been very positive.”

Green, 31, has had a resurgent season for the Warriors, averaging 7.9 points, 7.6 rebounds and 7.4 assists while shooting a career-high 53.7% from the field.

The Warriors were left with only one regular starter in Kevon Looney. He played alongside lottery picks Jonathan Kuminga and Moses Moody, role players Gary Payton II, Juan Toscano-Anderson and Damion Lee, and two-way players Chris Chiozza and Quinndary Weatherspoon.