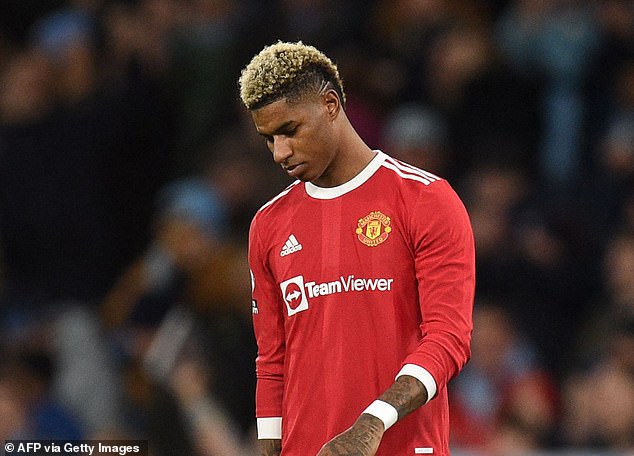 Gary Neville says Man United will have FAILED if Marcus Rashford leaves, as he tells the club to ‘sort it out’ and warns an exit would be ‘lose/lose’ after Ralf Rangnick admitted frustrated star could go

By Adam Shergold for MailOnline

Gary Neville believes Manchester United will have ‘failed’ if Marcus Rashford is allowed to leave amid speculation over the striker’s Old Trafford future.

Rashford was left on the bench for last Sunday’s Manchester derby against City despite Cristiano Ronaldo, Edinson Cavani and Mason Greenwood being unavailable and made little impact when introduced in the second-half.

It seemed to indicate Rashford’s reduced standing at United with the 24-year-old starting just two of the last eight Premier League games he has been fit for.

Marcus Rashford has struggled for form this season, leading to speculation he may leave Manchester United during the summer transfer window

He has also struggled for form this season, scoring only five times in 24 appearances since returning from shoulder surgery.

On Friday, interim manager Ralf Rangnick addressed the possibility of Rashford leaving United during the summer window while also denying the forward was unhappy.

And club legend Neville believes it will be a disaster for both Rashford and United if the academy graduate is allowed to leave.

The former defender tweeted: ‘Rashford – 1. A failure for United’s football department if he leaves.

‘2. A very poor look for MR if he can’t get his form right to break into this team.

‘3. MR/Team would be naive if they think his off-pitch voice will carry without the MU badge.

Gary Neville has urged United to do everything to keep hold of Rashford, saying ‘sort it out’

In replies to other tweets, Neville said Rashford’s social platform and charity work was amplified by being at United

Rashford, whose current United deal expires in 2023 with the option of a one-year extension, gained widespread praise during the Covid pandemic for his work campaigning for free meals for schoolchildren from poor backgrounds.

He was made a MBE in December for services to vulnerable children in the UK.

In response to tweets suggesting Rashford’s charity work shouldn’t be linked to being a United player, Neville said: ‘It’s just a proven fact if you play for United you will gain more traction and reach with your voice. This isn’t just for Rashford. It’s for all of us that played for the club.’

In another reply, he said: ‘It’s just a proven fact that your voice gains the maximum reach and exposure if you play for United.

‘He has aspirations to be a voice off the pitch which is great but he wouldn’t be as heard without the MU platform. That goes for me and other United/Ex-United players as well.’

Speaking ahead of United’s home fixture with Tottenham Hotspur on Saturday evening, Rangnick said: ‘I spoke with him yesterday and there was no mention of him not being happy here.

‘Suppose he and his agents or his family at one stage think about maybe going to another club, well then he can do that but in the summer. Now the window is closed.

‘We should just finish this season as well as we possibly can and then there is enough time in the summer to speak about that. Right now, nobody knows who will be the manager, how the club will be lined up in the hierarchy.’

Rangnick insisted that Rashford has all the qualities to be a top player but urged him to re-produce the form he shows in training on match days.

‘To play in the same level he trains,’ said Rangnick when asked what Rashford must do to get back in the team ahead of the home games against Tottenham and Atletico Madrid.

‘We spoke about that week two weeks ago. Marcus is training well, he’s got an abundant of talent, everything you need for a striker. It’s about transforming the training sessions into the games.’