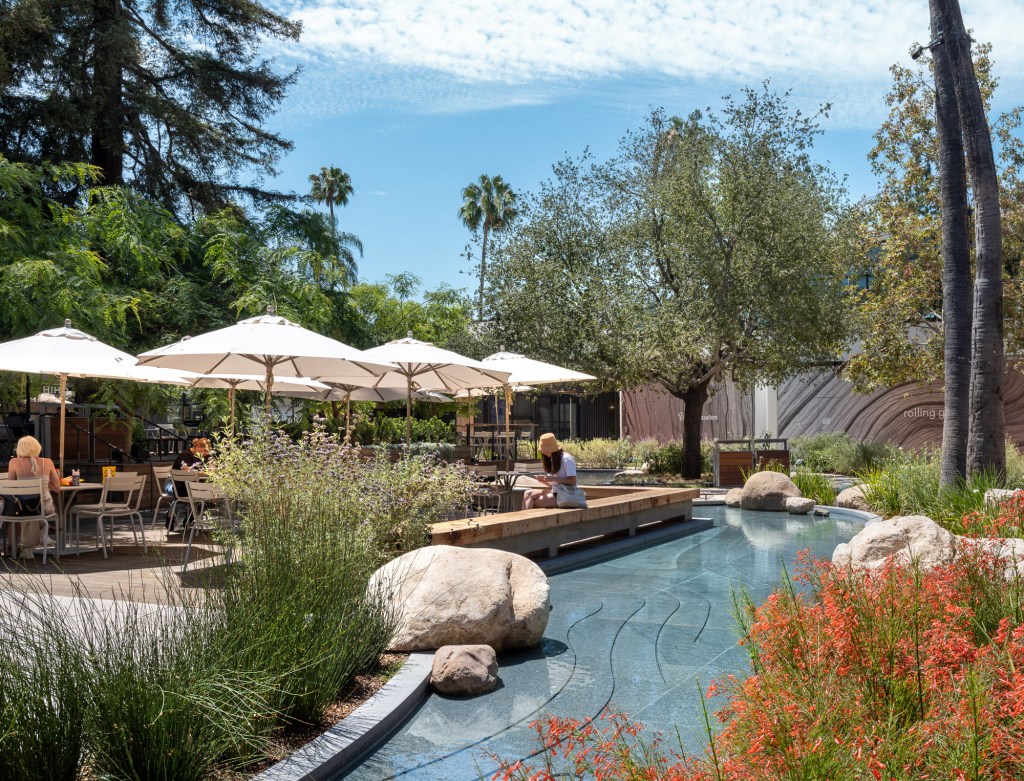 What used to be a fishing hole for old Hollywood celebrities is now an upscale neighborhood shopping center not far from some of the more important movie and television studios in Southern California.

The Shops at Sportsmen’s Lodge in the Studio City area of Los Angeles debuted last November as a $100 million project with a handful of store openings. Now that the venture is 100 percent leased, more outposts are building out their spaces with plans to open by September or beyond.

Fred Segal is probably one of the most recognizable names in the clothing store lineup. It is a longtime Los Angeles luxury retailer with few stores in Southern California. There is one shop in Malibu and another in West Hollywood. This will be the famed store’s first location in the San Fernando Valley — known for its Valley girls and nearby locations for CBS Studio Center, Warner Bros. and Universal Studios.

Other clothing concerns coming to the 95,000-square-foot shopping center are Reformation, the Los Angeles label praised for its sustainable apparel and accessories lines, and The Great, the women’s ready-to-wear collection created by Emily Current and Meritt Elliott, best known for starting the popular Current/Elliott contemporary denim label in 2008 with designer Serge Azria. Current and Elliott left the denim label in 2012 to launch new projects.

Other stores opening later this year are Madewell, part of J. Crew; Stevie Sister, an independent multibrand clothing store with one other outpost in Newport Beach, California, and Allbirds.

Currently open are Vuori, which sells its performance apparel online and at 19 stores across the country, and Free People Movement, the athletic apparel venture by Free People.

“We were focused on bringing a mix of tenants that, number one, served the neighborhood,” said Ben Besley, senior vice president of development for Midwood Investment & Development, which owns and operates the shopping center.

The shopping center, dominated by four historic redwood trees on the property, is a mix of clothing companies, restaurants, wellness ventures and an Erewhon Market, which right now is the shopping center’s anchor tenant. The upscale natural foods grocery store with only seven locations in Southern California is so different it was extensively profiled in a New York Times article last year when the pandemic made it a popular hangout spot for health-conscious L.A. foodies looking for an alternative to closed restaurants.

Development of the shopping center, designed by architectural firm Gensler, focused on bringing in stores that were unique. Vuori has been very particular about where it plants its retail pole, and Stevie Sister, a multibrand women’s clothing shop, is independently owned and has only one other location in Newport Beach, California.

Fred Segal is also a brand with limited locations with only five stores in Los Angeles, Las Vegas and Seoul, South Korea. The Great has only three stores in Southern California — in trendy Venice, West Hollywood and Newport Beach.

“Our team has been constantly sourcing to find the best retail, lifestyle and food and beverage brands to bring to The Shops at Sportsmen’s Lodge ever since development of the center began,” said John Usdan, chief executive officer of Midwood Investment & Development, based in New York.

In 2017, Midwood acquired the property where the shopping center now stands. It used to be a 70,000-square-foot events center that was a popular place for weddings and other family celebrations. At times there were as many as three weddings a day.

The events center sat next to the Sportsmen’s Lodge, located in an area once famous for its fishing trout ponds dating back to the 1880s. The ponds went commercial with the founding of the Hollywood Trout Farms in 1913. In 1945, at the end of World War II, the property was renamed the Sportsmen’s Lodge with a restaurant and cocktail lounge.

Guests were given fishing rods and bait to catch their trout dinners. Because it was located near Republic Studios, where movie filming took place, it attracted a celebrity crowd including Bette Davis, John Wayne, Lena Horne, Tallulah Bankhead, Clark Gable, Humphrey Bogart and Lauren Bacall.

In 1962, a modern Sportsmen’s Lodge Hotel was built next to the original lodge and trout fishing ended in the early 1970s when an earthquake diverted the natural spring that fed the ponds.

Midwood became an investor in the lodge in the ’60s and owns it today. The 190-room hotel has been closed to tourists since the pandemic. It will be torn down to make way for construction of the Residences at Sportsmen’s Lodge with 520 apartments next to the neighborhood shopping center that soon will be housing an Equinox fitness center.

One of the shopping center’s attractions is the well-designed landscaping that design firm Olin created around a meandering body of water made to resemble a stream in a park-like setting. Nearby, a raised wooden deck underneath old redwood trees overlooks the plantings of coast live oak as well as California sycamore and Golden Rain trees. Drought tolerant plants and boulders complete the natural look.

“This is a place that people can come not just to shop but to spend time appreciating the environment,” Besley said. “This is a unique property because it is so large.”