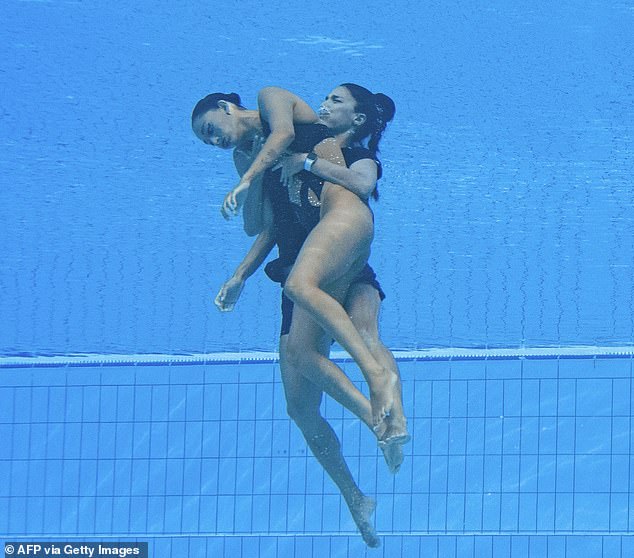 The International Swimming Federation (FINA) have reportedly launched a review of their rules and regulations after it was revealed that lifeguards were prevented from being able to immediately assist a US synchronised swimmer after she had passed out.

Anita Alvarez had fainted after completing her routine at the World Championships in Budapest, falling unconscious and sinking to the bottom of the pool.

Only the quick intervention of her coach Andrea Fuentes saved her as she was first on the scene to dive in as motionless lifeguards failed to react.

Fuentes claimed she had motioned to the lifeguards to help but claims they did not see her.

However, it has been revealed that the lifeguards’ slow reaction times were due to them being unable to dive into the pool until they had been given a signal by the competition’s referee.

‘According to the regulations, (the lifeguards) can only jump into the pool after receiving a signal from the body of referees,’ sports cardiologist Bela Merkely, who is part of FINA’s Sport Medicine Committee, was quoted by Marca.

He explained the reasoning behind the rule was ‘in case of a possible misunderstanding.’

Merkely added: ‘After the coach jumped into the pool, the lifeguards, seeing the situation, no longer waited for the signal from the judges and intervened.’

Fuentes said Alvarez ‘was not breathing’ when she reached her but was revived and checked for signs of damage after the terrifying incident.

Alvarez has described ‘not feeling too great’ before she fainted but is still keen on competing in the team final on Friday.

Alvarez’s name is down on the team sheet to compete in the team free final alongside seven US swimmers – but that does not necessarily mean she will take part.

Shortly after her team posted an Instagram update saying she had recovered, the swimmer was seen back among her team-mates enjoying a meal.

She told NBC Nightly News over her ordeal: ‘I mean I say this all the time to her and to other people, [I’m] just so grateful to have her as a coach.

‘When I found out she was coming to be our coach, it was like, I didn’t believe it.’ On the incident, she said: ‘I remember feeling like it was a really great performance.

‘Like, my best one by far and not only just how I performed but just that I was actually enjoying it and really living in the moment too.

‘So, because of that I feel really happy and really proud.

‘And then at the very end, I do remember like the very last arm I did, I gave like, it’s such a simple small arm.

This is the second time Alvarez has fainted in a pool during a competition, with Fuentes again coming to her aid during the Olympics qualifying event in Barcelona (pictured)

‘But I was like give everything until the very end and I did that and then I remember going down and just being like, kind of like, ‘uh-oh, I don’t feel too great.’

‘And that’s literally the last thing I remember actually.’

Amazingly, it is the second time Fuentes has saved the swimmer after she was filmed diving in and pulling her to safety when she fainted in the pool during an Olympics qualifying event in Barcelona last year.

Alvarez regained consciousness soon after being rescued from the Budapest pool, received immediate first aid and is reportedly recovering well.

US synchronised swimmer Anita Alvarez, who was dragged out of a pool in Budapest after fainting in the water, has posted a video of her smiling and eating with her team as she told fans she is ‘ok and healthy’

Footage of Wednesday’s event shows the US swim team celebrating as Alvarez finishes her solo routine before realising something is wrong and moments later, the 25-year-old is seen being dragged from the pool by Fuentes and a male lifeguard.

Fuentes later revealed Alvarez stopped breathing for ‘at least two minutes’ during the ordeal following her performance in the women’s solo free event.

‘I tried to wake her up. Well, I slapped her and opened her jaw. But the truth is that until after we got to the emergency room, she did not breathe for at least two minutes,’ Fuentes said during a Spanish-language interview on Thursday night.

It is the second time Anita Alvarez (left) has fainted in a pool during a competition, with Fuentes again coming to her aid during the Olympics qualifying event in Barcelona

Last year 25-year-old Alvarez (right, in USA team kit) fainted during an Olympics qualifying event in Barcelona, where she was also rescued by Fuentes

Alvarez (pictured) regained consciousness soon after being rescued from the pool, received immediate first aid and is reportedly recovering well

Despite her ordeal, the 25-year-old was still keen to compete for USA in Friday’s team final