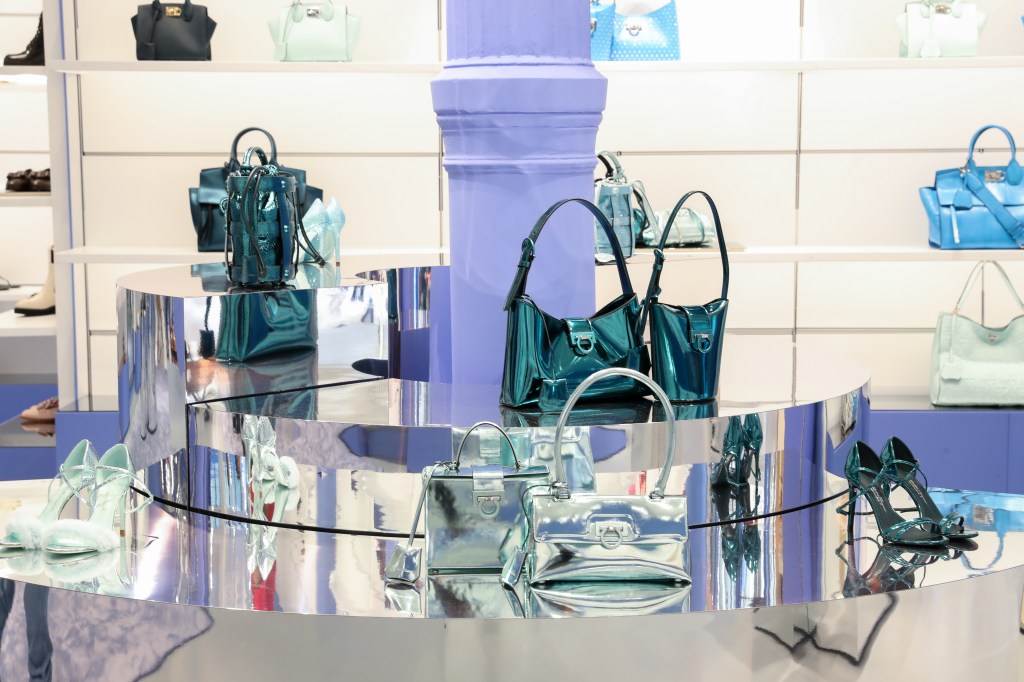 Salvatore Ferragamo has opened its first “concept” store, a 2,700-square-foot space in the heart of SoHo that’s immersive, modular and collaborative in character and design.

“It’s a more youthful and modern expression of our brand,” Daniella Vitale, chief executive officer of Ferragamo North America, told WWD, during a tour of the store two days before Friday’s launch.

The main attraction is, of course, the assortment, which is filled with exclusives for the SoHo crowd. Among the standouts, the $3,000 Studio bag in printed canvas with a SoHo logo and signature Ferragamo “Gancini” hardware, as well as Ferragamo’s metallic leather box bags, glittery beaded Marilyn pumps, and the sustainable “6r3ene” unisex sneaker with an upper created from recycled fishing nets and overlays composed of overcuts of suede.

The sneaker is “super comfortable” and customizable in a unique, do-it-yourself way, Vitale explained as she led her guest to a touch screen in front of a monitor depicting a floating, 3-D hologram of the 6r3ene. Using the touch screen, shoppers can change up the sneaker’s color, laces, its counter and other elements — 46 variations in all. Initials can be added on the sneakers, which are priced $1,150. There’s an estimated 10-week turnaround time, from when a customer personalizes a sneaker in the store to when it is created and delivered. The installation was made in partnership with De-Yan, a multidisciplinary studio.

On the other side of the store, furthering the experiential dimension, is the “NFT Booth,” a collaboration by De-Yan and digital artist Shxpir. The booth enables shoppers, in private, to choose from a selection of different stickers designed by Shxpir to create NFT art, for free. There’s a high-spec black magic camera in the booth so shoppers can see their artwork, displayed on a tall screen, changing as they work on it. Once created in store, visitors will have the opportunity to mint their unique artwork — limited to 256 individual NFTs — on the Ethereum blockchain via Opensea, with all minting fees being covered by Ferragamo. “Younger generations are expressing themselves through NFTs they put on social networks and email,” Vitale observed. “It’s a social currency.”

“Shxpir is a true pioneer of the digital art scene,” said De-Yan founder Dejan Jovanovic, in a statement. “His work is defined by a commitment to craftsmanship, just like that of Salvatore Ferragamo. What’s more, Shxpir reflects a future forward approach to art and luxury — an ethos that is integral to both the brand, and the new SoHo store itself.”

Bringing such immersive technologies into the retail setting, Vitale said, is “about being neat and cool and experiencing something different.” But they’re easy to operate and take in, she added. “We don’t want people to be intimidated.”

For Pride Month, Ferragamo is selling a limited-edition line of 250 T-shirts, priced at $350, and 150 Sweatshirts priced at $650. They’re adorned with Shxpir’s NFT graphic print artwork. The proceeds will be donated to The Lesbian, Gay, Bisexual, Transgender Center, commonly known as The Center, in Manhattan’s West Village.

While having its cutting-edge experiential side, the Ferragamo Soho Concept Store, located at 63 Greene Street, maintains an authenticity. The original brick walls and columns, so characteristic of the SoHo neighborhood, are retained and covered in conspicuous periwinkle blue paint, which is seen in other Ferragamo locations as well. The decor is dominated by the magnetic powdered coated aluminum shelving that’s modular and large mirrored display consoles that are movable to support merchandising changes and to open up the space for events.

“Our new store represents a unique opportunity to cultivate a space where people can come together, spend time, hang out, and, hopefully, experience something new,” said Vitale.

She hinted that Ferragamo’s creative director Maximilian Davis, who joined the Italian fashion house just last March, will be taking Ferragamo’s retail program to another level. By midyear 2023, Vitale said, the next iteration will be unveiled.