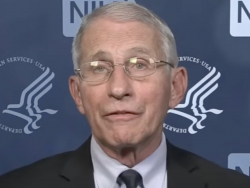 An apprehensive Dr. Anthony Fauci acknowledged he has kept an “open mind” that the COVID-19 virus originated from a lab leak in an interview with FOX News host Bret Baier on Friday.

BAIER:  I only have a couple more minutes, because I know you have to go.

But you have said that you didn’t believe that it came from a lab leak in Wuhan. Do you refute the accuracy of any of these e-mails that came out from the Oversight Committee showing top virologists warning you that the virus pointed to gain-of-function research and a lab leak?

But what — no, actually, but what we did we called a group of highly rated and competent virologists to actually look at that feasibility. They looked at the virus, and they said, we have really got to look at this more closely.

And I invite you to look and ask any one of those virologists who were there. And when they finally looked at it carefully, they said, upon relooking at this carefully now, we think it’s more likely that it was a natural evolution.

BAIER:  And you still believe that?

FAUCI:  Could it have been a lab leak?

BAIER:  There are more and more organizations that point right to a lab leak.

BAIER:  No, I mean, there are more people saying it, both here and around the world.

Now, we always must — and I will be very official about this — you keep an open mind to any possibility. And I have been of that bent from the very beginning.

But if you ask me and a lot of qualified virologists, looking at the evolution of this and the epidemiological circumstances, you talk to people that have nothing to do with us here, we look at Australian investigators, people from the U.K., people from Canada, they say, we have an open mind, but it looks very, very much like this was a natural occurrence, at the same time that you keep an open mind.

FAUCI:  No, no, absolutely…

BAIER:  When you read the e-mail from Kristian Andersen, who says, “The unusual features of the virus make up a real small part of the genome, and one has to look really closely at the sequences to see that some features look engineered,” and you say, “This is a shiny object, and it’ll go away,” it does not sound like you’re open-minded to it.

FAUCI:  Bret, I know you’re a good person. I know you a long time.

If you take a group of e-mails when people are considering and thinking out loud, and you stop there, and don’t look at the weeks of careful examination by those same people that wrote the e-mails, and then say, you know, now that we have looked at it, in the published, peer-review literature, they explain very clearly why they think it’s a natural occurrence, the same people who you stopped at this point, reading the e-mails, instead of reading…

BAIER:  No, I understand.

But they’re the same people that are getting funded by you, by you, getting money from you.

BAIER:  And they published a piece called “The Proximal Origin of SARS” in the Natural Medicine.

BAIER:  Did you help edit that piece?

BAIER:  OK. But this is where it’s going. And you know that there’s a…

BAIER:  Senator Paul and others are calling for you to testify.

BAIER:  And will you?

FAUCI:  But let me tell you, that will be fine, because what you need to do — Bret, I know you’re better than this.

You go to the people who were there.

FAUCI:  And if you think independent scientists from Australia…

BAIER:  I have got to run because I’m going to hit a computer (ph) break.

BAIER:  I know. Dr. Fauci, thank you for the time.

We will be right back.

BAIER: I want to make a quick point before we move on to this next story – the computer cut us off as that interview was moving on. Dr. Fauci finished his statement, said that he would testify again if asked by the Senate or House. He has testified more than 100 times, he says, about all of these questions that I was bringing up at the end. We thank him for his time. Wanted to give you that as the computer cut us off.