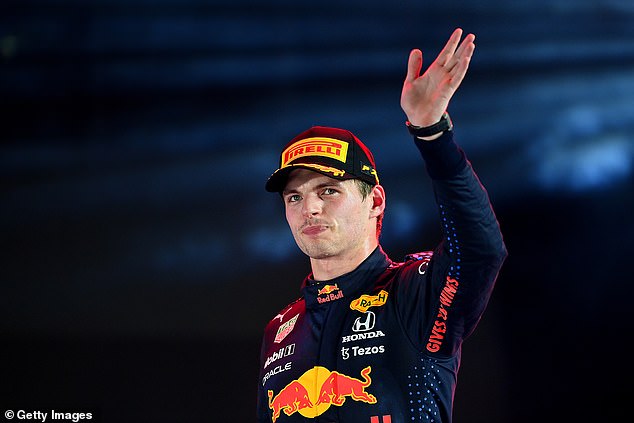 By Nathan Salt For Mailonline

Formula One champion Max Verstappen has played down talk of a rift with race stewards, despite picking up seven penalty points en route to his maiden world championship.

Verstappen found himself in the wars on multiple occasions – more often than not with Mercedes title rival Lewis Hamilton – and stewards took a dim view of his all-out attack style during the 2021 campaign.

But with the dust settled on 2021 from Verstappen’s side at least – Mercedes remain bemused at the role played by race director Michael Masi in the final race in Abu Dhabi – the Dutchman has stressed all is well between him and the stewards.

‘Overall, I had a really good relationship with the stewards, even when I saw them. There is no bad blood there,’ Verstappen said, as quoted by Motorsport-Total.com.

While there is no underlying issue from the side of the Red Bull champion, that is not to say he doesn’t believe improvements cannot be made ahead of the 2022 season, which starts in Bahrain on March 20.

‘There are always things,’ Verstappen added, ‘for example we are also looking at how we can improve as a team for next season. It’s quite natural to look at everything.’

Verstappen’s high risk, high reward, driving style is divisive among fans and it saw him hit with seven penalty points during 2021, leaving him at risk of a ban.

The 24-year-old will be well aware that a driver can only collect 12 penalty points in any 12-month period before a race ban becomes active.

Not until September will the first of those penalty points be wiped from his record and so the reigning champion faces 16 Grands Prix where he needs to tow the line.

He first picked up two penalty points at the Italian Grand Prix in September when he collided with Hamilton, rolling over the top of the Briton’s halo device above the cock-pit in a terrifying few seconds of F1 racing.

In a frantic race in Jeddah, Saudi Arabia, he collected a further three points for a series of transgressions, including late braking which led to a collision and gaining an advantage after leaving the track.

Verstappen has made peace with the stewards but it is race director Masi that continues to be the talking point of the paddock.

The governing FIA body insisted this week that no decision has been made on whether to sack Masi despite reports that he could lose his job after the controversial ending to the Abu Dhabi Grand Prix.

Reports had suggested that the FIA are planning a new race-management structure while teams are said to have been consulted over whether there should be a new race director.

Mercedes are pushing for Masi’s dismissal while the future of seven-time champion Hamilton in the sport is still uncertain.

However, a statement has urged that no decision has yet been made with findings of their investigation to be presented later this month before going for approval on March 18 in Bahrain –  two days before the first race of the season.