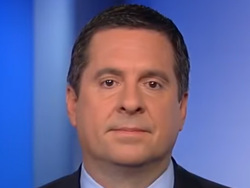 Truth Social CEO Devin Nunes discusses the DOJ’s refusal to make public the affidavit underpinning its search warrant for Mar-Lago on ‘Eric Bolling the Balance,’ August 15, 2022. “This is no different than what we have dealt with the last five or six years now. Don’t forget Eric, this is not FBI, this is DOJ working with the same corrupt people that have been around for a decade. Now look there can be very corrupt FBI agents, but this is the same whack-a-mole game we had to play, we are still playing by the way. Because the American people still haven’t seen all the Russia hoax documents. So they come in and claim people are going to die, and it’s going to jeopardize national security so therefore we are going to close and seal everything. Which of course all they are going to find is it is going to be damaging to DOJ and FBI.

Really what they need, it’s pretty clear, we need all the background information. Who did this? Who was involved? Who are the people? Whose at the FBI, whose at DOJ? Who are they communicated with? That’s the only way we are going to get to the bottom of all of this. Which is why ultimately, Congress is going to have to completely dismantle it’s entire wicked web that’s been spun over the last many years.”