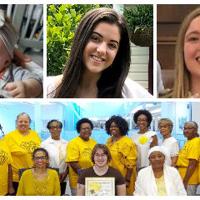 Pages assist members and staff of the House during the legislative session. They participate in daily sessions, committee meetings and perform other duties such as delivering messages and materials within the legislative complex, completing mailings for members and distributing documents or running errands in the House Chamber during daily sessions.

Historic Körner’s Folly, 413 S. Main St. in Kernersville will hold Oktoberfest from 3 to 6 p.m. Oct. 1. This year will be the 12th annual fundraising event in the spirit of a German Oktoberfest, featuring tastings of local beers and foodie favorites. Tickets, on sale now, have sold out for the last decade.

Tickets include self-guided tour of the house, beer, wine and food samples, as well as a Körner’s Folly souvenir tasting glass. Early bird tickets are $35 and will be sold through Sept. 2. Tickets are $40 after Sept. 2.

The Jackson Chance Foundation announced Eris Lee of Lewisville as the winner of their first-ever NICU (neonatal intensive care unit) Baby of the Year. This new annual campaign was born to spread awareness for NICU families. Eris Lee was born four months premature as a micro-preemie and spent 254 days at three different NICUs. Today, Eris Lee is thriving at home and gets stronger every day with targeted therapies.

The foundation’s NICU Baby of the Year highlights and honors all tiny heroes’ journeys, whether still in the NICU or fully grown. All participants shared a baby’s unique journey throughout the NICU, and the winner was based on the social engagement their story received. Eris Lee was nominated by her parents Cayce Black and Dennis Lee via social media.

As the grand prize winner, Eris won a custom gift package (valued at more than $7,700), a professional photo shoot and will be featured in a year-long campaign with the foundation.

The foundation is currently searching for its annual NICU Team Member of the Year with its annual Owl Give Award. This award offers patients, families, and other members of the community an opportunity to honor NICU team members everywhere. Winners will receive an all-expense-paid vacation. Nominations are open until Sept. 30. To nominate someone, visit www.jacksonchance.org/owlgiveaward.

Nearly 12,000 students across North Carolina will benefit from $1.6 million in grants for robotics programs approved this month by the State Board of Education. In all, 18 school districts and one charter school statewide will share in the funding to support after-school programs aimed at developing student interest and proficiency in science and math through competitive robotics.

The approved grants, recommended by a review team within the N.C. Department of Public Instruction, were selected from a total of 65 applications across the state and representing $6 million in requests – nearly four times the money available for the programs. The General Assembly included the $1.6 million, allocated from federal COVID-relief funding, in the state’s biennial budget approved last year.

The size of individual grants ranges from $24,600 to $316,950, depending on numbers of students to be served and other factors like geographic distribution, and how the program would support students disproportionately impacted by COVID-19. Grant funds may be used for several different purposes, including establishing a relationship with a robotics partner, purchasing robotics kits, costs associated with supporting a robotics team and paying stipends for coaches.

Fifty-five science centers across the state have been awarded a total of $2.4 million in grants as part of the sixth year of the North Carolina Science Museums Grant Program. The program is one of the many ways that the State of North Carolina invests in sustaining and advancing one of the most diverse and widespread networks of science museums in the country. Grants were awarded based on criteria that promote the priorities of state government, with a primary goal of enhancing STEM (Science, Technology, Engineering and Mathematics) education opportunities for the public, particularly in low resource communities.

For information about the program or to apply for the next grant cycle, visit ncmuseumgrant.naturalsciences.org.

Girl Scouts Carolinas Peaks to Piedmont has announced that Rachel Weiner of Forsyth County and a member of Girl Scout Troop 41621 has been selected as a National Gold Award Scholarship recipient from Girl Scouts of the USA.

The GSUSA Gold Award Scholarship recognizes one outstanding Gold Award Girl Scout from each of the 111 councils across the United States. Recipients are selected based on their project exemplifying the core components of the Girl Scout Gold Award and demonstrating extraordinary leadership that drives lasting change within the community and beyond. Weiner was awarded a total of $2,005 in scholarships monies made possible by Insight Global, The Coca-Cola Foundation and the Kappa Delta Foundation.

The Winston-Salem Chapter of the National Women of Achievement awarded a $500 scholarship to Callie Whicker, a recent graduate of Simon G. Atkins Academic & Technology High School on July 13 in the Dudley Room at the Forsyth County Central Library.

Whicker will attend American University in the fall to study political science and computer science.

Whicker read the essay that she submitted with her scholarship application. Following the reading, Achiever Valeria Edwards presented a certificate and a check to Whicker. Youth Achiever, CJ Emmanuel Rice made a poetry tribute. Achiever Evelyn Durham made final comments.

The chapter plans to continue providing scholarships to qualified graduates every year. Their goal is to address the National Women of Achievement’s mission of supporting youth and young adults and eliminating illiteracy.

The Kiwanis Club of Mount Airy Scholarship is awarded to a student who is a Key Club member of North Surry or Mount Airy High School. The student must have a 3.0 grade point average and demonstrate financial need. The recipient can study any program at Surry Community College.

The Kiwanis Club of Mount Airy works to promote different causes, including drug overdose awareness campaigns, the local historical preservation society and promoting organ donation through the Donate Life Campaign. The Mount Airy Chapter is ranked first in North Carolina for their work in encouraging individuals to become organ donors. Anyone interested in joining the Kiwanis Club of Mount Airy may contact McPhail at P.O. Box 705, Mount Airy, NC 27030. Members must be 18 or older.

For information about the foundation, contact Franklin at 336-386-3205 or franklins@surry.edu.