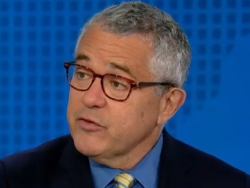 CNN legal analyst Jeffrey Toobin reacts to the Supreme Court decision on Thursday to strike down a gun law in New York: “One useful way of thinking about the way the court is approaching the Second Amendment is to think about the First Amendment. You know, we know that in the United States you have the right under the First Amendment to say pretty much anything anywhere because we have freedom of speech in the United States.”

“Now, they haven’t gone that far yet but they are clearly moving in that direction,” he said. “And, you know, we can’t separate this issue from what is going on in the world where, you know, we have a tremendous problem with gun violence in this country, we have mass shootings, we have 18- year-olds with access to AR-15s, and the Supreme Court is moving in the direction of saying the government cannot regulate that traffic at all.”